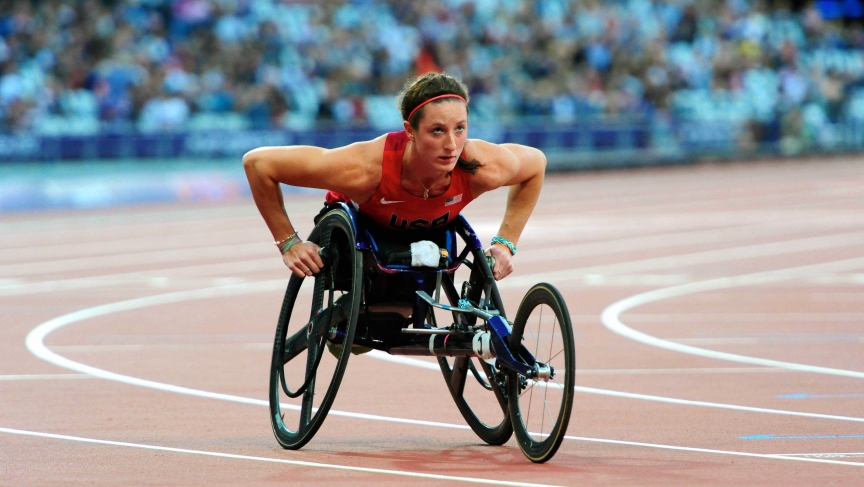 Tatyana McFadden at the London Paralympics in 2012.

Tatyana McFadden says she's only starting to realize the magnitude of her recent marathon accomplishment. A grand slam. Winning Chicago, Boston, London and New York. In a single year.

"I think its going to settle in later this week. I've put so much hard work into this. I am so incredibly happy with the win because I just wanted to close out the season with a win. It's been a phenomenal experience," she said.

McFadden was born in Russia in 1989 with spina bifida. She was adopted at age 6 and grew up in Maryland. After winning the New York City Marathon women's wheelchair race in 2010, McFadden flew to the St. Petersburg orphanage where she spent her early childhood. She gave her Marathon gold medal to the orphanage's director.

"That experience for me was fulfilling," McFadden said. "It's about going back and showing your appreciation."

McFadden won three gold medals for the US in track and field at the London Paralympics, and now has a wheelchair marathon Grand Slam as well. But, she's not satisfied and she's already got an eye on her next challenge. She hopes to qualify in cross-country ski racing for the next Paralympics in Sochi, Russia, in March.

The day after her New York City Marathon victory, Tatyana and the other winners rang the bell to open the New York Stock Exchange. But there's no rest for the weary. McFadden says she's heading back to Maryland to take exams this week, and then she'll resume training toward the end of the week.