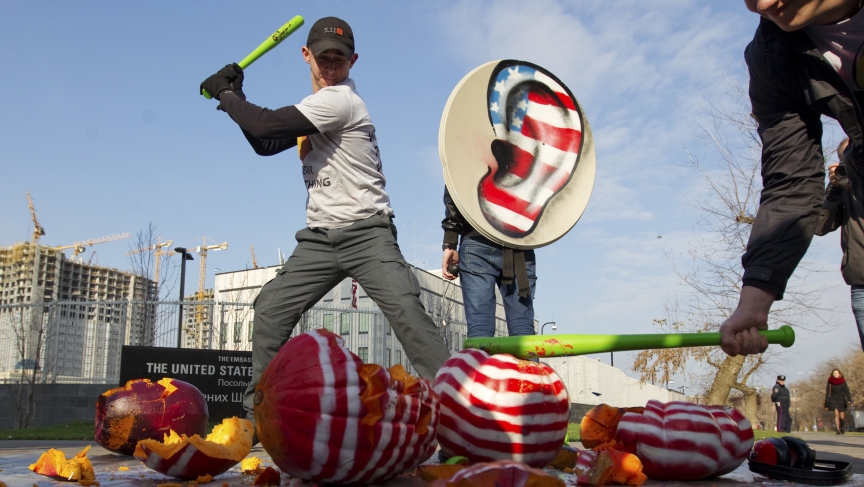 Activists from the Internet Party of Ukraine smash a pumpkin with headphones as they stage a demonstration in front of the U.S. embassy in Kiev November 1, 2013.

The US government often taps into our collective fear when it defends, supports, or justifies its spying — even if what it's doing includes torture, hacking into our email, or more recently, tapping the phones of foreign leaders.

But it's hard to come out and say that bluntly. So officials use carefully-crafted messaging.

Here are 10 talking points obtained by Leopold and Jason Smathers through Freedom of Information Act requests. They were assembled from lists developed for different purposes — for the White House, Congress, and leaks to the media. Leopold feels that people need to see these, so they'll be skeptical of what they may hear from government officials or see in media reports.

Here are examples of US officials using the talking points in public:

— Leopold says that NSA chief General Keith Alexander used a "slightly different version of a prepared NSA statement invoking 9/11 when he testified before Congress on June 18, 2013, in defense of the NSA's surveillance programs." The statement read, "I much prefer to be here today explaining these programs than explaining another 9/11 event that we were not able to prevent." Alexander also used the phrase "connect the dots."

—  PRI's The World noticed that Senator Dianne Feinstein, chair of the Senate Intelligence Committee, managed to work in both 9/11 and "connect the dots" in an October 20, 2013 Op-Ed written for USA Today in defense of domestic spying and the NSA program that tracks phone records. She wrote, "This program helps 'connect the dots' — the main failure of our intelligence before 9/11."