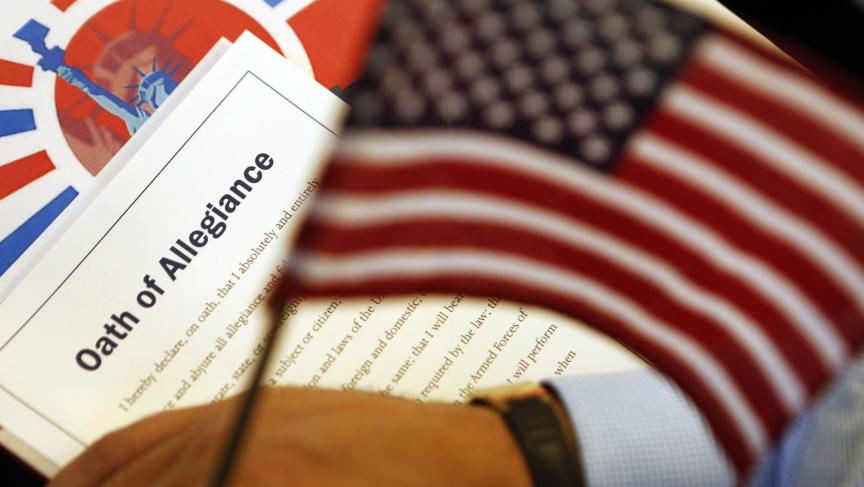 The Oath of Allegiance is held next to an American flag during a naturalization ceremony for citizen candidates in Washington, DC, on July 3, 2013.

Nearly everyone who takes the US citizenship test passes on the first try, 92 percent to be exact.

(Editor's Note: This story is part of a new series all week on PRI's The World about citizenship. There will also be an online discussion about citizenship and its place in the immigration reform debate on PRI.org on Thursday.)

But considering each immigrant pays more than $600 to take the test, it's worth asking what knowledge the exam actually tests. Is it more symbolic rather than carrying any lasting value?

Paula Winke teaches second language studies at Michigan State University. She has heavily researched the citizenship test and is a critic of it.

First, she notes the high passage rate. After paying the test fee, many immigrants enroll in study courses to make sure they don't fail. That in part explains the near-perfect pass rate — the economic stakes are too high to go into this test unprepared.

As for the test, United States Citizenship and Immigration Services, or USCIS, creates and administers the exam. It has two parts: a language section where applicants have to read, speak, and write in English, and a civics portion with 100 possible questions. Applicants are asked 10 of them and must get six right. Some are easy, such as, “Who is the president of the US?” Others are more difficult. For example, “How many amendments are there?” or “When was the Constitution written?”

A few years ago, USCIS spent millions revamping the exam, trying to make it less about memorization and more about concepts.

Julie Le Goulven doesn't think the effort was a success. Le Goulven moved to the US from France in 1998 and recently passed the citizenship test. To prepare, she simply crammed, memorizing everything the night before. Since she took the test, she says she's likely forgotten most of what she learned.

For immigrants who don't speak English, though, memorizing the material is a significant task.

At a prep class I attended in Utica, N.Y., I met Ah Mu, a 62-year-old refugee from Myanmar.

“I want to get more opportunity in US,” she said, but added that learning the information in English was difficult. “Because I'm older, my brain's not good. ... I need to try more.”

If Ah Mu studies hard enough, she will probably pass this exam. But the difficulty, including the language difficulty, isn't what bothers professor Winke. She says the real issue is that the exam is not a well-constructed standardized test. She argues the exam doesn't have a clearly articulated goal, the questions are not proven to be effective, the cut-off pass/fail score is not justified — her list goes on. Winke recently published a paper researching some of these issues.

For her research, Winke tested the exam questions on both US citizens and immigrants. Winke's premise was that, before immigrants study for the test, they should get the questions wrong that US citizens would naturally get right. In other words, the exam should prove that an immigrant has the knowledge of an average US citizen. Winke found that's not the case.

“I think we've got ten items that are working really well and 90 that are not,” Winke said.

One of the more obscure questions, she said, includes questions like “Who wrote the Federalist Papers?”

“Most Americans could not answer the question, so I'm not sure why it's on the test,” she says.

Winke has found that US citizens only outperform immigrants on local governance questions, such as, “Who is your House Representative?”

“From a test development standpoint, then you start wondering what is this test testing?” Winke says.

Testing is a science. Normally, exam companies release a “technical test manual,” or a public document that explains how questions are developed and how the exam is administered. Without a test manual, most standardized exams wouldn't be taken seriously. Big tests like the SATs, GREs and TOEFL all have them. But not the citizenship test.

USCIS spokesman Daniel Cosgrove that even though this is a test, it's a mistake to compare it to an exam like the SAT. He says the preparation content on the USCIS website give immigrants meaningful context for the questions.

“The study materials on our citizenship resource center prepare applicants for a life of engaged citizenship, not to pass a test,” Cosgrove said.

The USCIS recently announced $9.9 million in funding for innovative citizenship test prep courses. Concrete examples of how that will be done are lacking, but USCIS is hoping to make the test a more meaningful experience.

Until that revamping comes about, Eric Cohen has an idea. He directs the Immigrant Legal Resource Center in San Francisco. He says the US should give potential citizens an alternative to the test. His idea? Allow people the option to take a course instead. It would teach basic civics, but do so conceptually instead of by rote memorization. In addition, Cohen says, immigrants would learn practical civics knowledge, like how to volunteer or vote — things, he argues, would help them engage in society.

Back in Utica, Ah Mu, continues to cram for her test. If she passes it, she'll be the first person in her family with citizenship. After that, no one will likely ever ask her again who wrote the Federalist Papers.