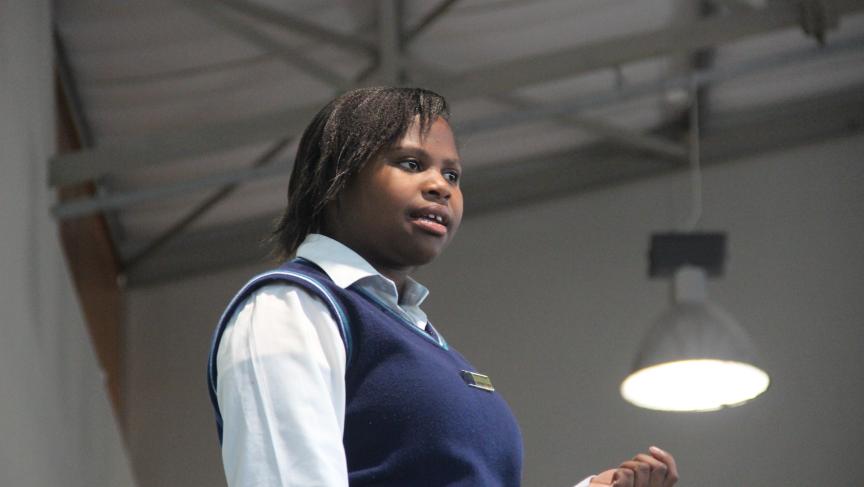 Tandie, a senior at COSAT, was hesitant to go to the mall in her school uniform.

A few weeks ago, I bumped into three COSAT students as they were leaving school. One was Tandie, whom I recently profiled in a story about the prom.  She said she and her friends were heading to the mall. It was on my way home, so I offered to give them a ride.

At first, they seemed hesitant. “We have to go home and change out of our school uniforms,” Tandie said. “Because people in the stores won’t help us if we’re in school uniforms.”

After a short discussion, they decided to give it a try anyway. They climbed into my car, and we headed to the mall. I pulled into the parking lot, and we all got out. Almost immediately, a security guard passed by.

“Shouldn’t you kids be in class?” he said, looking at them skeptically.

Inside the mall, several people made similar comments. The students shrugged each one off, informing the interrogators that school had let out early. In one case, I felt compelled to confirm their story.

It was hard to believe what I was seeing – complete strangers giving kids a hard time for being at the mall during school hours.

Since then, I’ve asked some of my South African friends about this phenomenon. Some told me it’s a reflection of communal parenting attitudes – it takes a village to raise a child. If you see kids cutting class, you say something because they’re your kids, too.

Others told me it’s about the way people see education, particularly in low-income townships. They believe it’s the only way for people to escape poverty, and they want children to help themselves, and their community.

And yet others said it’s just good old-fashioned adult bullying. One of my friends told me that in Xhosa culture adults often talk down to children, whom they see as chronic misbehavers. So when they see a child acting up, they don’t hesitate to discipline.

Regardless of how you interpret the situation, one thing is clear: students in urban townships like Khayelitsha face real pressure to go to school – even from people they don’t know.

Statistics back up this observation. According to the World Bank, the percentage of school-age children attending school in South Africa is much higher than in many African nations – well over 95 percent. That is comparable to the U.S. and other developed nations.

And yet, South Africa’s educations system is struggling. In a recent report from the World Economic Forum, it ranked 143 out of 144 nations in quality of math and science education – well below many nations with lower attendance rates.

Why is South Africa’s education system failing? There are many causes one might point to. But students bunking class does not appear to be one of them.