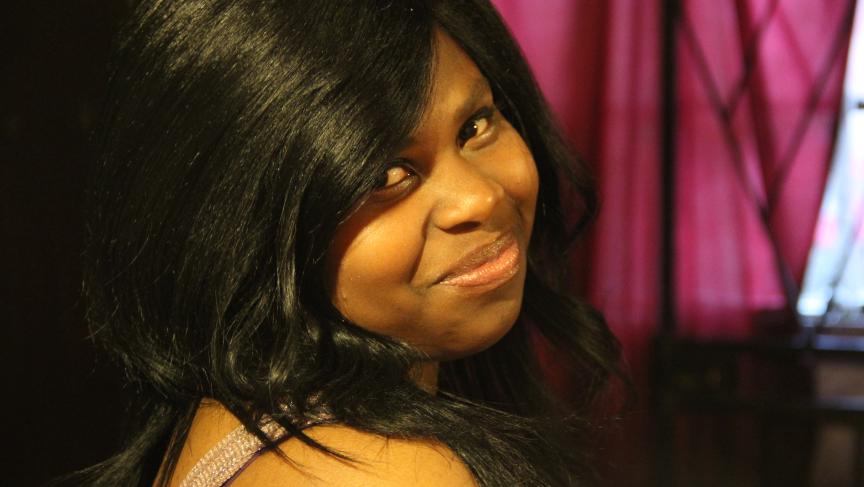 Tandie Nkosi, a senior at the Centre of Science and Technology (COSAT), is ready to go to her prom.

In Cape Town, where the school year is nearing its end, a high school that serves impoverished students recently held its senior prom. For 18-year-old Tandie, attending the dance required eight months of planning. 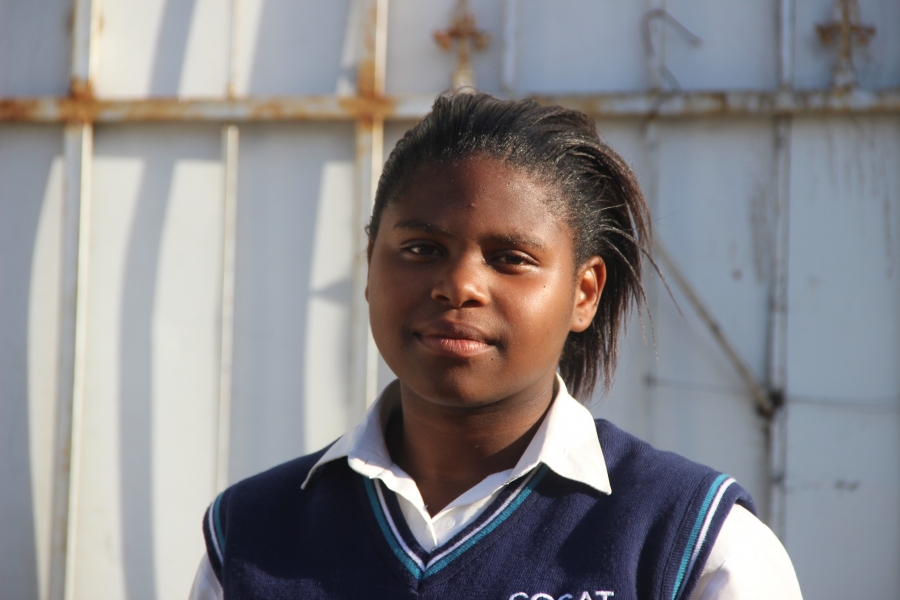 Tandie Nkosi and her family live in a shack in the townships on the outskirts of Cape Town, South Africa.

I met Tandie at her home a few days before the prom. She wanted to show me her dress. She pulled it out of a closet and ran her hands over the fabric. It was beautiful — long and silver, with a purplish hue. It glittered.

There was a striking contrast between Tandie’s dress and her home — a rusty, three-room shack. Rotting cardboard lined the walls, and the windows had no glass — just bed sheets stretched across the openings.

Tandie’s mother makes just 200 dollars a month, and she is raising three kids. So back in January, at the beginning of the South African school year, it wasn’t clear if Tandie would be able to afford the 30-dollar ticket for prom, or the cost of a dress, shoes, and jewelry.

But Tandie was determined to go, and she came up with a plan. She started selling candy at school. This violated school policy. “I guess I kind of took a risk, but a really positive risk if you think about it,” she said, laughing.

Tandie made just ten cents per piece of chocolate contraband, but over several months that added up to 30 dollars. Meanwhile, her mother and aunt scraped together another $60. A teacher at school also helped out by buying Tandie a pair of shoes. That meant she had everything she needed for prom.

The day before prom, Tandie went to a hair salon. She shifted in her chair, in front of a mirror coated with a thin film of hair spray. She was getting a weave — a shoulder-length hairpiece — for the first time. 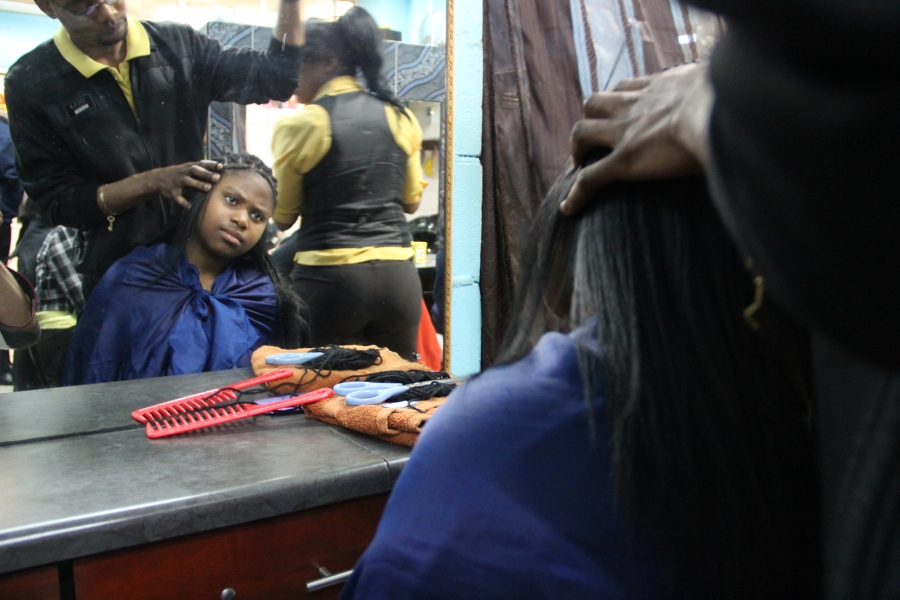 Tandie visits a hair salon in a local mall.

“[I’m feeling] nervous, kind of frightened,” she said. “Because if the style doesn’t suit me, there are no refunds.”

As Tandie described all the time and money she had invested in going to the prom, I couldn’t help but wonder — why did it matter so much to her?

Tandie said that she wanted to feel glamorous, at least for a night.

There was also peer pressure from her friends.

And, she said the prom was a chance to celebrate a big accomplishment. In a few months, she will be the first in her family to finish high school.

On the day of the prom, I met Tandie back at her house. Rain was dripping through the tin roof.

Tandie put on her gown and five-inch heels. Her hair fell to her shoulders, and she wore a matching silver bracelet and necklace. Her mom stepped back to look at her.

Tandie grabbed an umbrella, changed into sneakers, and stepped out onto the muddy roads that surround her shack. She got into a friend’s car and headed to school. (Tandie is a student at the Centre of Science and Technology — COSAT.)

Outside the school’s entrance, a huge group had gathered. There were students from several high schools, and members of the community. As the COSAT seniors arrived, one by one, the crowd screamed wildly. It felt like a celebrity fashion show. 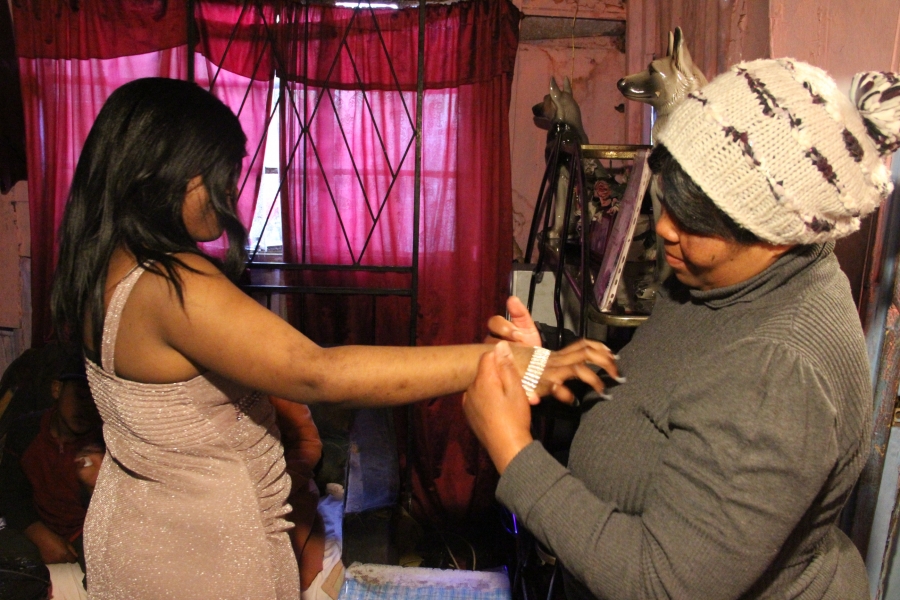 Tandie’s mother helps her put on a bracelet.

Tandie’s car pulled up. She opened the car door and stepped onto the sidewalk — her red carpet for the night. There were oohs and aahs. Her classmates were clearly impressed.

Other seniors were not so fortunate. A girl in a blue dress walked by, and the crowd went silent. I asked a group of eleventh grade girls why.

“That dress looks cheap,” said one. “Compared to the ones we’ve seen before, [the dress is] just not doing it,” said another.

Clearly, looking good — and wealthy — was important, even in this very poor community.

Tandie and the other seniors piled into a set of vans. They headed to a French restaurant in the heart of Cape Town — the setting for prom.

The evening was more or less what you’d expect. There was a nice dinner — prawns and lamb shanks. There were toasts. And there was plenty of dancing. At one point, the students and teachers all did the Electric Slide to an African pop song.

At the end of the night, I caught up with Tandie at her dinner table. She had a huge smile. I asked how her night had gone.

“It was wonderful, great, fantastic, epic, awesome,” she said. “I guess you get the picture.”

Tandie said she felt like a grown-up. And it became clear to me why she had invested so much money and emotion in this one night. Dancing with her teachers, eating fancy food, and looking glamorous — she said this was what she wanted her future to be.

Tandie took one last look at herself in the mirror. Then, along with her classmates, she boarded a van. She headed home to her leaky, tin-roofed shack.

The World is hosting a Facebook chat with COSAT senior Tandie Nkosi and junior Sivenathi Juqu. Ask them about their experiences at school or growing up in the low-income township in South Africa by joining the chat below.