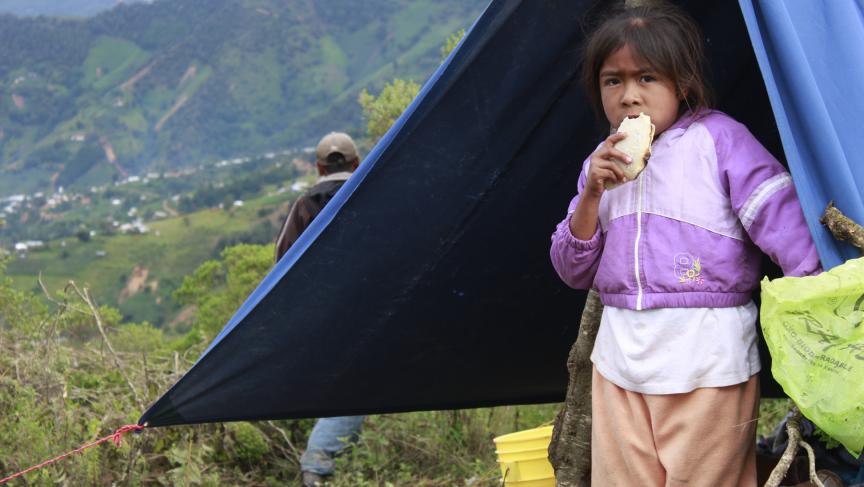 This camp was created after indigenous people were displaced by storms in La Montaña.

One of the hardest hit areas is La Montaña, a region in the southern state of Guerrero — considered one of the poorest and most marginalized areas in the country.

The Tlachinollan Human Rights Center, which is based in La Montaña, described the situation as "bleak" in an article in El Sur [es]:

"In La Montaña, that forgotten region made up of 19 municipalities and more than 650 indigenous communities, the outlook is bleak. When the rains started, no one imaged the destruction they would leave in their wake. There was not a single warning about what was coming in order to take precautions," the group wrote. "The rain simply started and lasted as if endless, with a devastating fury that had never been seen before."

The death toll in La Montaña is now more than 30, but still is considered preliminary because the collapse of roads and paths have kept remote communities isolated and unable to communicate.

The government has declared [es] all 19 La Montaña municipalities a natural disaster zone.

The Tlachinollan Human Rights Center also denounced what they called authorities’ slow response, which they say “reveals the discriminative face of the Mexican State”:

"No high-level authority of the federal and state governments came to La Montaña during the first days of the disaster. With authorities dedicated to the transfer of Acapulco tourists, the hardship of the indigenous communities of La Montaña was, in light of the facts, relegated to the background," they wrote.

The US NGO Washington Office on Latin America, which gave the The Tlachinollan Human Rights Center a Human Rights Award in 2009, called on Mexican authorities to take action and “respond to the immediate needs of communities in the La Montaña region of Mexico in a coordinated and transparent manner.”

Paris Martínez, writing for the website Animal Político [es], revealed that in the communities of Moyotepec and La Lucerna, two indigenous communities from La Montaña, more than 3,000 people were housed in camps after they lost their homes and crops to the storms.

"And like Moyotepec and La Lucerna, inhabitants of at least 50 indigenous communities of La Montaña remain in camps and shelters where official help has barely trickled in," she wrote.

In his report, Martínez highlighted that by Sept. 22 the inhabitants of Moyotepec had been waiting eight days for help. He says a few hours after reporters began reporting, Army and Ministry of Health doctors, accompanied by trucks with blankets, water purification tablets and groceries arrived in Moyotepec. But he pointed out that the authorities were in such a hurry that they drove by the La Lucerna camp without providing any assistance.

Secretary of Social Development Rosario Robles arrived a day later. Robles said that they'd been “all over the state of Guerrero” and that the alleged lack of attention to indigenous communities has been a problem of media coverage, not a problem related to their work.

In an email sent to Global Voices this week, the Tlachinollan Human Rights Center said indigenous youth are using social networks like Facebook to share information and organize the delivery of humanitarian aid to their communities.

Tlachinollan also reported that according to the governor of Guerrero, Ángel Aguirre Rivero, more than 13,000 people of La Montaña have been displaced. There are currently 49 camps where people are taking refuge after their homes were affected by the rains. Furthermore, 31 communities need to be relocated, and 215 — one third of the indigenous communities of La Montaña — have been isolated and unable to communicate since September 14.

Read more at Global Voices Online, where this article by Silvia Viñas was originally published.