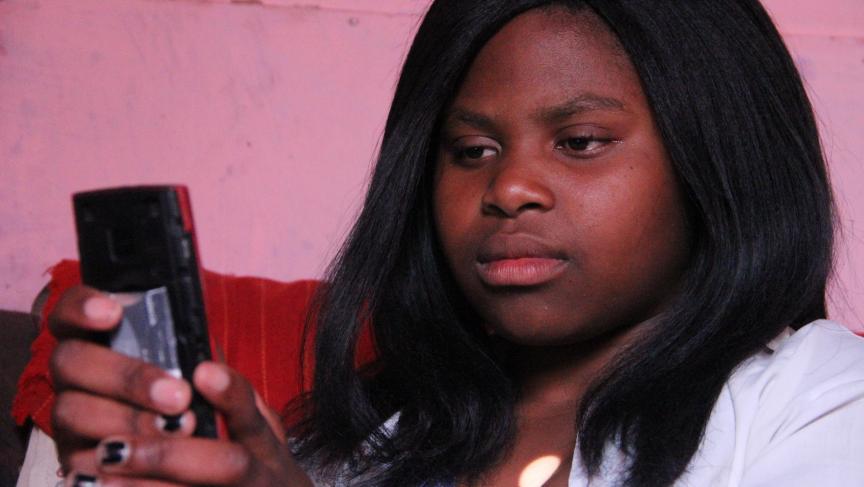 Tandie Nkosi, a senior at COSAT, chats with The World's audience on Facebook via her mobile phone.

Tandie Nkosi is a senior at the Centre of Science and Technology (COSAT) in South Africa. I recently told the story of her getting ready for and attending the prom. This week, Tandie and Sive, another student at COSAT, answered audience questions in a Facebook chat, and I wanted to know what that experience was like.

"The things that some of the listeners said were very inspiring," Tandie said. "They kind of saw a side of me that I've never seen about myself."

One chat participant wrote, "Thank you both for sharing your hopes, dreams, and struggles. Your commendable ambition and determination is truly inspiring."

I asked Tandie about all this positive response to the stories about her that had aired on PRI's The World. "I never considered myself brave, and it made me feel confident," she said.

However, she was surprised about all these people around the world who knew her life story. "I'm not really a Facebook person, so that was weird. It's kind of humbling."

In their Facebook discussion, Tandie and Sive explained what it is like to be educated at COSAT. Sive said that, since the death of his mother, the main income for him and his older brother is government child support of 300 South African Rand (about US$30) per month. Both he and Tandie said that financial hardships make it difficult to continue their education, yet both are determined to do so.

When asked what they would say if they ever had an audience with a world leader, Tandie would ask that "leaders never forget about those kids that are often cast to the side due to their financial status." Students like those at COSAT have "a strong reason to succeed" and "their success is not theirs alone."