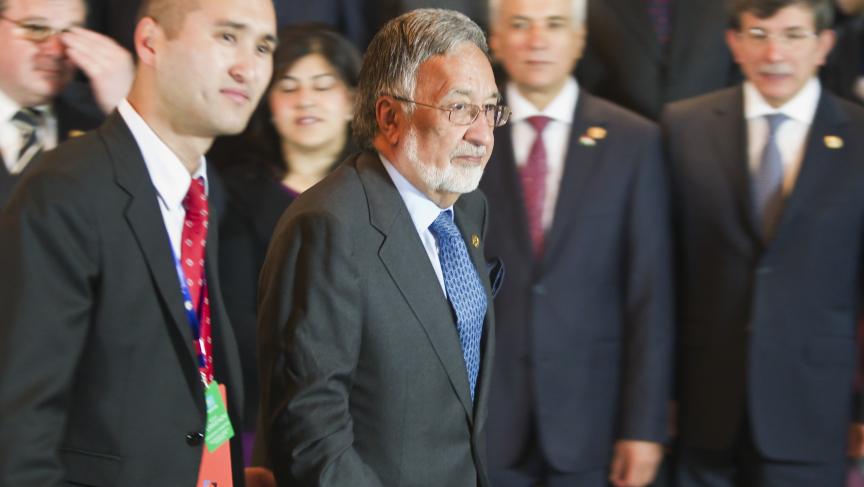 Afghanistan's Foreign Minister Zalmai Rassoul, center, walks past participants of the Ministerial Meeting of the Istanbul Process for Afghanistan in Almaty on April 26, 2013.

During the United Nations General Assembly in New York City, reality can get a little warped.

It's as if all the bright stars and political heavyweights from all over the world coming together in such close proximity distorts time and space.

Zalmai Rassoul, Afghanistan's foreign minister, is among those dignitaries. And he's widely considered a top contender to succeed Hamid Karzai as Afghanistan's next president. Much like in the US, though, when asked if he is, in fact, running, he demurs.

"The deadline for candidacy is the sixth of October. I think by the seventh of October, everyone will know," he said.

The next election will mark the first transition from one democratically-elected president to another in Afghan history.

Rassoul, at the Asia Society in New York earlier in the week, said his country has traveled a hard road in the past 12 years in its war with the Taliban. It is a road many American soldiers have traveled, as well.

And eyeing that history, Rassoul isn't eager to force all American troops out of Afghanistan — something Afghans are debating in Afghanistan and the government is negotiating with the US.

"The reason is to help train and equip Afghan national security forces, but also for the continuation of war against terrorism," he said.

And that argument is hardly straightforward in Afghanistan. For one thing, Rassoul said people are negotiating over just who is considered a terrorist — with a resolution targeted for the end of October.

US forces have typically pushed for a broad definition of terrorism.

"It is a serious negotiation, because the fight against terrorism is not only [a] benefit to Afghanistan, it's a benefit of the world and the United States. The reason the United States came to liberate Afghanistan in 2001 — it was the attack in New York," he said. "We need to have a common definition."

Whoever becomes president, though, will have challenges far beyond the presence of American forces. The country is divided in many ways.

Local "warlords", for example, control swaths of land and people. Their militias are usually drawn from one ethnic group. Yet Rassoul sees ethnic diversity as a point of Afghan pride.

"There's no ethnic problem in Afghanistan. That's something that's portrayed outside Afghanistan" by others, he said.

As for the warlords, he says the more the country advances toward a democratic future, the less sway these local power-brokers will hold.

He points to the rise of women, many of whom gained access to the Internet and social media as children, and young people in general, as the force driving war lords and ethnic divisions eventually into obscurity.

"We're going to build Afghanistan with the youngsters," he said.