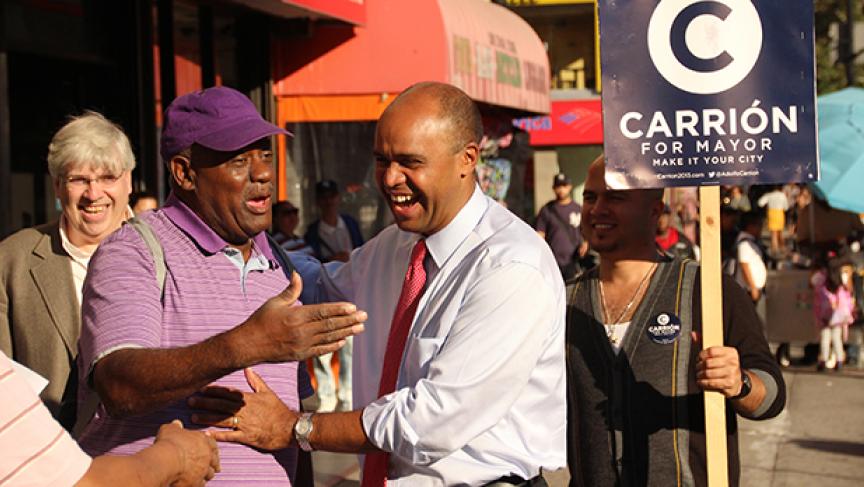 Adolfo Carrión campaigns along 116th Street in “El Barrio” in East Harlem. Carrión, a former Bronx Borough President and member of the Obama administration, is running for New York City mayor on the Independence Party ticket.

New York City’s Latino population has grown to about 30 percent, buoyed by growing populations of Mexicans and Central and South Americans. But the group is plagued by low voter turnout, even by New York City standards.

We know that New York City attracts people from more ethnic backgrounds than nearly any other place in the world. But some groups dominate, and, among Latinos, it’s long been people with roots in Puerto Rico and the Dominican Republic. Now, that’s changing, with an influx of immigrants from Mexico and Central and South America. And this more diverse Latino mix is bringing some changes to the city’s complex politics.

Adolfo Carrión greets people in a mix of Spanish and English as he campaigns along 116 Street in Harlem, a longtime Latino neighborhood also nicknamed El Barrio.

Volunteers holding blue-and-white “Carrión for Mayor” signs trail behind him, as he waves and stops to talk to people. He huddles with one possible voter, telling her in Spanish, “Look, it’d be the first time in the city’s history that we’d have a Hispanic and Puerto Rican mayor.”

Carrión, a former Bronx borough president, says he’s trying to “awaken the sleeping giant” and get fellow Latinos to the polls. Although about 30 percent of New Yorkers are Latino—including half of the Bronx—only about 10 percent of Latinos actually voted in the last mayoral election.

“We have generations locked in poverty, failing schools, people who can’t find work,” he says. “We have folks who haven’t been able acquire job skills that are necessary for the modern marketplace. And we have an electorate that’s staying home.  They have no reason, apparently, to come out and vote.”

“It’s a younger population, and also the poverty rate—the impact of social-economic status on participation. So all of those things come together, and we have dismally low turnout,” says Angelo Falcón President of the National Institute for Latino Policy, who watches trends in Latino voting closely. He lists the typical demographic factors that explain low voter turnout, he adds a new characteristic of New York’s evolving Latino community: many newer Latinos here aren’t citizens.

Puerto Ricans, already US citizens, have long dominated the city’s Latino landscape—and still account for a third of the community. But their share is down sharply from 1990, with Colombians, Ecuadorians, and—especially—Mexicans now accounting for over a quarter of the city’s Latinos. These newer immigrants can lack citizenship and tend to be dispersed throughout the city.

Getting out the vote can be tough, and Adolfo Carrión isn’t having much luck yet. He was once with the Democratic Party but says he ditched it this time around because he thinks the party takes Latinos for granted. He’s now in distant third as the Independence Party candidate.

But, elsewhere in the city, there’s a smaller story about a Latino electoral awakening. In his campaign videos, Carlos Menchaca, 33, is seen announcing his candidacy for New York City Council, saying, "My name is Carlos Menchaca. I’m very proud to be here before you. I was raised by a single mother who came from Mexico to give me a better life.”

He speaks in front of a crowd of supporters, which includes Latinos, Muslims, Asians, African Americans, whites—the diversity of the Brooklyn district he wants to represent.

“There were so many people that were not registered to vote, that were not citizens, but knew citizens, and had family members,” Menchaca tells me. “So we had a stream--a really constant stream throughout the entire campaign where people would come to the campaign office and register their sons and daughters, and cousins. And they would go home to home, so they were doing their own organizing outside of the campaign and bringing people in to get registered.”

Menchaca’s campaign focused on some of the same issues that Carrión’s does: affordable housing and education, and jobs, although the two candidates disagree over keep public safety issues.

And Menchaca wants to put his strength behind the movement to let the city’s non-citizens vote. Carrión has derided that idea.

Menchaca has had several jobs in city government, but isn’t a product of the Democratic machine that fills a lot of elected seats in the city. Joel Magallán, a longtime organizer who campaigned for Menchaca sees him as a new sort of politician, and says he hopes the win will draw more Mexican Americans into politics.

But there are still lingering questions. Whether Menchaca’s momentum will spread, and whether the city’s newer Latinos, for whom immigration reform is a galvanizing issue, will join forces with the city’s older Dominican and Puerto Rican communities.