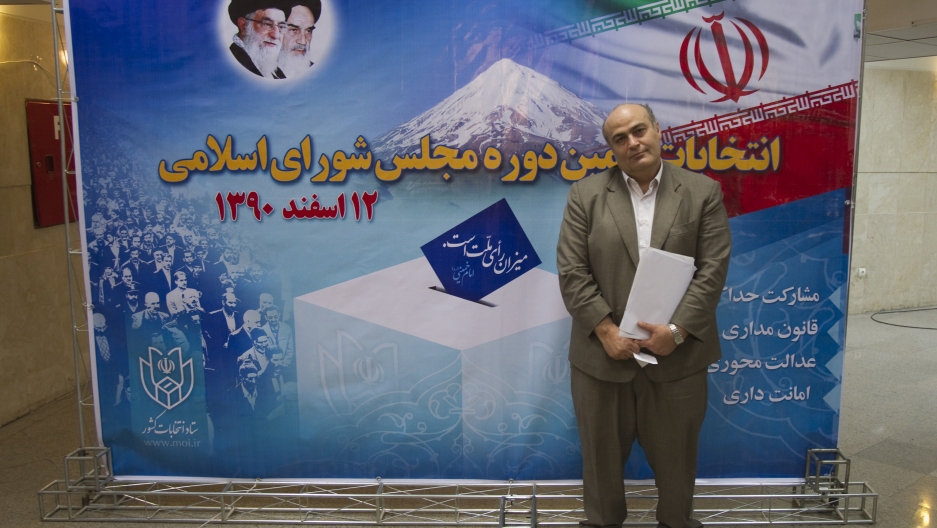 Iranian-Jewish minority Member of Parliament, Siamak Moreh Sedgh, poses for a photograph in front of a banner for the 2012 parliamentary elections.

Iran reserves one seat in its parliament for a representative of its Jewish minority, and has reserved seats for the Christian community and the Zoroastrians. So when Iranian president Hassan Rouhani chose to bring the Jewish parliamentarian, physician Siamak Moreh Sedgh, with him to the UN this week, it was only natural that people would ask why.

"Well, I think after 8 years of Mahmoud Ahmadinejad, 8 acrimonious years under Mahmoud Ahmadinejad," says Reporter Saeed Kamali Dehghan of Britain's Guardian newspaper, "I think Rouhani is trying to revamp the image of Iran on the world stage and show another face of Iran."

In an interview with Christiane Amanpour of CNN on Tuesday night, President Rouhani was asked about his position on the Holocaust. Just as before, he said he is not a historian, and that the topic should be left to them to explore. But he added, "Any crime that happens in history against humanity, including the crime the Nazis committed towards the Jews as well as non-Jews, was reprehensible and condemnable."

The Iranian president said, "Whatever criminality they committed against the Jews, we condemn, because genocide, the taking of the human life, is condemnable and it makes no difference whether that life is a Jewish life, a Christian or a Muslim or what. For us it's the same."

"I personally think he has accepted [the] Holocaust," says journalist Dehghan, which is a dramatic change from the Holocaust denial espoused by former president Ahmadinejad. Dehghan thinks he is sincere, noting that Iran's relationship with the Jewish community goes back millenia. Others wonder if it is just part of Rouhani's PR offensive.