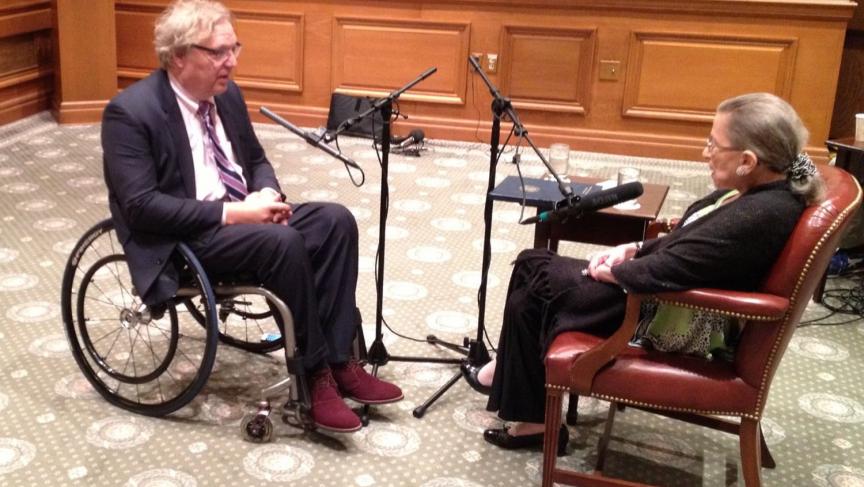 As the second woman to serve on the Supreme Court, Justice Ruth Bader Ginsburg often fields questions about gender and justice.

She's been a crucial vote in challenges to Roe v. Wade,  the 1973 case that legalized abortion in the United States and recognized a right to privacy in the Constitution. But Justice Ginsburg says the landmark decision may have been different if Sandra Day O'Connor, the first woman justice, had been on the court.

She cites the decision she wrote in the 1992 case Planned Parenthood v. Casey.

"The Casey decision had a very different tone. It centered on the woman, not on the doctor-patient relationship, and it isn't divided into trimesters," Ginsburg said. "So I think looking back from that decision we can say yes, if Justice O’Connor had been on (the 1973) Court, maybe she would have influenced the way the decision was explained."

Many of the cases Justice Ginsburg litigated as an attorney for the American Civil Liberties Union in the 1970s related to gender discrimination, an expertise that Ginsburg likely relied upon in writing her dissent in the 2007 case Lilly Ledbetter v. Goodyear Tire Company. The case centered on whether gender discrimination played a role in Ledbetter consistently receiving lower pay than her male counterparts.

Ginsburg famously read her dissent from the bench in that case, a practice she says serves to "alert the public: this is something to be worried about."

Her dissent ended with an invitation to Congress, asking the legislative branch to amend the law so, as she saw it, the court would fully understand that Lilly Ledbetter deserved her back pay in full — an invitation Congress took up in 2009.

Her invitation to Congress, she said, was "quite different" from Chief Justice John Roberts's opinion in Shelby County v. Holder. In the Ledbetter case "it was very easy to fix the law, to make clear that Title VII meant what Lilly Ledbetter said it meant all along. That change, legislative change, was just informing the Court: you got it wrong."

"It’s quite different from the Voting Rights Act," she said. "The Chief’s opinion for the majority was that Congress got it wrong when it renewed the Act and thinking that it could renew it without changing the coverage formula."

Ginsburg draws connections between the workplace pay discrimination Ledbetter faced and the circumstances undocumented workers face on the job.

Undocumented immigrants, Justice Ginsburg notes, "unfortunately are not protected by the law and they are tremendously subjected to exploitation.

"The result is that they would be willing to work for a wage that no person who is welcome in our shores would take. I think the answer to that problem is in Congress’s lap," she said.

Ginsburg said undocumented immigrants who have worked, paid taxes, should have the opportunity go down a path toward citizenship.

"it’s different than the Lilly Ledbetter case," Ginsburg said. "Lilly wasn’t willing to work for less than her male peers; she just didn't know she was being paid less."

Ginsburg has also been a strong proponent of gun control throughout her time on the bench.

In the wake of the fierce, nationwide debate over gun rights and gun control, Justice Ginsburg also explained the historical basis for her view on the Second Amendment.

"The Second Amendment has a preamble about the need for a militia ... Historically, the new government had no money to pay for an army, so they relied on the state militias," she said. "The states required men to have certain weapons and they specified in the law what weapons these people had to keep in their home so that when they were called to do service as militiamen, they would have them. That was the entire purpose of the Second Amendment."

Ginsburg said the disappearance of that purpose eliminates the function of the Second Amednment.

As for the Heller case, decided by the court in 2008, Ginsburg says the court erred in its decision.

"If the court had properly interpreted the Second Amendment, the Court would have said that amendment was very important when the nation was new," she said. "It gave a qualified right to keep and bear arms, but it was for one purpose only — and that was the purpose of having militiamen who were able to fight to preserve the nation."