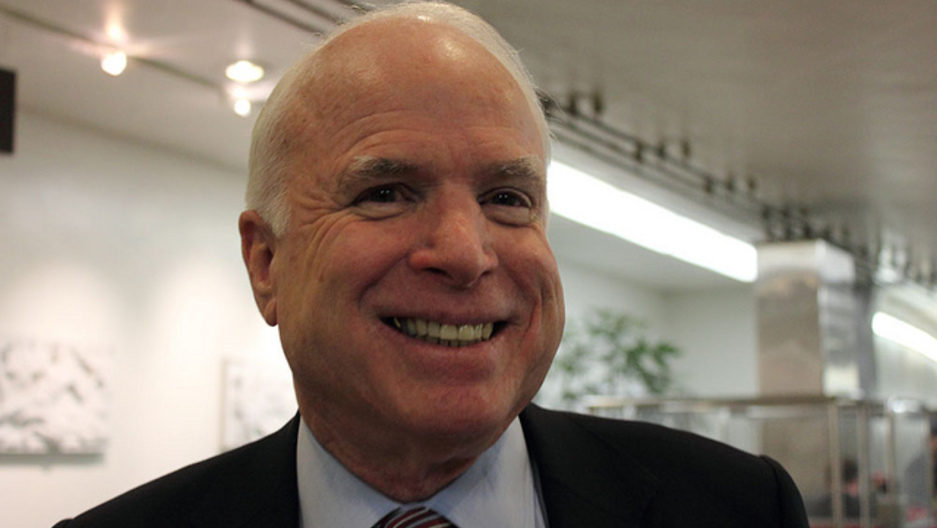 Maybe we could all use a break — a moment out of our day to zone out, stop listening and take a mini vacation — if only in our minds.

That’s what U.S. Senator John McCain (R.-Ariz.) did Tuesday during the three-hour meeting of the Senate Foreign Relations Committee. For a few minutes, he took an electronic vacation to the gambling tables of Atlantic City, courtesy of a video poker game on his smartphone.

His little break didn't go unnoticed — a Washington Post reporter snapped a picture of the senator playing his game and posted it online.

McCain, in turn, made light of it all by tweeting.

Is McCain’s video poker round a sign that he needs a break? Some have suggested that the senator's in-hearing gaming simply meant he was saving his attention for the private meeting with President Barack Obama. McCain acknowledged that long congressional meetings can make dedicated focus difficult to maintain.

"As much as I like to always listen with rapt attention constantly (to) remarks of my colleagues over a three-and-a-half-hour period, occasionally I get a little bored." McCain said to CNN, "But the worst thing about it is I lost thousands of dollars in this game."

Wanting to leave no room for ambiguity, McCain clarified that the dollars were fake.

Some critics were shocked to see the senator diverting attention from something considered as important as a hearing on whether the U.S. will use military force to intervene in the ongoing Syrian civil war. But experts say McCain's "slip-up" is indicative of how deep electronics have seeped into daily life.

"We're intolerant of the boring bits of life," said Sherry Turkle, MIT technology and society specialist. "And there are studies actually, that these little breaks are distracting to the people around us, they're distressing to our children who want our full attention but also when students take these multitasking breaks in class they really bring down the performance of the whole class."

With such high profiles, congresspeople like McCain have the power to set an example for the rest of the country, Turkle said, and gaming during an important hearing could allow other Americans to feel comfortable turning to their phones more often in an increasing number of situations.

Said Turkle: "In a way Senator McCain doing that in something as serious as the Syria hearing, it kind of gives permission for this kind of behavior just as the texting in class that has become a norm that really is breaking down the performance of what's happening in our classrooms."