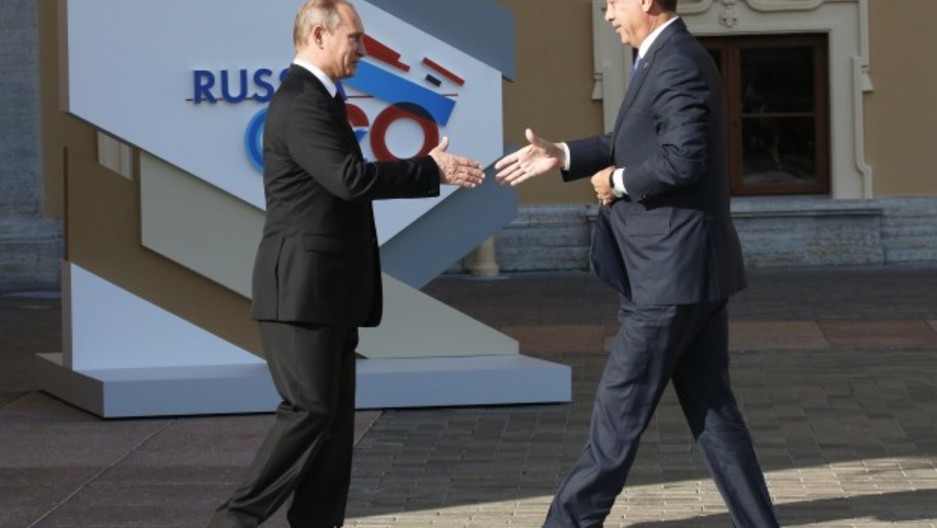 Share
In Turkey, the government has been outspoken in its support of a foreign intervention in Syria. The country currently hosts close to half a million refugees from its southern neighbor, and thousands more pour in through Turkey's borders each week. Turkey's Prime Minister Reccep Tayyip Erdogan has spoken out against Syrian leader Bashar al-Assad from the start of the turmoil in Syria two years ago, and Erdogan says that if there is an intervention, al-Assad must go. But not too long ago, Turkey prided itself on what it called its "zero problems" foreign policy. "It was a distinctly neutral position from which we had our leverage," says Professor Mehmet Ali Tugtan from Istanbul's Bilgi University. Tugtan says Turkey was the one-stop shop for problem solving in the Middle East. "The Israelis were coming to talk to us, the Palestinians were coming to talk to us, the Chechens were coming to talk to us, the Russians were coming to talk to us. But now, we have become a party to the conflicts. We are against Israel, pro-Muslim brotherhood, against Al-Assad, pro-Free Syrian Army and within the Free Syrian Army we are more pro-Sunni elements." Tugtan wonders whether Turkey will ever recover from the course it's taken, at least in the short term. But Professor Howard Eissenstat of St. Lawrence University disagrees. He says that, unlike the US, Turkey is sticking by its principles and supporting the popular uprisings in the Middle East. "They decided they really needed to step forward as a supporter of democracy in the region, that that's their brand in the region, and I think they did that for strategic reasons and because they really believe that." Turkish officials relish the possibility of the US finally getting involved in the Syrian conflict, though Ankara says it's more than willing to take matters into its own hands. Earlier this week, Turkish government spokesman Bulent Arinc said the military is already drawing up plans. "We have a parliamentary mandate for strikes against northern Iraq. We have a mandate for strikes against Syria," he said. "We've studied what we need to do to maintain our country's security." But much like President Obama, Turkish Prime Minister Recep Tayyip Erdogan still has to work on drumming up support at home. Ozge, who didn't provide her last name, says she doesn't buy Erdogan's argument that he wants to get rid of Assad to protect human lives in Syria. "I don't understand why the Prime Minister is so in favor of this war?" she says. "Maybe it's for economic gain but this is against humanity." Ozge is not alone in her aversion to getting involved. Demonstrators who oppose Turkish military intervention in Syria, formed a "human chain" last weekend in honor of World Peace Day. Selen Uzeroglu Kaya was among the protesters. "In Syria, in Egypt, in different parts of the world, no matter their languages, religions or color, people are dying," she says. "And while we can't do much, we are here because we believe our voices can at least be heard with love." The Turkish government still has time to garner support, since the US won't be making any decisions until Congress comes back into session next week.