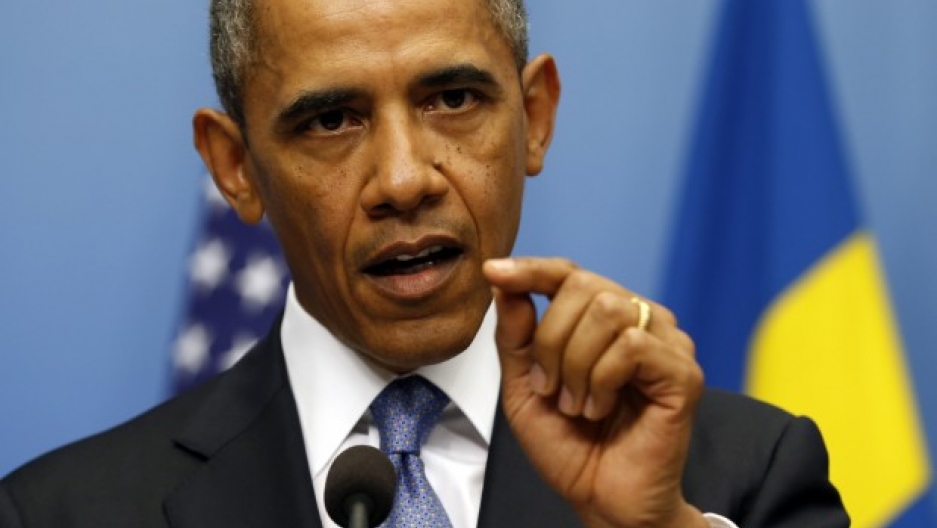 The Obama administration continues to press its case for military action in Syria.

Top administration officials, including Secretary of State John Kerry, were back on Capitol Hill Wednesday, where Kerry told members of the House that now is not the time for “armchair isolationism.”

He said it's time to hold Syria’s government accountable for using chemical weapons to kill its own people.

President Barack Obama also weighed in, during a stopover in Sweden. Obama was on his way to the G-20 summit, which started today in Russia.

Standing at a podium next to the Swedish prime minister, the president gave his most extensive comments yet on the case for attacking Syria. He praised the team of United Nations weapons inspectors — led by a Swede — who just returned from Syria, saying they are doing important work and that there is more to find out about the use of chemical weapons in Syria.

“Keep in mind, I’m somebody who opposed the war in Iraq and am not interested in repeating mistakes of us basing decisions on faulty intelligence,” Obama said. “But having done a thorough-going evaluation of the information that is currently available, I can say with high confidence that chemical weapons were used.”

And they were used, Obama added, by the Assad government.

Repeating some of the same intelligence specifics presented in Congress by Secretary Kerry, Obama said “the (Syrian) opposition doesn’t have the capability to deliver weapons on this scale, these weapons are in Assad’s possession, we have intercepts."

And he said those intercepts show that people in the Syrian government’s chain of command had knowledge of the recent chemical attacks near Damascus that, according to U.S. officials, killed more than 1,400 people, including more than 400 children.

“We can show that the rockets that delivered these chemical weapons went from areas controlled by Assad into these areas where the opposition was lodged, and the accumulation of evidence gives us high confidence that Assad carried this out," Obama said. "The question is, after we’ve gone through all this, are we going to try to find a reason to not act?”

Obama was also asked about his decision over the weekend to seek authorization for the use of military force from the U.S. Congress.

Obama said he’s seeking action in Syria that’s limited in time and scope, with “no boots on the ground.” He said the goal would be to degrade Assad’s capabilities and deter him from using chemical weapons again. He added that the initial U.S. actions would not resolve the underlying problems in Syria’s civil war.

Above all, Obama cast his argument in moral terms. He said what is happening in Syria might not represent an imminent threat to the national security of America. But he said it's a danger to the world. And in no uncertain terms, he called for action.

“At what point do we say, ‘We need to confront actions that are violating our common humanity?’” Obama said.

Obama said the people of Europe certainly understand what happens when the international community fails to act. On the eve of the Jewish New Year, the president visited the Great Synagogue of Stockholm, where he honored Raoul Wallenberg.

Wallenberg is a Swedish diplomat who took action himself during World War II, and by doing so, saved the lives of tens of thousands of Jews from the Nazis.