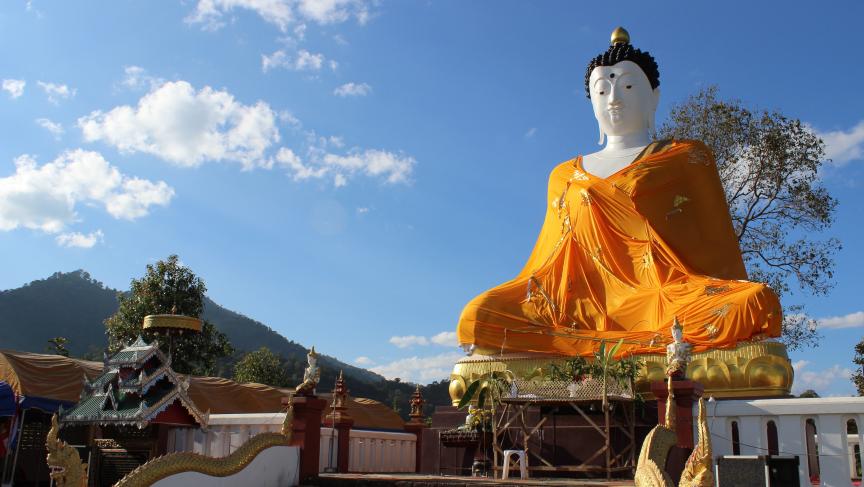 A large Buddha sits at the top a hill in Piang Luang township. Shan New Year's is celebrated on the hillside below it, and the Thailand-Myanmar border is a few hundred yards beyond it. (Photo by Bruce Wallace.)

When Myanmar finally allowed me my first official journalist visa, it was only good for a week. Figuring that 9,000 miles was a long way to go for seven days of reporting, I went on to Thailand once the visa expired.

The situation in Myanmar over the decades has pushed many to leave the country, so you can actually learn a lot about Myanmar by visiting its neighbors.

I’ve been interested in the country’s changing relationship with its ethnic minorities for a while. Finding a way to give the country’s numerous minority groups adequate autonomy has bedeviled Myanmar for decades, and is one of the biggest challenges facing it as it attempts to emerge from 50 years of darkness.

Different ethnic armed groups, representing the Karen, the Kachin and the Mon among many others, have been fighting the central government on and off since the country gained independence from the British in 1947.

The largest ethnic minority group, the Shan, who make up about eight percent of Myanmar’s population, are no exception. Their armies started fighting the Burma government in the '60s, and violence has flared up again recently. The fighting has driven many Shan out of the country, including one million who live in Thailand, where the native Thai are close ethnic relatives.

So I headed for Chiang Mai province in Northern Thailand. It shares a border with Myanmar’s Shan State. I was in the town of Chiang Mai for the start of the Shan New Year celebration on Dec. 14, then took a four-hour ride north over steep, forested mountains to Piang Luang township, a predominately Shan area right by the Thai-Myanmar border.

That’s where the Koung Jor Shan refugee camp is. In 2002, fighting was raging between the Shan State Army (South) and the Myanmar Army. The residents of four Shan State villages were driven across the border into Thailand. They lived in a monastery for a year before settling in a refugee camp built with the assistance of The Border Consortium.

Today about 500 people live in the camp. There are Shan and English-language classes taught in the village; when I was there the English teacher had actually recently arrived from my hometown of Brooklyn, N.Y. There are some efforts to develop cottage industry, and lots of villagers earn a bit of money doing day labor in nearby fields.

It’s a tenuous existence, but no one I talked to was ready to move back across to Myanmar, which is so close that you can see it from the top of a nearby hill.

“I don’t want to go back; I’m so afraid,” 68-year-old Pa Nang said. The memories of fleeing her village 13 years ago, including the smell of dead bodies that surrounded them, are seared in her memory. “When I first arrived here I couldn’t eat for two days."

The Shan New Year celebrations, one hill away from Koung Jor, were in their third and final day when I got there. For some of the refugees it provided a respite from hard lives, and a moment to celebrate a culture that’s a real source of pride among Shan people. Pa Nang’s daughter had gone over, but Pa Nang was staying put.