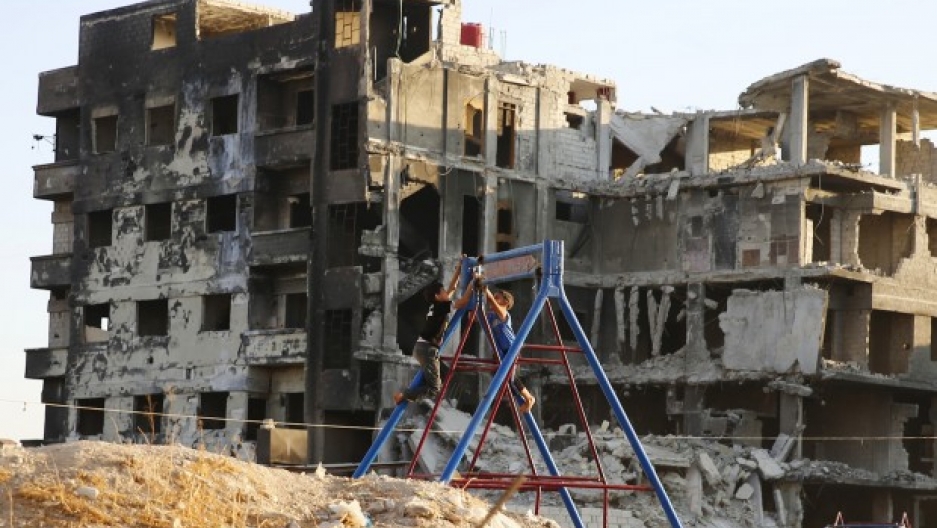 Children play in front of damaged buildings in the Arabeen neigbourhood of Damascus, Syria. (Photo by Mohamed Abdullah/Reuters.)

U.S. and NATO diplomats are currently trying to build a coalition to take action against Syria.

NATO calls the use of chemical weapons, “a clear breach of long-standing international norms and practice.”

Meanwhile, Russia and China are warning the West against what they call “illegal and unwise military aggression.”

So what is the legal case for attacking Syria?

When it comes to chemical weapons, one thing is clear: You’re not allowed to use them. There’s an international treaty banning them.

Only five countries in the world haven’t signed on. One of them, inconveniently, is Syria. What the treaty doesn’t say is what should happen if a nation does use chemical weapons.

There certainly isn’t a provision calling on other countries to take action.

Clare Short, a former British cabinet minister, resigned in protest against the U.K.’s involvement in the Iraq War.

She said there’s no question that Syria should be banned from using chemical weapons, but “we’ve got inspectors there trying to find out what went on, and suddenly we’re going to fling cruise missiles around before the inspectors have been able to report. It’s so reminiscent of what happened in Iraq, and I’m not persuaded that they have the evidence and that this is an honest effort.”

Critics of the U.S. and its allies certainly agree this isn’t an honest effort.

Russia and China are adamant that the only legal way for the U.S. and its allies to attack Syria would be after a resolution in the UN Security Council.

And they’ve already said they’ll veto any such measure.

“The attempts to get around the Security Council and to once again create artificial, unsubstantiated pretexts for armed interference in the region may result in new sufferings in Syria and in catastrophic consequences for other countries of the Middle East and Northern Africa,” Lukashevich said. “We call on our American colleagues and all members of the world community to be sensible, to strictly observe international law and first of all the basic principles of the United Nations Charter.”

While the U.S. may not like it, Lukashevich is right that military action against Syria without UN approval would technically be illegal.

He said one of three conditions must be met for countries to take military action against others: Self-defense; agreement by the U.N. Security Council, or a 2/3′s vote in the UN general assembly.

None of those conditions exist or are likely to exist.

So Scharf said the U.S. will probably use the precedent of Kosovo in 1999.

At the time, NATO countries argued that without military intervention, a Serbian genocide against Kosovo was imminent.

The argument: NATO bombing was unlawful — but legitimate.

“There’s this thing called the ‘responsibility to protect doctrine,’ which was created after the 1999 NATO intervention. And the authors of it were trying to argue that when a country fails to protect its own citizens, or commits grave atrocities against its own citizens, it forfeits the right to argue that its boundaries are sacrosanct. And the other countries in the world have an obligation to move in and protect their citizens,” Scharf said.

If the U.S. and others attack Syria as expected, it may solidify the credibility of the doctrine.

Then again, if things go badly, it could sound the death knell for such an approach.

For analyst Shadi Hamid of the Brookings Doha Centre, the entire argument is almost unbearably cynical.

He said the west abrogated its “responsibility to protect” a long time ago.

“When you listen to western officials in recent days explaining why they decided to take action,” Hamid said, “you heard a lot of moral language. If it was really about shocking the conscience of the world, as John Kerry said, then we would’ve gone in a year and a half ago.”

But Obama laid out his own yardstick last year, when he set the use or transfer of chemical weapons as a red line that Damascus should not cross.

And the allies are citing that as their responsibility to protect.