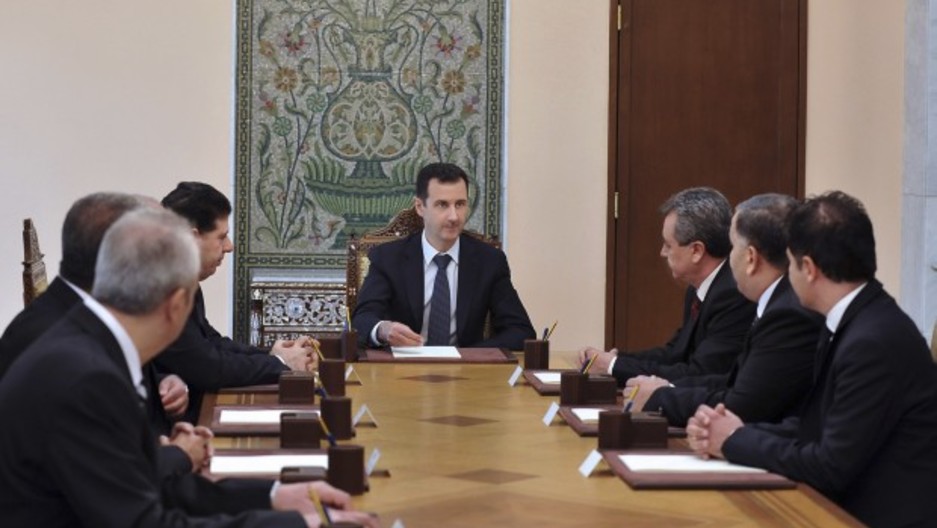 Syria's President Bashar al-Assad (C) heads a meeting with newly appointed ministers in Damascus, in this handout photograph distributed by Syria's national news agency SANA on August 25, 2013. REUTERS/SANA/Handout via Reuters (SYRIA - Tags: POLITICS CONFLICT CIVIL UNREST) ATTENTION EDITORS - THIS IMAGE WAS PROVIDED BY A THIRD PARTY. FOR EDITORIAL USE ONLY. NOT FOR SALE FOR MARKETING OR ADVERTISING CAMPAIGNS. THIS PICTURE IS DISTRIBUTED EXACTLY AS RECEIVED BY REUTERS, AS A SERVICE TO CLIENTS - RTX12VTS

Share
As US officials discussed the possibility of using direct American military force in Syria, president Bashar al-Assad was quoted by Syrian state TV saying that, "Syria will defend itself in the face of any aggression." So, if President Obama decides to bomb Syria, how would Syria respond? Planners at the White House, the Pentagon and Congress might be considering that question very seriously right now. According to one theory, the Syrians would actually not do much in the way of military retaliation. After all, the Israelis have launched more than one air strike on Syrian targets since the start of the civil war and there was no immediate military response from Assad. If the US kept its bombing to a minimum, the line of thinking goes, the Syrian leader might just ride it out. "Assad's retaliatory capacity is quite low," said Michael Singh of the Washington Institute for Near East Policy. "I don't know that, even if he wants to, there's much that he can do." Singh said Assad could try to attack Israel, an important regional ally of the US. But the greater risk, he added, is that limited US cruise missile strikes could provoke a more violent reaction from President Assad against the opposition inside Syria itself. "If we engage in half-measures, sometimes half-measures have a way of emboldening opponents rather than chastising them," Singh said. "[Assad] could take this as a sign that there won't be any more significant reaction from the international community." Singh thinks that much of what Assad could do to deter US intervention, he is already doing. That includes meddling in Lebanon, sponsoring cross-border attacks in Turkey, Jordan and Israel, and brutalizing the Syrian population on a massive scale. One of the broader questions for the Obama administration is how Iran might respond to any American strikes in Syria. Iran is Syria's most important regional ally. And it has repeatedly doubled down on its support for the Assad government throughout the conflict, said Karim Sadjadpour of the Carnegie Endowment for International Peace. He said Iran is not likely to turn its back on Syria as soon as American bombs start falling. But at the same time, Sadjadpour said Tehran might be looking to avoid a more direct confrontation with the United States in Syria. "Hasan Rouhani, the Iranian president, wasn't elected to get into a fight with America," Sadjadpour said. "He was elected to try to improve the Iranian economy, to reduce international sanctions." "I think his priority is to try to reach some kind of nuclear accommodation, which would lesson the pressure against Iran [and] improve the livelihoods of Iranians." The question is, how much influence does Iran's president have over the religious leadership and the Iranian military? The head of Iran's Revolutionary Guard was quoted today saying that US air strikes in Syria would lead to "the immediate destruction of Israel." President Obama has been clear so far. He says US military strikes in Syria would not be aimed at toppling the Assad regime. The primary aim would apparently be to deter Syrian forces from using chemical weapons again. But is that realistic, or even possible? "We can deter [Assad] by showing him that we will kill his people if he uses these weapons, and weaken his regime," said Joshua Landis. He is an expert on Syria at the University of Oklahoma and the author the Syria Comment blog. "But if [Assad] is falling," Landis went on to say. "If he really has his back against the wall, he's going to use whatever he has." Landis said both sides in the Syrian civil war have shown a willingness to stop at almost nothing to win. And the US does not want to be drawn into that kind of conflict, he said. But still, Landis added that it might be worth using American military force to try to prevent Assad's government from using chemical weapons again.