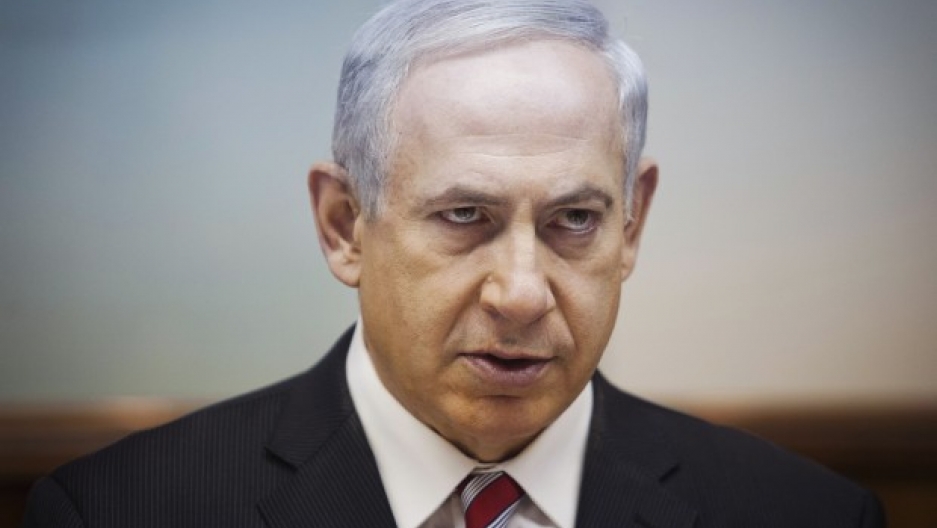 For the past two years, Israeli Prime Minister Benjamin Netanyahu reportedly instructed his ministers not to speak publicly about the civil war taking place on Israel’s northern border.

Israel and Syria are enemies, and Israel has been careful not to take sides, not to get dragged into the fighting. That era of silence is now over.

“The reported use of chemical weapons is terribly disturbing,” said Netanyahu in a video statement posted on his official YouTube channel.

But he warned about an even bigger enemy standing on the sidelines, waiting to see how the world reacts. That enemy, according to Netanyahu, is Iran.

“Syria has become Iran’s testing ground,” he said. “And Iran is closely watching whether and how the world responds to atrocities by Iran’s client state, Syria, and Iran’s proxy, Hezbollah, against innocent civilians in Syria.”

Prominent Israeli cabinet ministers have gone one step further, advocating a U.S.-led response to the chemical attack. Justice Minister Tzipi Livni says a response could discourage future use of chemical weapons. And President Shimon Peres has called on the Arab League to set up a temporary government in Syria in place of Assad.

A former Israeli Air Force commander wrote in an editorial Tuesday that the U.S. shouldn’t try to take out Assad in the short run, leaving a vacuum for a radical Islamist takeover. But toppling Assad should be the long-term goal.

Israeli radio bulletins opened Tuesday morning with assurances from announcers that Israeli officials estimate Syria will not attack Israel in response to an American military strike, despite Syrian threats to the contrary.

At a time when Assad is fighting to remain in power, attacking Israel would be suicidal, officials have been arguing here. And yet, Israel is preparing for the worst. Some Israelis have been lining up to collect gas masks.

The school year began this week, and Israel’s education minister said he’s ready with a plan for long-distance learning in case a Syrian attack forces kids to stay at home.

So if there were even the slightest possibility of a retaliatory attack from Syria, why would Israel encourage the world to attack Syria in the first place? Jacques Neriah, formerly of Israeli military intelligence, says it’s about pre-emption.

“Right now, after Assad used chemical weapons, Israelis understand that it’s different,” Neriah said. “If he is ready to use chemical weapons on his own people, it could only deduct from that that in case of a war with Israel, he would use easily on Israeli concentrations, troops and civilians.”

There’s another reason why Israel might be rooting for intervention. Remember Netanyahu’s comments, framing this as an Iran issue? Israel sees this as a dress rehearsal for an even bigger showdown. Neriah said if the world responds to Syria’s use of nonconventional weapons, there’s a good chance they’ll act to thwart Iranian nonconventional weapons — which Israel sees as an existential threat.

Israeli security officials met in Washington this week with National Security Adviser Susan Rice. The White House said it was a routine meeting. Another meeting of military minds — an emergency one — was held in Jordan. Neriah says one military chief was conspicuously absent.

“(Monday), you had a meeting of all the chiefs of staff concerned. The French, the British, the Germans, the Americans, the Jordanians and the Saudis. And the only one that was not invited was the Israelis.

The Americans don’t want the Israelis to be involved in this issue. Because if Israel is involved, then things could get out of control.”

The two countries have rattled sabers for decades. But there’s been no actual fighting between Syria and Israel since 1973. The U.S. and Israel would like it to stay that way.