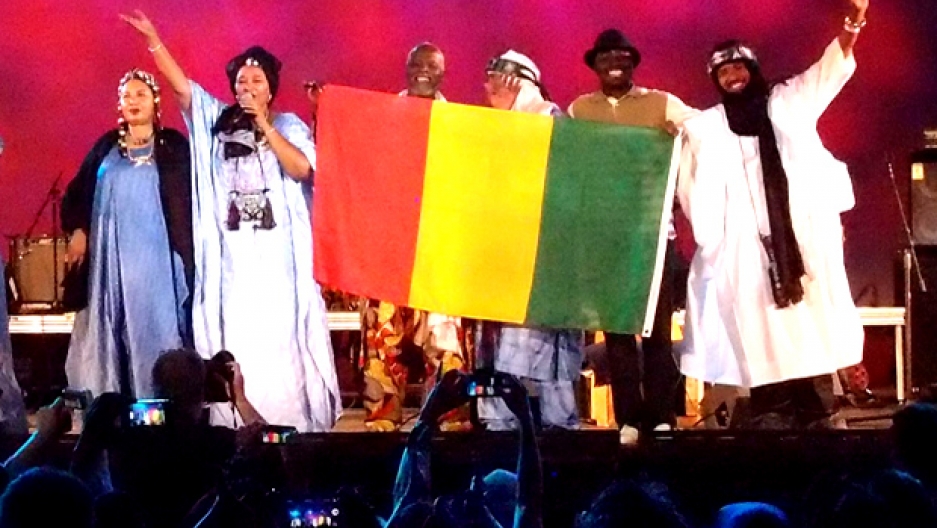 The Caravan for Peace at Lincoln Center (Photo: Mirissa Neff)

Share
Voters in Mali went to the polls Sunday to elect a new president. The election is the first that's been held in Mali since 2007, when incumbent president Amadou Toumani Touré handily won a new term. But last year, Touré was deposed during a military coup and chaos quickly engulfed the country. Radical Islamists gained control of the northern two-thirds of the country, and imposed a violent form of Sharia law. In January, the country teetered on the brink of collapse when it seemed they might try to capture the southern capital, Bamako. Then, France's President Francois Hollande ordered his army to intervene. French forces swiftly regained control of northern cities like Gao and Timbuktu. Though the operation was fraught with colonial undertones, most Malians welcomed the result. But one of the many casualties of Mali's unrest was the celebrated Festival in the Desert. The gathering in the Sahara brings together players from all over Mali's ethnic and musical spectrum, from desert rockers Tinariwen to Bamako superstars Amadou and Mariam. Organizers cancelled this year's festival. But they decided to take the show on the road, and use music as an agent for change. The result is a traveling Caravan for Peace that features regulars, including virtuoso blues guitarist Mamadou Kelly. I caught up with Kelly and the caravan as they pulled into Manhattan for a show at Lincoln Center late last month. When Sharia law was imposed in Kelly's hometown of Goundam, he was forced to flee. "There was no work, no money, there was no way to feed my family, there was nothing," Kelly says. "So we left for Bamako." Like Kelly, many musicians from the north are only starting to return home now. Though uncertainty remains, Kelly emphasized the importance of sending out a diverse group of musical emissaries to highlight the ground that's been gained in Mali. "Our basic message is to signal that there is peace in Mali," he says. "People say that we are divided, but we want to show the entire world that there is peace, that there is no war, and that there is security. That's the reason for our Caravan for Peace." In May, western governments pledged $4 billion in aid to help Mali get back on its feet, and Sunday's elections are a key step to getting the money flowing. Mali still has a long way to go, but Mamadou Kelly seems heartened by the direction the country is taking. "I think things will improve in Mali, because we're going to have a new president. It's going to be better than before." And for one night in the middle of Manhattan, by bringing a cross-section of Malians to play side-by-side, the Caravan for Peace made the prospect of unity in Mali seem possible. Stay tuned for more Caravan For Peace concert dates throughout the US this fall.