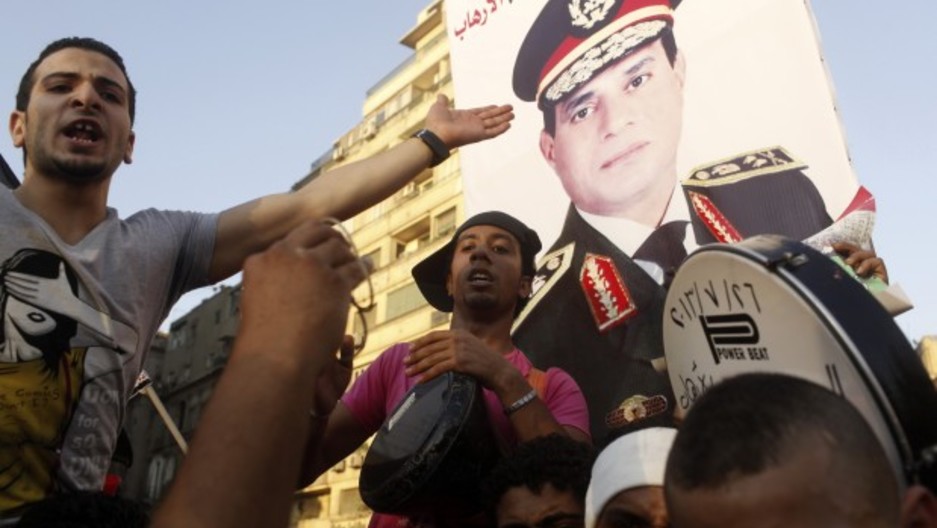 Protesters cheer with drums near a poster of army chief Abdel-Fattah El-Sisi as they gather for a mass protest to support the army in Tahrir square in Cairo July 26, 2013. Ousted Egyptian president Mohamed Mursi is under investigation for an array of charges including murder, the state news agency said on Friday, stoking tensions as opposing political camps took to the streets. Confirming the potential for bloodshed, two men were killed in confrontations in Alexandria and a further 19 were hurt, Mena news agency reported. REUTERS/Asmaa Waguih (EGYPT - Tags: POLITICS CIVIL UNREST) - RTX120E0

Share
The Muslim Brotherhood warned of a possible "massacre" if Egyptian security forces moved to disperse thousands of supporters of the ousted president and Brotherhood leader, Mohammed Morsi. For the last month, protestors in Cairo have been taking part in two large sit-ins, following the overthrow of Morsi on July 3rd by the Egyptian military. Cabinet officials this week ordered the police to put an end to the pro-Morsi protests. But demonstrators are not backing down, despite the fact that dozens of people have died in clashes with police and the armed forces in recent weeks. For many Egyptians, the man of the hour in this time of perpetual crisis is General Abdel Fattah al-Sisi, the head of Egypt's armed forces. They see the general as Egypt's last and greatest hope for returning the country to some semblance of normalcy and recovery, after two-and-a-half years of political stalemate and economic disaster. But who is General Sisi? And, if he remains the most powerful man in Egypt for any length of time, what exactly is his vision for the country? Host Carol Hills talked with Robert Springborg, Professor of National Security Affairs at the Naval Postgraduate School in Monterey, California. Springborg is an expert on the Egyptian military. He took a closer look at Sisi's past and found what he sees as some real cause for concern. Springborg believes that Sisi harbors a radical Islamist vision for Eygpt. The crisis in Egypt clearly puts the White House in a bind. President Obama said the US welcomes big changes in Egypt that push the country toward democracy. But it's hard to square that with the military coup that brought down Egypt's first freely elected president. Here's how Secretary of State John Kerry characterized recent events in Egypt during a television interview today in Islamabad, Pakistan. " …the military did not take over, to the best of our judgment — so far. To run the country, there's a civilian government. In effect, they were restoring democracy." The World's host, Carol Hills also spoke today with Leslie Gelb of the Council on Foreign Relations, about US policy options for Egypt.