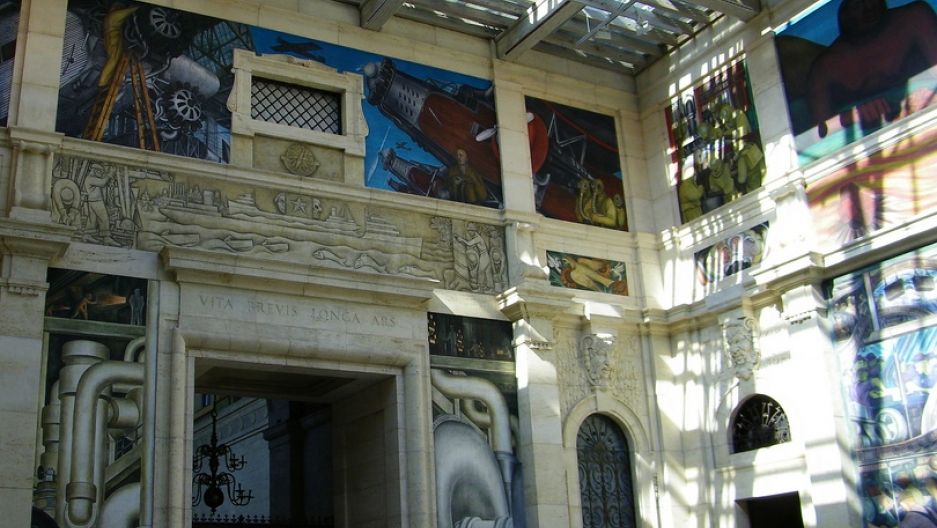 The Detroit Institute of Arts may become an asset in Detroit's record-breaking bankruptcy case. (Photo by Flickr user cseeman.)

Detroit’s filing for Chapter 9 bankruptcy protection is the largest municipal bankruptcy ever.

With the city facing $18 billion in debt and an army of creditors who have been asked to accept pennies on the dollar, the city’s emergency manager, Kevyn Orr, has made it clear that all the city’s assets are on the table. That may include the art collection of the Detroit Institute of Arts, which — uniquely for a major, comprehensive museum in America — belongs to the city, along with the building that houses it.

The Detroit Free Press estimated a group of the museum’s best-known works are worth $2.5 billion.

The possibility of selling the crown jewels of the collection has caused an uproar. Michigan Attorney General Bill Schuette issued an opinion in June, saying the art can't be sold because it is held in the public trust. A committee of the Michigan Senate approved a bill protecting the collection as well.

But the force of these measures is unclear and ultimately may be decided in bankruptcy court.

“The fact is the city of Detroit does not have a lot of assets that can be sold and realized to raise cash to offer these creditors,” said Mark Stryker of the Free Press.

That's why many are worried the DIA’s world-class collection may be cannibalized to appease creditors.

But with Detroit residents waiting 58 minutes, on average, for police to respond to emergency calls, and the city’s retirees facing drastic cuts to their pensions, selling the art collection may be a necessary sacrifice during an impossibly difficult economic time.

“It comes back to this issue of what is a city,” Stryker said. “Is a city just a place that turns on the lights and has a police force and has a water department? Or is a city a collection of cultural assets that form a locus of intellectual activity and creativity and aspiration and inspiration?”

Stryker speculates the sale of even a single painting would critically deter supporters from donating either art or money to the museum in the future.