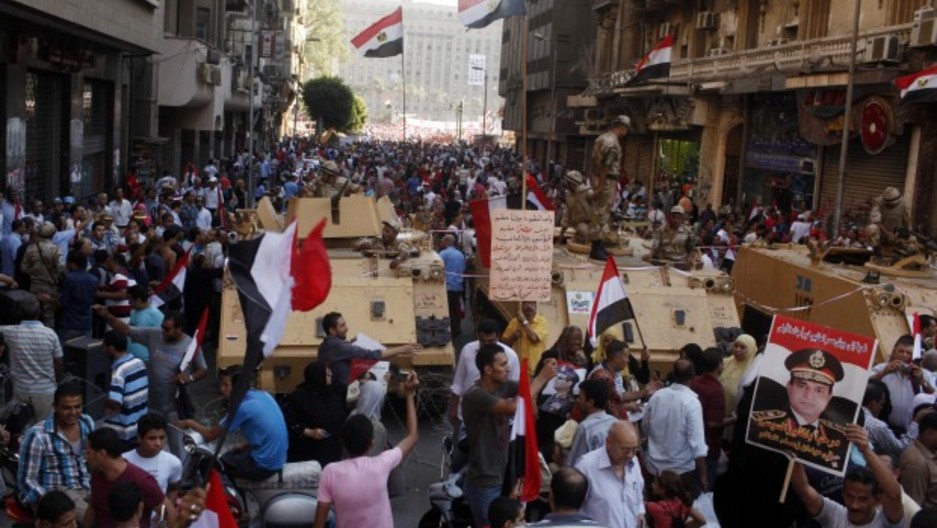 Army soldiers stand guard on a street leading to Tahrir square where protesters gathered for a mass protest to support the army, in Cairo, July 26, 2013. Ousted Egyptian president Mohamed Mursi is under investigation for an array of charges including murder, the state news agency said on Friday, stoking tensions as opposing political camps took to the streets.
REUTERS/Asmaa Waguih (EGYPT - Tags: POLITICS CIVIL UNREST) - RTX1208Z

Share
Let's go back two summers ago. Egypt had recently toppled US-backed dictator Hosni Mubarak. The Arab Spring was in full bloom. The United States gave its most comprehensive response to date with a speech from President Barack Obama. He took the podium at US State Department headquarters in Washington, DC and said the US faced a historic opportunity: We have the chance to show that America values the dignity of the street vendor in Tunisia more than the raw power of the dictator. There must be no doubt that the United States of America welcomes change that advances self-determination and opportunity. Yes, there will be perils that accompany this moment of promise. But after decades of accepting the world as it is in the region, we have a chance to pursue the world as it should be. … it will be the policy of the United States to promote reform across the region, and to support transitions to democracy. That effort begins in Egypt and Tunisia, where the stakes are high -— as Tunisia was at the vanguard of this democratic wave, and Egypt is both a longstanding partner and the Arab world's largest nation. Both nations can set a strong example through free and fair elections, a vibrant civil society, accountable and effective democratic institutions, and responsible regional leadership. The situation in Egypt puts the Obama administration in a tough spot. The White House has apparently decided not to label the overthrow of Egypt's first freely elected president a "coup." Doing so would legally halt the flow of $1.3 billion in US military aid for Egypt. At the same time, any perception that the administration has embraced Egypt's generals — back on center stage in Egyptian politics — would undermine Mr. Obama's own stated goals. For Egypt, the stakes are high indeed. Supporters of the Muslim Brotherhood accuse the US of giving the Egyptian armed forces a green light to depose the democratically elected President Mohammed Morsi. "The Egyptian people understand exactly what's going on," said Mohamed Sudan, spokesman for the Brotherhood's Freedom and Justice Party. "They understand this is counter-revolution." Egypt is returning to back to the dark days of Mubarak's police state and dictatorship, Sudan said. Whatever your thoughts on the Muslim Brotherhood, their democratic credentials and their supporters in the streets of Cairo, they have a point here, according to Joshua Stacher of Kent State University. He's the author of "Adaptable Autocrats." "When the [Egyptian] military shows up to the elected president's office," Stacher said. "[And it] puts him in detention for three weeks without charge, that is a military coup by anybody's definition." And by not calling it a coup outright, Stacher says the Obama administration is betraying American values and flouting US law. "It's a massive mistake. You had millions of people come out onto the streets and demand change, and the US president came out and basically said he was with that." But Stacher said American actions have failed to match the rhetoric. In recent days, the Pentagon has taken some action. It has delayed shipment of four F-16 fighter planes to Egypt. But that move is mostly symbolic, argues Steven Cook of the Council on Foreign Relations and author of "The Struggle for Egypt." "Egypt has 220 F-16s already," Cook said. "At the same [the US] delayed the F-16 delivery, [it] has said the bi-annual military exercise that the United States conducts with the Egyptians …will continue." In other words, it's business as usual where the US-Egyptian alliance has always mattered most for Washington. "The priority is security," explained Cook. "[US] access to Egyptian airspace, access to the Suez Canal, Egyptian logistical help, obviously helping to maintain the Israel-Egypt peace treaty." "Those are all critical national security interests for the United States," said Cook. "They not issues that successive administrations have wanted to rethink in any kind of creative way." The Obama administration appears to be no different. It is returning to the "default setting," Cook said, of choosing stability in Egypt — even if that comes at the expense of trying to nudge the Egyptians toward democracy and rule of law. Complicating matters further, American credibility has also hit rock bottom among supporters of the Egyptian military. Many Egyptians feel that the Obama administration was — at the very least — guilty of sitting on its hands during the Muslim Brotherhood's rise to power last year, or at worst, of tacitly supporting Mohammed Morsi's disastrous presidency.