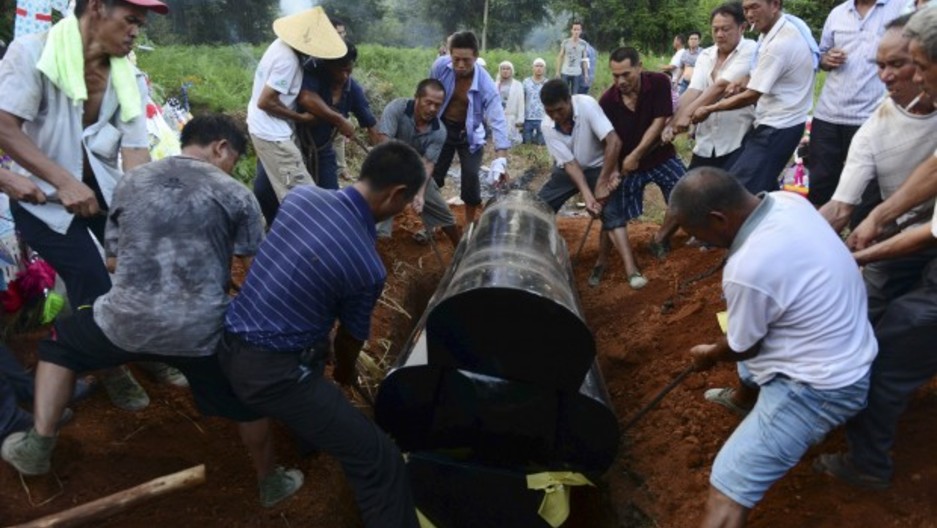 Relatives and villagers place the coffin of 56-year-old farmer Deng Zhengjia into a pit during a funeral in Linwu county, Hunan province July 19, 2013. The body of the watermelon vendor Deng who died in a violent clash with urban management officers in central China's Hunan Province was buried Friday evening after an autopsy. Deng and his wife had a verbal altercation that later turned violent with urban enforcement officers, or chengguan, on Wednesday when they tried to sell home-grown watermelons at a riverside scenic spot where no vendors were allowed, Xinhua News agency reported. Picture taken July 19, 2013. REUTERS/Stringer (CHINA - Tags: CRIME LAW SOCIETY AGRICULTURE) CHINA OUT. NO COMMERCIAL OR EDITORIAL SALES IN CHINA - RTX11SJ2

Share
Last week a Chinese farmer died as he tried to sell his watermelon in Linwu county, Hunan province, China. The farmer, Deng Zhengjia was fined for setting up his stall in an unpermitted location. After moving his stall, urban management officers beat him to death. The incident has created a storm online. Anchor Carol Hills speaks with David Wertime, co-editor of the Chinese blog, Tea Leaf Nation.