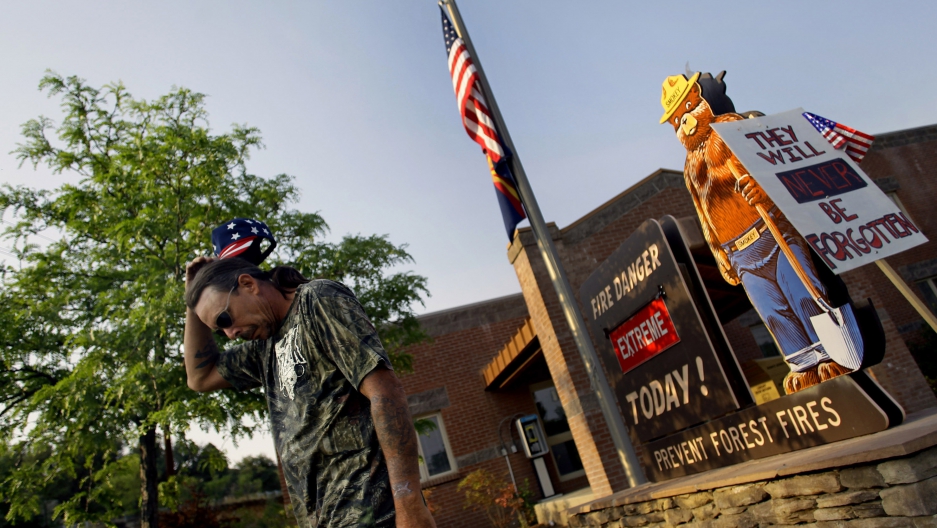 A retired firefighter places a sign outside Fire Station No. 1 in Prescott, Ariz., June 30, 2013. A team of 19 elite firefighters were killed battling a raging wildfire over the weekend. (Photo by Joshua Lott/Reuters.)

Central Arizona residents and officials across the nation are reeling after the largest loss of life due to a wildfire in 30 years.

At least 19 firefighters died this weekend battling a wildfire in the small town of Yarnell, about 80 miles northwest of Phoenix. The blaze began on Friday and spread fast amid high heat, low humidity and strong winds.

Extreme heat has hit several parts of the United States with the southwest reporting near-record temperatures over the weekend.

"Many residents were evacuated from the town of Yarnell and they had been told by firefighters that they had three hours to leave their homes," said Fernanda Santos, a reporter for The New York Times. "All of the sudden, the wind shifted, the flames they were moving away from the town, started coming their way and people started literally screaming on the streets, 'You have to get out! You have to get out!' and they left with what they could."

Left scrambling on short notice, some residents grabbed what they could save from the impending destruction.

"A woman left with her parrot and her cat. The other man left with his prized antique car, and they were just at a restaurant some miles away watching the town burn essentially," Santos said.

Of some 500 homes in Yarnell, about half were expected to be destroyed, reported the Arizona Republic.

Of the fallen firefighters, 18 were elite members of the Granite Mountain Hotshots, specially trained as first responders to deadly fires.

"The interesting thing about Hotshots is that they are the guys who essentially are the front line soldiers on a wildfire. One of their main jobs is to build trenches around the flames to keep the flames from spreading," Santos said. "It's unclear whether the wind turned on them as well and they found themselves trapped in the fire, or whether there was some kind of error in calculating how close they could get to the flames."

In recent weeks, the crew had been fighting fires in New Mexico. They were established in 2002.

“This is as dark a day as I can remember,” Arizona’s governor, Jan Brewer, said in a statement. “When a tragedy like this strikes, all we can do is offer our eternal gratitude to the fallen, and prayers for the families and friends left behind. God bless them all.”

President Barack Obama, in Tanzania on his ongoing tour of Africa, shared condolences on behalf of his family in a statement.

“Michelle and I join all Americans in sending our thoughts and prayers to the families of these brave firefighters and all whose lives have been upended by this terrible tragedy,” he said.