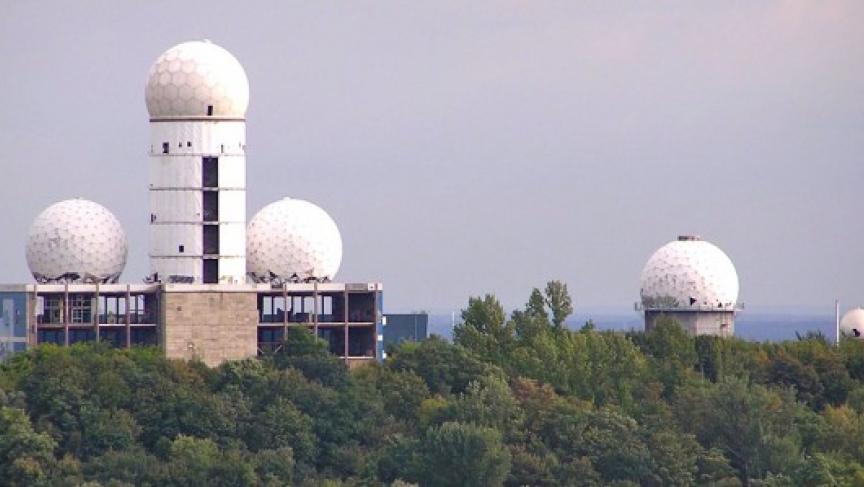 The old U.S. listening station at Teufelsberg, Berlin, which stands to this day, was a key location for American monitoring of Soviet and Warsaw pact communications. (Photo by Axel Mauruszat via Wikimedia Commons.)

It was there, during the Cold War, that the United States and the Soviet Union focused much of their espionage activity.

After World War II, Berlin lay in ruins, its buildings reduced to rubble. The Russians used tons of that rubble, including parts of Hitler’s chancellery, to build a giant war memorial in what would become Soviet East Berlin.

The Americans created a hill out of their rubble. The artificial hill, built on top of a never-completed Nazi military-technical college, was dubbed Teufelsberg, German for “Devil’s Mountain.” At 260 feet, it was hardly a mountain. But it was tall enough for the NSA to point antennas hundreds of miles into East Germany.

Edward Richardson, now a lawyer, served in the 1960s with the 78th Army Security Agency Special Operations Unit at Teufelsberg. Richardson had enlisted, and opted for Russian language training, in hopes of not being sent to Vietnam. It worked. He was assigned to West Berlin in 1965 — to the listening station at Teufelsberg.

There, hidden under giant, slightly menacing-looking domes, antennas picked up all kinds of radio traffic from the east. And 24/7, the Americans used dozens of vacuum tube radios and reel-to-reel tape recorders to monitor it all.

“This was kind of the Pleistocene Era of communications,” Richardson said. “The operators would sit there all night, and just wait for one of lines on the green screen to squiggle, and they’d start the tape recorder. Then they’d hand the tapes over to a transcriber, and then it went on to NSA or ASA headquarters.”

Richardson was tasked with focusing on Soviet troop movements in East Germany.

“We didn’t care what they were saying,” he said. “What we cared about was who was saying it, and where they were saying it from. Nobody was interested in listening to people’s conversations.”

That sounds like an early version of the “We’re only looking at your meta-data” line of jokes, directed these days at the NSA.

Richardson remembers some funny moments, like near daybreak, when weird frequency bounces meant you’d sometimes hear Moscow cabbies chatting. Or when you’d decode a message saying that a Soviet artillery unit was targeting Teufelsberg — only to realize that it was a hoax.

While Richardson worked on the Soviets, Don Cooper listened in on telephone calls between East German government officials.

“Some days it was fun. Other days it was excruciatingly boring,” Cooper said. “They’d be discussing agriculture reports, things like that. They were having a bad crop of potatoes. And if you were on the graveyard shift, or really just after 8 o’clock at night, we just switched over to Radio Luxembourg and listened to rock ‘n’ roll.”

But Cooper says he does remember hearing one interesting conversation. Walter Ulbricht — “Uncle Walter” as he was called — was the East German leader at the time. Cooper once overheard Uncle Walter’s second-in-command, Erich Honecker, arranging a hunting trip.

“Walter wanted to go deer hunting up in the northern part of the country,” Cooper said. “They were making sure he’d get a deer. They drugged the poor thing, and when it staggered out, Walter would take a shot at the thing, and they had a sharpshooter with a silencer on his rifle to make sure the deer went down. So, Walter got his deer.”

And the Americans got a bit of insight into how East Germany worked at the time.

Cooper details this in his book "C-Trick" — named after the shift he worked. He says that officially, the Army Security Agency was never in Berlin. The guys in the outfit couldn’t even wear their unit patch on their uniforms. If a German asked, Cooper says you had to tell them: “I’m a clerk in the Berlin brigade.”

He remembers trying that out one night at a place called The White House Bar.

“I was sitting in there enjoying myself, and a couple of Germans, sitting with a couple of Berliners, and they asked: ‘Are you American?,’" he recalled. "With the military haircut I had at the time, I said: ‘Yeah, I’m a clerk with the Berlin brigade.’ They laughed and said, ‘Oh, you’re ASA.’”

So much for top secret.

There was, of course, plenty of spy-versus-spy goings on in those post-war decades.

The Soviets had built their own listening station on a hill in East Berlin. Christopher McLarren served with the ASA at Teufelsberg in the 1970s.

McLarren ended up marrying a Berliner, and staying on in the city after he left the Army. He watched as the fall of the wall and reunification brought an end to the NSA’s listening station on Teufelsberg.

“Reunification was 1990. From what I understand, the Americans listened in — just to make sure, for another year, just to make sure everything was straight," he recalled. "And then they dismantled the place, so I think operations finished in 1991 or 1992.”

And Teufelsberg itself — the buildings with the strangely shaped domes? It’s fallen into almost complete disrepair.

Artists and musicians love to visit the eery place for inspiration.

Many development ideas have been floated for the site — a hotel, luxury apartments, a spa — but none of them has worked out. The locals aren’t too keen on any of these plans.

Christopher McLarren is part of a group called BerlinSightOut that gives organized tours of the now derelict and dangerous buildings. At a minimum, he says, he’d like to see a small museum built to highlight the history of the place. He says that while Berliners are typically keen to forget the past and move on, they do pause to consider Teufelsberg’s history. About 80 percent of his tour-goers are Berliners.

“It’s very much ‘in’ at this point,” he said. “I always think, when you go through the place — since I knew what it was like before — is in terrible condition, an absolute ruin. But for the people who were never there before, this is all fascinating stuff.”

And no, McLarren says, there hasn’t been an uptick in tour requests since the recent revelations about the NSA’s massive data snooping program.

Instead, he says, it’s just a steady stream of people, coming every weekend despite the notoriously bad Berlin weather, to look out over a now-unified city, and country.