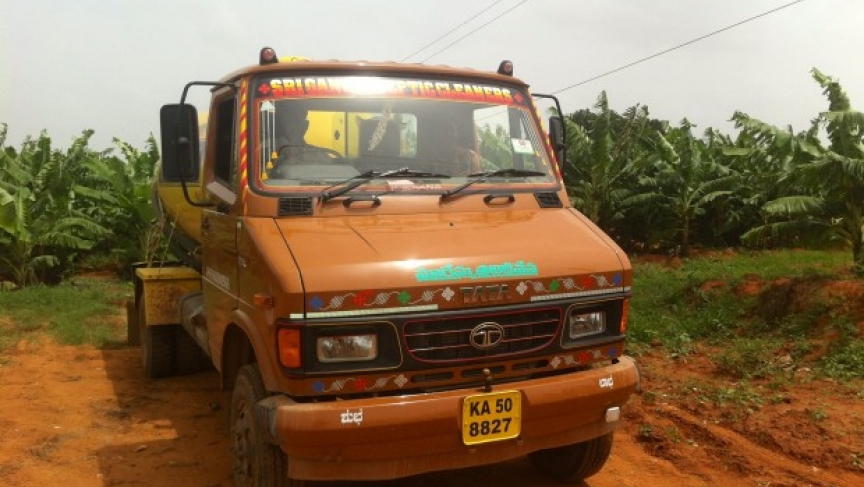 One of a fleet of trucks in the Bangalore area that brings untreated sewage from homes to farms, to be used as fertilizer. The practice is spreading around India and around the world, although there are serious health concerns if it’s not done right.

Synthetic fertilizers have helped fuel a food boom over the last century, but they also contribute mightily to climate change. So now there’s a growing push for a return to the ancient practice of using human waste as fertilizer, but with modern sanitary safeguards. The idea is starting to catch on in India.

Rajanna Uganawadi and his ancestors have been working the soil on the outskirts of Bangalore as long as anyone can remember. Their seven acres are a patchwork of green plots pieced together amid the new apartment complexes sprouting up on farmland around India’s IT capital.

Uganawadi grows papaya, Mexican grass and tomato among other crops. But he says he’s most proud of his bananas. In a normal year, he used to get two crops, but these days, he says, his trees produce three, even four, with no synthetic fertilizers.

“Water from the lavatories and septic tanks,” Uganawadi says.

If you’re eating right now, the idea might kill your appetite, but keep reading. If what’s happening on this farm doesn’t make us sick, it could help solve our climate problem.

Next to Uganawadi’s cement-block house, a yellow tanker truck painted with lotus flowers backs up next to a stand of young banana trees. The stench of toilet water hangs in the air as a young man pops open a spout and a heavy stream of clear liquid and brown sludge sprays from the truck onto the base of the trees. It’s untreated sewage from a large apartment complex nearby.

From Waste to Resource 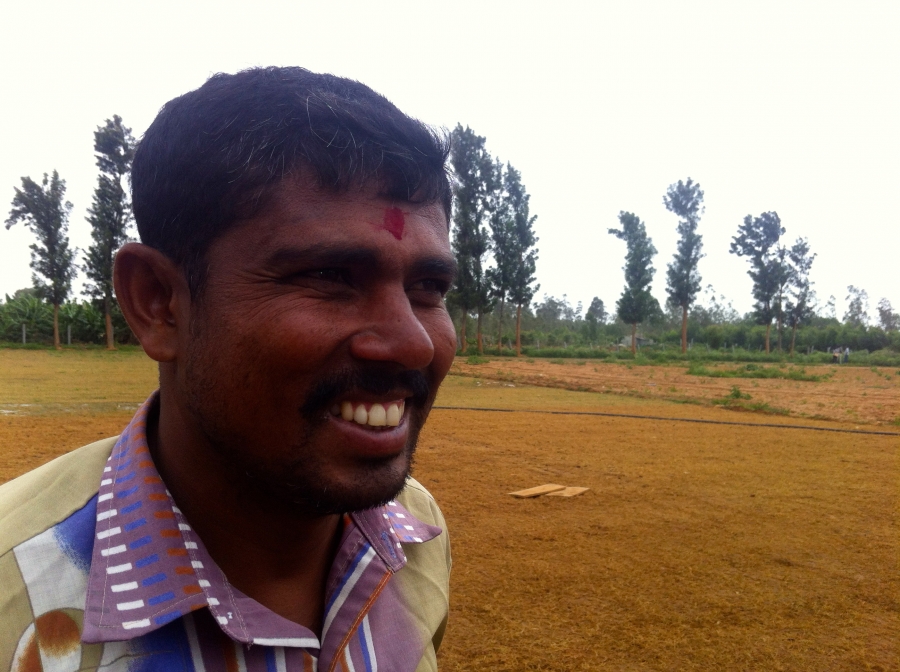 Bangalore farmer Rajanna Uganawadi says by switching from synthetic fertilizers to human waste he’s increased his banana harvests to three or four from two. The practice also avoids significant amounts of greenhouse gases from the manufacture, transportation and application of synthetic fertilizer.

The man repeats this all day – draining out septic tanks and delivering the contents to farmers around Bangalore. It’s an extreme twist on the old adage “one man’s trash is another man’s treasure.”

”So that’s it,” the man says. “I meet the need. Some people want it to be emptied and I take it from them and I give it to those who want it.”

And it’s an important service. About 80 percent of India’s sewage gets no treatment at all. Here in the Bangalore region trucks like this one have been hauling away some of that sewage for about a decade, but until recently, there was no good place to put it.

“They would usually choose an illegal site and dump it,” says Bangalore sanitation engineer S. Vishwanath, an advocate of what’s called “ecological sanitation,” the process of recycling human waste into natural systems.

“This was pretty hazardous.”

But before long, Vishwanath says, “a few farmers came forward to take the sludge and put it on their soil and try an experiment as to what happens to production.”

“Every person is a moving fertilizer unit”

What happened, he says, is that by tweaking the composition of the sludge, the farmers were able to make their production go way up.

That’s because human waste is full of nutrients

“Every person is actually a moving fertilizer unit,” says Prakaash Kumar, a civil engineer who works for European development agencies setting up eco-sanitation programs in India.

Kumar says in a year one person produces the equivalent of about 13 pounds of nitrogen fertilizer as well as a lot of phosphorus. Experts say that’s enough to replace a big chunk of the world’s synthetic fertilizers.

And why would we want to do that? Kumar says it starts with recycling agricultural nutrients, which currently cause big pollution problems, but that there’s also a bigger goal – “the saving of energy.”

It takes lots of electricity and natural gas to make synthetic fertilizer, and the process produces lots of greenhouse gases. In the US, the production and transportation of fertilizer accounts for a third of the energy used for growing crops. Synthetic fertilizers also produce the powerful greenhouse gas nitrous oxide. So replacing them with the nutrients from human waste could be a big benefit for the climate.

It could also save farmers like Rajanna Uganawadi a lot of money. And it’s not like it’s a new idea.

“Excrement has always, since time immemorial, been used for fertilizer purposes,” says Bharat Lal Seth, deputy program manager for the Centre for Science and the Environment, an advocacy group in Delhi.

Seth says people have always recognized the nutrient value of what he calls “excreta.” The Chinese have a long history of recycling their waste. Here in India, everyone seems to have a story of farmers defecating in their own fields, and farmers in Delhi and Gujarat can now buy processed fecal sludge. The trend is even catching on in Europe and America—activists call it “humanure.”

The problem, of course, is safety. Along with all those valuable nutrients are a lot of nasty microbes and parasites that can make people sick and even kill them. That’s the main reason it fell out of favor over the years.

“Makes a lot of sense, but only if it’s done safely.” 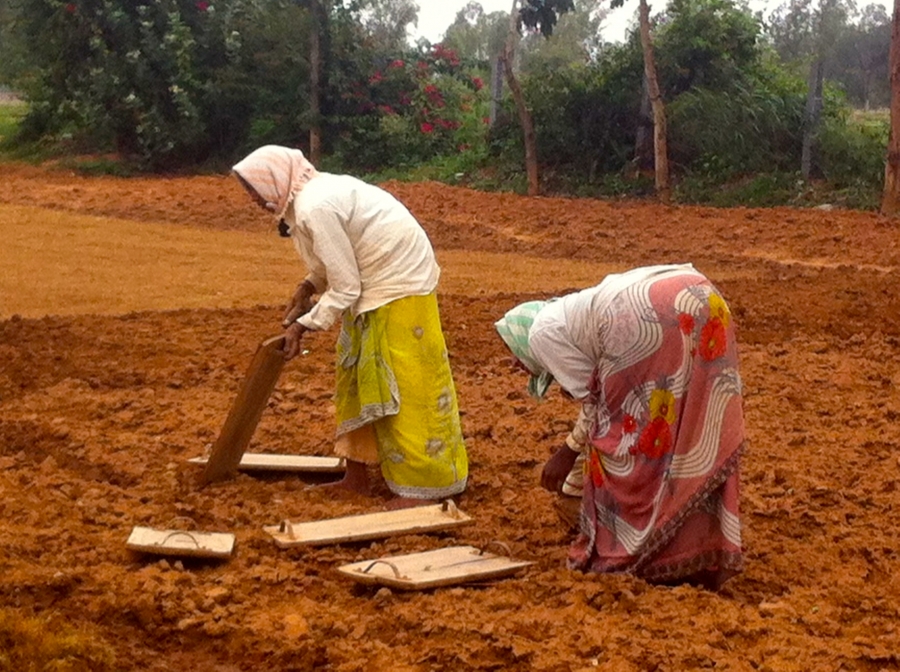 Women on Rajanna Uganawadi’s Bangalore farm plant grass in a field fertilized with human waste, wearing neither gloves nor shoes, as recommended by the UN’s World health Organization. That could put them at risk for serious health problems.

Civil engineer Prakaash Kumar says recycling human waste into fertilizer makes a lot of sense, but only if it’s done safely. And he has his doubts about places like Rajanna Uganawadi’s farm.

He says the sewage should be composted for nine to 12 months to let the pathogens die off.“The way it is being currently done is not safe,” Kumar says.

But on Uganawadi’s farm, they might let it dry for a week before they apply it. And they don’t take other recommended precautions either.

For instance, the World Health Organization recommends using gloves and boots when working with human waste, but at Uganawadi’s farm women in bare feet and bare hands sow new grass in a field covered with a layer of dried sewage.

The women won’t talk about whether they have any health problems from the sewage. Rajanna Uganawadi says they complain about itchy skin, but that’s it. And he dismisses the concerns of experts in their air-conditioned offices.

“The people there, they are not com(ing) out to look at the world,” Uganawadi says. “They are there in their own cocoons. Sitting, working, writing and writing.”

But engineer S. Vishwanath says it shouldn’t take much to bridge the gulf between farmers like Uganawadi on the one hand, who are following their instincts about using recycled sewage, and experts on the other who understand the health risks.

”All you need to do is spread that knowledge more and more of what are safer practices’” Vishwanath says. “And that would be enough in my opinion.”

Not enough, perhaps, to immediately cut the link between fertilizer and climate change, but enough to start changing the way we think of something that Vishwanath says is too good to waste.