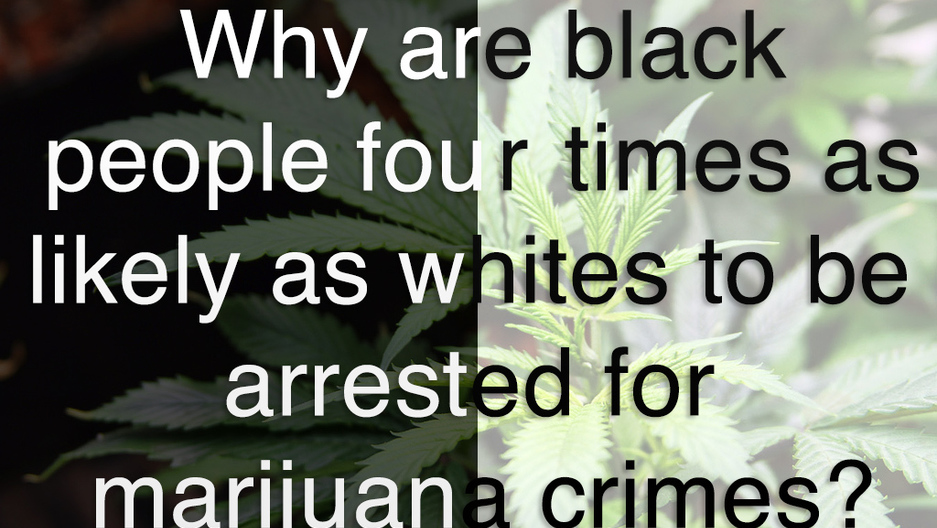 The numbers are hard to explain.

Black Americans are arrested for marijuana-related crimes almost four times as often as whites, according to a recent study titled “The War on Marijuana in Black and White” by the American Civil Liberties Union.

That is a notable number, and in some states it is even higher. In Iowa, Minnesota, Illinois, as well as the District of Columbia, black people are between 7.5 and 8.5 times more likely to be arrested for weed possession.

But why is this happening?

Is it as simple as black people smoking more often? Well no, there’s barely a difference between marijuana-usage among whites and blacks according to the study — whites are actually smoking more.

Other possibilities are more nefarious and difficult to explain, like the obvious:

Are police being racist? The ACLU surely thinks so; they subtitled their report “Billions of Dollars Wasted on Racially Biased Reports.”

But that’s a much more difficult question to answer. For one, many police are minorities themselves. One in four police officers were members of a racial or ethnic minority, according to a 2007 report by the Bureau of Justice Statistics. That number is higher in the urban areas where the majority of drug arrests take place. Take New York City, for example. The Big Apple has the nation’s largest police force at more than 36,000 strong. At the end of 2010, the 53 percent of the city’s police officers were from minority communities.

This is not to suggest that police officers from minority communities are less likely to arrest minority offenders, but to debunk the idea that it’s only white-on-black racism on the street level.

Also, despite the diversity among New York’s rank and file officers, the demographics become whiter the higher an officer’s ranking. In 2010, minorities comprised 38 percent of sergeants, 24 percent of lieutenants, and 17 percent of captains.

Could the reason behind this ugly disparity lie in the tactics of the mostly white command structure of the United States' police force?

From the Voice: "Certainly, there's enforcement value to issuing tickets and stopping people on the street, but the true value of this 'activity,' the tapes indicate, was that it offered proof that the precinct commander and his officers were doing their jobs. With those numbers, the precinct boss could go to police headquarters with ammunition. Low numbers meant criticism and demotion; high numbers meant praise and promotion."

In one sense, police leadership's emphasis on "activity" numbers elevates the police presence — presumably keeping the streets safe — but whether they are doing more harm than good is a point of some contention. The ACLU report implores the public to tell the Justice Department "Don't reward police for making racially-biased wasteful marijuana arrests." They outline the consequences of a marijuana arrest: difficulty obtaining public housing and student financial aid, employment opportunities and child custody determinations.

In addition to the personal costs saddled on individuals caught in the "War on Marijuana", the total cost to enforce marijuana laws in the United States is about $3.6 million.