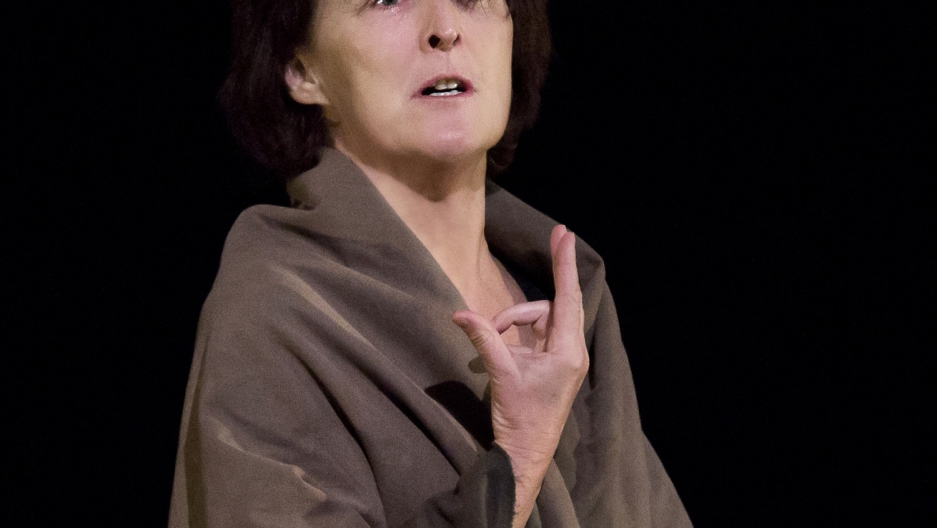 The Irish actress and director Fiona Shaw stars as Mary, the mother of Jesus, in a one-woman show opening this week on Broadway.

The Testament of Mary, which Colm Tóibín based on his own novel, presents not the saintly exemplar of maternal love familiar from religious paintings, but a woman of flesh and blood (and attitude).

“I hope the trick of the play is that you’re meeting someone that you might meet in Brooklyn,” she said.

Shaw is known for portraying larger-than-life women like Euripides’ Medea and Ibsen’s Hedda Gabler. She can play big, but she doesn’t want to mythologize:

“Our job is to take the myth of this great person and discover what is very ordinary,” she said. “Because in the end the theater is about each of us.”

In The Testament of Mary, Tóibín’s Mary is anguished by the horror she’s seen, and spends much of the play trying to figure out how it all went so wrong for her promising boy. But the play is not without humor.

Mary rails against her son’s friends — “his followers,” she says with bitter irony.

"He gathered misfits, men without fathers, men who could not look a woman in the eye. 'Not one of you is normal!'" she said.

Shaw, who grew up Irish Catholic, says there’s no sacrilege in the play, and feels that some religious protests against it have been misguided.

She believes that her own mother, a regular churchgoer, will like it when she comes to New York next month.

“She’s very keen that it doesn’t upset anyone,” Shaw said.