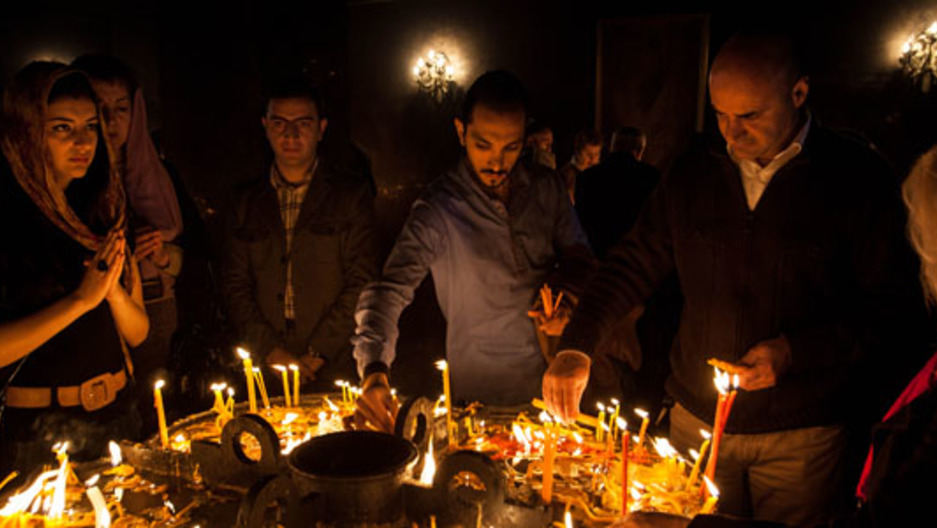 Share
Since the start of the war in Syria, up to 10,000 Syrians of Armenian descent have fled to their ancestors' birthplace. Unlike most Syrian refugees, they are Christians. I spent the Easter holiday with one Syrian-American family who just celebrated their first Easter in the Armenian capital, Yerevan. (They asked me not to use their full names.) On Thursday, the family prepared pastries – Arabic recipes, with an Armenian flare. "We make it every Easter," says the mother, Maral. "It's called Kahke." The mother and her daughter urge me to sample the pebble-shaped cookies stuffed with pistachios and coated in sugar – their favorites. This Syrian-Armenian specialty tastes like home to them; the ingredients came straight from their hometown of Aleppo, Syria. "Every stuff we bought from an Aleppo shop here," Sako says. The father, Sako, tells me that trucks arrive from Aleppo every week to restock the local markets with Syrian goods. He says their car followed one of the food trucks all the way from Syria when the family fled six months ago. They traveled through checkpoints and three international border crossings, reaching Armenia two-and-a-half days later. Sako ran a successful business as a goldsmith in Aleppo. But after two straight months of shelling and shooting, the family had enough. He says he made up his mind to leave within two days. There was just one problem; he wanted to bring his oldest daughter with them, but she was engaged. And she wanted to stay behind with her fiancé. "So I got her married in two days," he says. "I said 'this is your husband. Go. Whatever you want to do, do it.'" His two younger daughters, Talin, 23, and Christina, 14, recall their big sister's bizarre wedding day. "You know, when you go to a wedding, you see the bride, the decorations, and then you go to party? There wasn't anything like that," says Talin. "We just said 'Come on, get married, and we go home safely!' " "The priest was talking," says Christina, "and the church was shaking from tanks in the street." At this point, Sako interrupts her. He wants to make sure I don't get the wrong idea about the tanks; they belong to the Syrian Army. "The tanks protect us," he says. This family fled the same war that's driven more than a million people out of Syria. But while most Syrian refugees blame President Bashar al-Assad for the violence, this Christian family blames the rebels. "I'm afraid if the government loses, Syria will be burn," says Sako. His wife, Maral, chimes in: "We'll be like Iraq." The family sees what happened to Christians in Iraq, and later Egypt, after the fall of authoritarian, but secular regimes in those countries, and they're scared. Sako and Maral support Assad because they see him as a guardian of minority rights. Maral's grandparents fled the Armenian genocide in the Ottoman Empire almost a century ago, and that history of persecution is still vivid for them, she says, adding it's hard to be optimistic with extremist groups gaining ground in Syria. The family does make a distinction between al-Qaeda-backed insurgents and the Free Syrian Army. But they have no love for the opposition. "The [Syrian] Free Army, they don't want Bashar," says Maral, but "ask them who you want, they can't give an answer." On Easter Sunday, Sako attends church in Yerevan with a friend. They meet many other Syrian-Armenians there. Most say they're grateful for the help of Armenia, which is providing school tuition, health care and passports within six months. But they say Syria is still home, and they yearn to go back Sako lights candles after the service. He says they're for his children and for peace. Outside the church, a Syrian-Armenian boy dressed in camouflage plays with his toy: a plastic gun. When I ask why he brought the toy gun to church, his father tells me he's just a kid who loves soldiers.