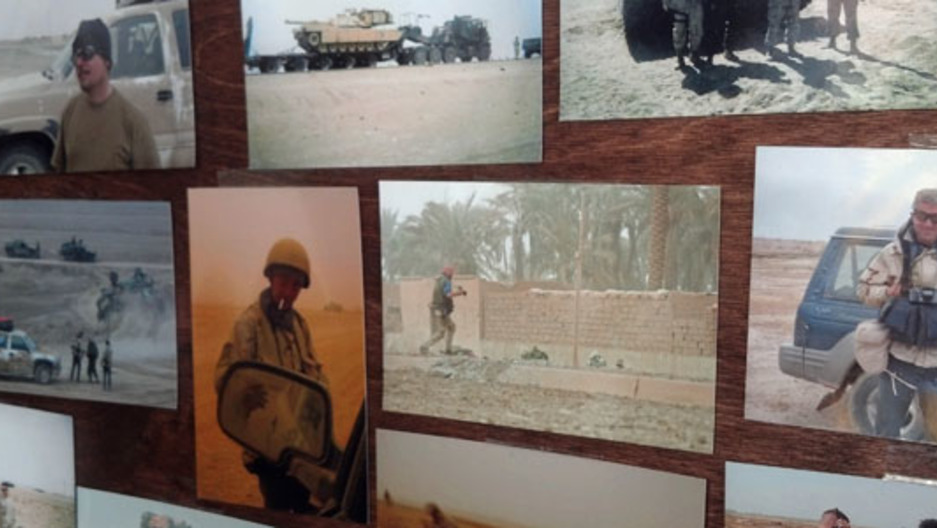 U.S. Marine Lt. Tim McLaughlin took a variety of photos of Iraq and Kuwait during the Iraq invasion in 2003. (Photo by Alex Gallafent.)

Lt. Tim McLaughlin led a Marine tank platoon in 2003 during the invasion of Iraq.

He kept a handwritten diary of those days, which forms the centerpiece of a new exhibition in New York.

“There are two books that I kept," McLaughlin said. “One of them is an operations journal: it’s grid coordinates, it’s ammunition counts, it’s platoon rosters. The other is a diary. Both of them are on very standard Marine Corps-issued green books. If anyone served in the Marine Corps they would recognize *(them) instantly.”

Pages from McLaughlin’s handwritten Iraq War diary are now on display at the Bronx Documentary Center in New York. They’ve been enlarged to poster-size, arranged in a grid across an entire wall.

On the cover of his diary he wrote the phrase: ‘His horse was named death, and hell followed them’.

It's a somewhat manipulated version of a verse from the Bible's Book of Revelations, though McLaughlin couldn't remember if it was from the Bible — or Johnny Cash.

“We’re trained to go to war. And that’s what it is. It’s hell and death and it’s not fancy or romantic. I don’t know where the quote came from though. Much like a lot of this stuff, I don’t remember writing it although I remember the experiences,” he said.

On one page of McLaughlin’s diary there’s a ledger, like something an accountant might write. Except what it’s counting, as illustrated in large, red block letters: KILLS.

There’s boredom too in these pages — daydreams, letters to his girlfriend, and one to Victoria’s Secret. There are poetic summations of daily life atop a tank.

The exhibition was put together by two journalists, the writer Peter Maass, and Gary Knight, a photographer. Both followed McLaughlin’s unit, the 3rd Battalion, 4th Marines, during the invasion. Knight’s images and excerpts of articles by Maass sit alongside the war diary.

For the general public, “these wars start on a certain day, they end on a certain day and that’s it and they’re done. But for the Iraqi civilians, for the guys who fought in the war, and for the small number of people who reported on it, it goes on forever,” Knight said.

Another member of McLaughlin’s platoon showed up on the day the exhibition opened, Gunnery Sgt. Nicholas Popaditch.

“He is probably one of three people who I respect in my life as educators," McLaughlin said. “He’s a Silver (Star) Medal recipient, (had) multiple combat tours, took an RPG in the head, and is now blind. And (he) does extraordinary things for his community in San Diego.”

Popaditch didn’t know McLaughlin was writing a diary while they were in Iraq.

“I like to think I probably have a pretty good idea of what’s on all these pages here," he said.

Their meeting was the first time the platoon sergeant and platoon commander had crossed paths in almost a decade. Popaditch, who wears a black patch over his right eye, can still see a little out of his left. They crouch up close against a wall of photos, snapshots McLaughlin took during their tour together.

They show the tank platoon frozen in time.

McLaughlin is now a lawyer in Boston and Popaditch has twice run for Congress. Like Maass and Knight, their personal experiences of the invasion of Iraq in 2003 are private and unknowable.

But through this diary — its words and its images — you feel like you get pretty close.