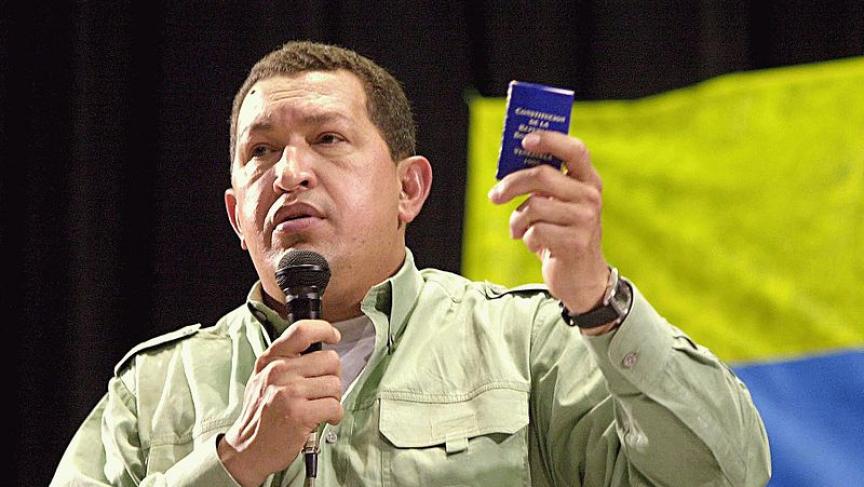 Chávez holds a miniature copy of the 1999 Venezuelan Constitution at the 2005 World Social Forum held in Brazil. (Photo by Victor Soares/Agência Brasil via Wikimedia Commons.)

Chávez, 58, had been battling cancer for months and was seldom seen in public in recent times. He was said to be receiving treatment in Cuba. The Venezuelan strong man was a thorn in the side of U.S. policymakers ever since taking power some 14 years ago.

Now, as The New York Times reports, Chávez's followers face a divided country that is "in the grip of a deepening political crisis that grew more acute as he languished for weeks, silent and out of sight in hospitals in Havana and Caracas.

In the near-term, Vice President Nicolas Maduro will take power. Chávez and Maduro won re-election and were sworn in for another term earlier this year, despite Chávez not actually showing up to the swearing in ceremony.

"We must unite now more than ever," he said, according to CNN.

Thousands of Venezuelan supports of Chávez took to the streets of the country after Tuesday's announcement, weeping openly in mourning over the president's death.

The announcement of Chávez's death and Maduro taking power comes just hours after Maduro, perhaps looking to show his toughness and unite his country against an external threat, evicted two U.S. diplomats, accusing them of plotting against his country.

Maduro also suggested that the United States might itself be responsible for infecting Chávez with cancer, something Chávez himself suggested back in 2011.

According to the country's constitution, a new election will be held within 30 days, likely to be a rematch of October's election, with Maduro, who Chávez anointed his political successor, against Henrique Capriles Radonski, a young governor who lost to Chávez in October. Capriles lost by 11 points, but has proven a powerful challenge to Chávez's hand-picked candidates.