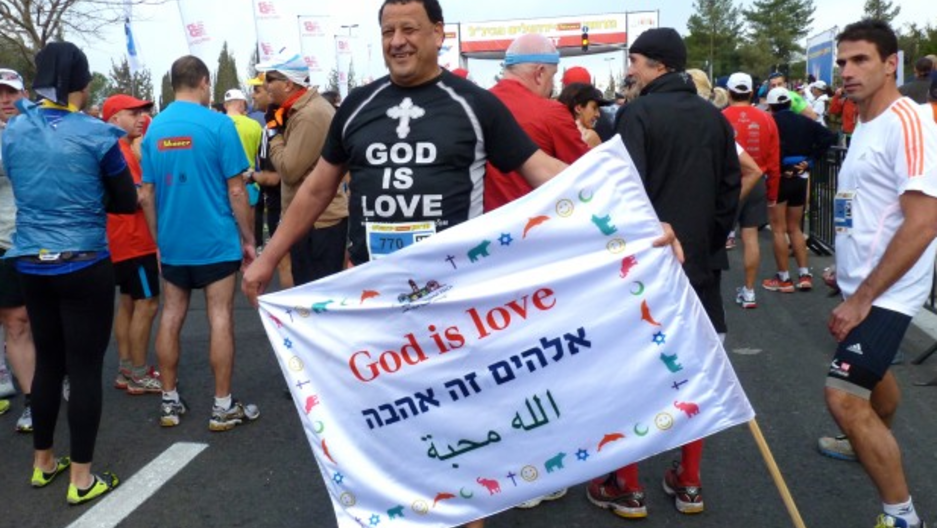 The streets of Jerusalem were closed to traffic Friday morning to make way for some 20,000 runners, taking part in the city’s third annual marathon.

An Ethiopian runner named Abraham Kebeto Ketla was the winner, with a time of just over 2:16. But Palestinian officials declared the event a loser before it even started.

In a statement this week, they warned participants and sponsors to pull out of the race.

“Or else become complicit in covering up Israel’s grave human rights abuses in its occupation of the State of Palestine," they said. "This marathon is part and parcel of other Israeli policies and practices in Jerusalem that are aimed at exerting Israeli control over the occupied city and isolate it from the rest of Palestine.”

One runner who preferred not to be thinking about politics, however, was Raef Guirges, an Egyptian-American accountant from California.

If there’s such a thing as a typical marathoner, Guirges is not it. He’s a slightly overweight 56-year-old who started running in 2005. His family told him to do something about his poor health. Guirges had been smoking heavily for 35 years.

So he went and ran a six-mile race.

Then he did his first marathon. Then another. And he’s still at it.

At a pre-race event Thursday night, Guirges wore his “50 State Marathon Club” shirt. And at one point he started teasing a couple of 20-something Israeli guys who planned to run the half-marathon this year.

“Next year, you promise me, I’m going to see you run with me, OK?” he said. “And when you’re crying, I’ll come and tap on your shoulder and say, ‘don’t worry about it. Let’s cry together.’”

One of the men asked him if he would really cry.

“We’re all going to cry,” Guirges answered. “Especially when you hit mile 18 or 19, you hate yourself. You say, ‘why am I so stupid? Everybody else enjoying their life. I’m the only freakin’ crazy person in the world running. Why?’”

Guirges says he’s not that wild about running in the first place. He doesn’t have much of a training program. And truthfully, he prefers fishing. But he’s a man on a mission. Guirges is a Christian, who says he was moved to be in Jerusalem for the first time.

“I even thought about (running) the entire 26.2 miles barefoot,” he said. “It’s a holy place. I could not believe that I’m walking in Jerusalem wearing my shoes.”

But folks back home talked him out of that idea.

At the starting line, Guirges got a few funny looks. As usual, he had on a black shirt with a big cross on it and the words “God is love.” He carried a big white flag with the same words in English, Hebrew and Arabic. He says it’s a simple message that everyone, from any religion, needs to hear.

The flag situation was a problem at first. In the U.S., Guirges ran his marathons carrying an American flag with the words, “God is love” printed on it.

For Jerusalem, he came up with the idea of carrying three flags stitched together, Israeli, Palestinian and American. Israeli marathon officials nixed that plan. He asked about holding an Israeli flag with “God is love” on it.

In the end, Guirges got some assistance from kindergartners at the Jerusalem YMCA. During a visit to the “Peace Pre-School” there, director Alexandra Klein-Franke asked Guirges if he’d like the kids to help him design a special flag for the marathon.

“Each child suggested something,” Klein-Franke said. “We have dolphins and bears and elephants.”

Guirges wanted to add three religious symbols, a cross, a crescent and a star of David. In the center are the words, “God is love” in English, Hebrew and Arabic.

By taking part in the Jerusalem marathon, Guirges was going against the grain. He grew up in Egypt and remembers learning in school that Israel is the enemy of the Arab world. Egypt’s government, along with Muslim and Christian leaders, still tell Egyptian citizens not to set foot in Israel.

Guirges is also defying the call from Palestinians to boycott the marathon. But he said he doesn’t care much about politics. He just wants to spread his message — even if the running part is difficult for him.

More than three hours after starting the race, some of the YMCA kindergarteners and their teachers were waiting to cheer on Guirges at the half-way point. He was nowhere to be seen as the number of runners passing by dwindled to a trickle. Finally, when someone caught a glimpse of Guirges, his biggest fans in Jerusalem ran out to meet him in the street, have their pictures taken and run alongside him for a couple of blocks.

Guirges said he was tired. And he looked it.

“It is very challenging course,” he said as he huffed and puffed. “No doubt in my mind, this is the hardest marathon that I ever ran.

His strategy seemed to include a lot of walking. And it worked. About six hours after he started, Guirges crossed the finish line, knelt down and kissed the ground.

Thus, he completed his 104th marathon on his fourth different continent. His goal is join the “Seven Continent Club,” and eventually, finish 200 marathons before he calls it quits.