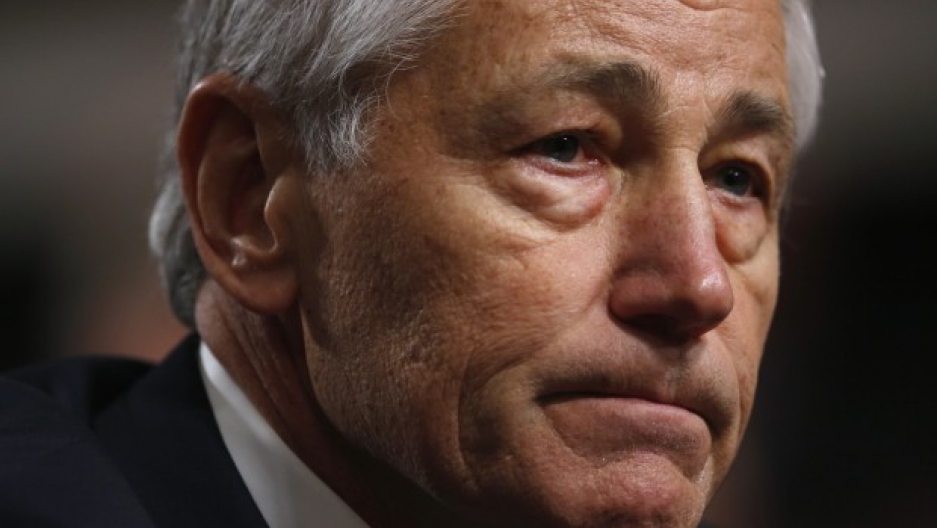 Share
Israel has been a big sticking point in the President Obama's nominee for Defense Secretary, Chuck Hagel. Hagel's taken a lot of heat from his former GOP colleagues in the Senate for his perceived views on Israel. But as The World's Matthew Bell reports, Israelis do not necessarily welcome all the attention from US lawmakers. When Chuck Hagel got a grilling in the Senate earlier this month, the word Israel came up an awful lot, especially from Hagel's former Republican colleagues. They questioned the nominee on his commitment to Israel so relentlessly that the writers at Saturday Night Live were moved to poke some fun. The sketch became rather crude in the end and maybe that's part of the reason it never actually made it to air. Still, a video of the dress rehearsal got plenty of attention online. Blogger Andrew Sullivan, a critic of Israeli government policy toward the Palestinians, posted the video on his website calling it a "cultural breakthrough" for exposing the "absurdly overblown power of the Greater Israel lobby." One factor at play here — in both the comedy sketch and in the US Senate — is something historian Gil Troy, of the Shalom Harman Institute in Jerusalem, calls the "Israel exaggeration factor." "What happens is that somehow when you talk about Israel, people get extreme," Troy said in an interview at his Jerusalem home. "There's an anti-Israel discussion, which is far too hysterical, far too critical, far too harsh. And then there's a pro-Israel discussion in reaction, which is equally hysterical and equally extreme." When members of Congress turn support for Israel into a partisan litmus test, Troy thinks it is not good for Israel, nor is it good for the US. "This is a relationship that does best when it's bi-partisan," Troy said. "It's a relationship that does best when there aren't recriminations going back and forth and people competing [over] who's most 'pro-Israel' and who's 'anti-Israel,'" Troy said. "On the whole most politicians in the United States of America, most Americans are overwhelmingly pro-Israel, and within that, there's a range of debate, because there should be about how do you solve these complicated problems in the Middle East." Some Israelis are uneasy about what Chuck Hagel might bring to US defense policy. Yehiel Michael Leiter is one of them. He's a former chief of staff for Benjamin Netanyahu, who's now serving as Israel's prime minister. Leiter believes Hagel would be too cautious when it comes to confronting national security threats facing the US and its allies. Yet Leiter is also uncomfortable with the Senate's emphasis on Israel. "The issue goes way beyond Israel," Leiter says. "And if senators are putting Israel in the foci of this issue, they're probably making a mistake." Israeli officials have been careful not to say much publicly about the Hagel nomination. And whoever ends up taking over at the Pentagon, Barack Obama will have the opportunity to explain his decision to Israelis in person. He's scheduled to visit the Jewish State next month, for the first time in his presidency.