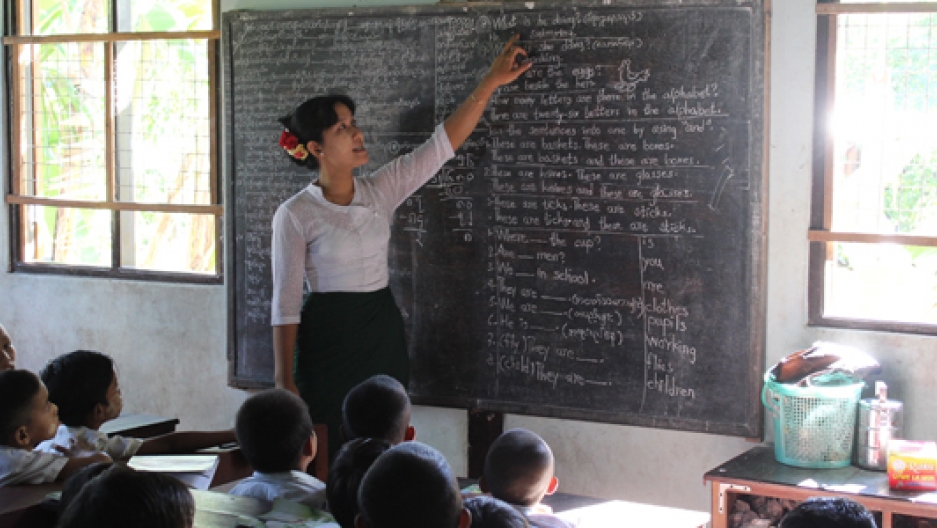 Share
Among the foreign-policy successes President Obama referenced the State of the Union address was Burma. "I saw the power of hope last year in Rangoon, in Burma, when Aung San Suu Kyi welcomed an American president into the home where she had been imprisoned for years," he said. One thing raising hope right now in Burma–the country also known as Myanmar–is a large-scale, across-the-board review of the country's education system. It's called the Comprehensive Education Sector Review, or CESR. The review will probably show what many there already know–there's a lot of work to do. Access is a challenge, teachers don't make enough to live on, and secondary school attendance is low. Whatever changes result, a loose network of schools run by Buddhist monasteries is likely to play a part. We visited one such school recently located near Yangon, Myanmar. The school is in one long room, with wood partitions separating kids by grade, K through four. They begin the school day with a call-and-response chanting—older students lead chants; younger ones respond. The school has an energy, and a cacophony, that's likely familiar to primary-school teachers the world over. But the lessons they're chanting are less familiar. They're Buddhist teachings about character and proper behavior. The school is one of somewhere around 1,500 schools in Myanmar operated by Buddhist monasteries. (Precise education statistics are hard to come by–one thing the CESR is aimed at fixing.) Most are primary schools. And while they take in only a small proportion of the country's students, they play an important role. The monastery schools serve families whose kids wouldn't be educated otherwise–they're too poor to afford the nominal costs of state schools, or they live too far away from the nearest state school. U Khaymarsarya is the monastery's head monk and school principal. He says they had close to 100 students the year their school opened, in 2005, in a school building that still didn't have windows for a floor. "Students sat on plastic carpets, with a whiteboard leaning against the wall," he says through an interpreter, laughing at the memory. "When there was rain coming from one side we'd have to move the board and the children to the other side of the room." The school house has proper windows and blackboards now, and about 200 students. Aside from the Buddhist lessons, it teaches a standard curriculum of Burmese, English, math, and science. Recently, monastic schools have become an officially recognized part of the Myanmar's education system, and students can move from them to state schools. Education is compulsory in Myanmar through 5th grade; school attendance drops off precipitously after that. Somewhere around three quarters of children attend state schools. Because monastic schools don't get state funding, they have to cobble together international, NGO and private sector support. And the teachers have their work cut out for them. Moh Moh San has taught at the school for three years. Through an interpreter, she talks about some of the challenges her students have that the ones in state schools don't. "Their parents work so hard all day," she says. "When they get home they have to take care of meals and everything. They can't give that much support. So I have to be like a parent and also like a teacher." 10-year-old Chit Loon Oo is typical of the students at the school. His father passed away, and his mother is a migrant worker at a factory in Thailand. He lives with his grandmother, who sells food at a roadside stall. After school he goes and helps her. Despite the challenges, there are some ways that monastic schools can have an edge on the state schools. They have more flexibility in their curriculum, and have been early-adopters in Myanmar of the Child-Centered Approach that many school-policy types are keen on. "In many of the monastic schools which have had access to this CCA training, you find that—especially when the classes are small enough—that teachers will become—will actually teach almost better," says Dr. Marie Lall, a specialist in education and South Asian studies at the University of London. "They might not have necessarily the books and the content knowledge, but their teaching methodology might be better than some of the state schools." She says it's hard to predict what will come out of the countrywide school-system review just getting started in Myanmar. "It's very difficult to look into a crystal ball here, but I do think that monastic schools will maintain and probably even increase their importance." Lall says she could imagine more money going to them to expand into secondary education, particularly in remote areas where it would be hard for the government to build new school buildings. Reformers inside Myanmar point to education as being one of the things most in need of fixing. Of course, there's only so much a school can do, particularly one that works with some of the poorest students in a poor country. We asked Chit Loon Oo what his plans are for next school year. He's not going to continue with school, he says. He's going to join his mother in Thailand, and work in the factory with her.