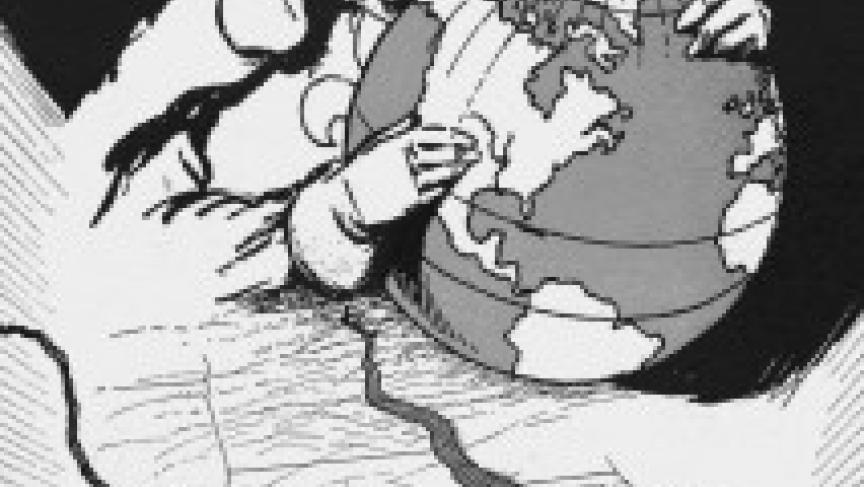 The St. Louis Chamber of Commerce pitched nearby Weldon Spring as a location for the fledgling United Nations. (Image courtesy of the Missouri History Museum.)

As World War II shuddered to a close, the challenge was how to preserve a hard-won peace. A new body, the United Nations, was conceived.

The center of world power had shifted to the United States, so it would meet there.

But where in the U.S.? Before New York got the nod, hundreds of other cities and towns vied for the honor of building a kind of world capital.

In fact, in the mid-1940s, the plan was anywhere but New York City. The Big Apple was too imposing. Too famous. And besides, putting the UN inside another city felt wrong: how could a new center for global diplomacy distinguish itself in the shadow of the world’s most famous skyline?

Anything You Can Do...

Post-war America wasn’t short on confidence. Songs like "Anything You Can Do I Can Do Better" filled the airwaves. And so the idea of a meeting place for all the people of the globe captured people’s imagination.

Why shouldn’t it be built in Conway, N.H? Or Pinehurst, N.C? Or Corpus Christi, Texas? In all, nearly 250 towns, cities and communities across America expressed interest in hosting the United Nations.

Charlene Mires wrote a a new book about the race to host the United Nations, called "Capital of the World."

“Wouldn’t it be most appropriate for the UN to be on an island at Sault Sainte Marie, Mich., where they could be surrounded by peaceful water?” she said.

Towns made their pitches, Mires says.

“Or wouldn’t it be best for the U.N. to be in Tuscahoma, Okla., which had been the capital of the Choctaw Nation as a statement of justice for native peoples?” she said.

The proposals weren’t exactly altruistic. Civic boosters were excited about the jobs and visitors the UN would bring.

Take Rapid City, in the Black Hills of South Dakota. In the 1940s, a local businessman tried to persuade the U.N. to make its home there, a stone’s throw from Mount Rushmore. The pitch included a set of fantastical architectural drawings.

“At its center, a road begins as a spiral and moves outward and outward and outward,” Mires said. “It reminds me of the Wizard of Oz, which would have been fairly current at that time. And the offices were spaced around (the spiral) and they would have put villages for each national delegation out in the hills. They also noted that the World Highway, which was envisioned as going right around the world, would go straight through the middle.”

Boosters could dream big like that. But the small group of international diplomats assigned to find an American home for the U.N.-to-be had to think beyond the fantasies of a world capital.

The west coast was deemed too far from Europe. The midwest had a reputation as being isolationist, and consequently not a good fit. And the south was ruled out over fears that non-white diplomats would feel unwelcome.

So the search committee focussed on America’s north east. And they found a place they really wanted: Greenwich, Conn. Only Greenwich didn’t want them.

The moderator of a key town meeting there was Prescott Bush, the father of one President George Bush and the grandfather of another.

Mires says Bush wasn’t against the idea of the United Nations, but he was against it being located in Greenwich.

“(He argued) this will change the character of our town too much. And furthermore, nobody asked us first,” Mires said.

Greenwich wasn’t the only place to turn the U.N. down. It was embarrassing that the world’s new decision-making body couldn’t decide on a new home.

Soon, only a few serious candidates remained, all of them in or near major cities. Among them were Boston and Philadelphia, which was offering a piece of parkland just outside the center of town. Philadelphia had the infrastructure, the cultural amenities and, as the so-called "cradle of liberty," a pretty good story too.

“Philadelphians were convinced they were going to win” Mires said. “The New York Times carried headlines saying the UN was about to anoint Philadelphia as the capital of the world. What was not known was that in the final days, behind the scenes, the call had gone out to Nelson Rockefeller to help solve the problem and bring the prize home to New York.”

Rockefeller’s dad, John, offered $8.5 million to buy a plot of empty land in Manhattan, overlooking the East River. There were no residents to placate, no obstacles to overcome.

The power brokers in New York were offering the United Nations an easy solution.

There was to be no Oz-like fantasy city for global diplomacy. Instead, there were to be headquarters: somewhere to make deals, not dreams.