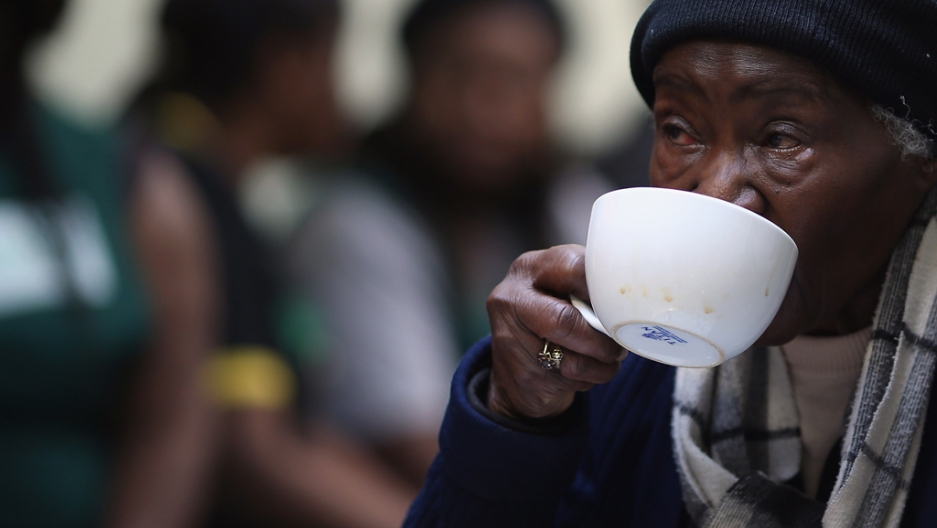 Visitor Louisa Millen enjoys a cup of tea at a Food Bank depot at St. Paul's Church in Brixton on Oct. 23, 2012, in London, England. The need for food banks has increased immensely, with around three depots opening across the UK each week.
Credit: Dan Kitwood
Share

With unemployment at a 16-year high and one in five people living below the poverty line, the number of people using food banks in the United Kingdom has escalated during the recession. But it's not just the less well-off that are in need of help.

Food banks — not unlike Greece's soup kitchens — have rapidly increased in numbers in the last five years. The Trussell Trust, a charity which runs a nationwide network, has seen a surge in its outlets from 20 in 2008 to 307 currently, with three more launching every week.

The system uses free food tickets given out by doctors, social workers, schools and job centers to those in need — estimates show that they will feed 250,000 people in this financial year.

"Rising food and fuel prices and increasing rents combined with static incomes, unemployment and changes to benefits have seen substantial numbers turn to food banks over the last 18 months," Chris Mould, the executive chairman of the Trussell Trust, said in a statement.

Less than 5 percent of food bank clients are homeless, according to its statistics. Many are working families struggling to make ends meet. The two main reasons people were referred to food banks in 2011-12 were delays in benefit entitlements and low income.

At a London-based food bank on a housing estate in Thamesmead, borough-wide director Christine Ridgwell explained that the trust is doing both the UK government and the local authority a huge favor.

"We have a welfare system in this country and it is falling around its uppers. They're in real disarray," she told CNBC.com.

"People are losing money and the government is cutting back. I'm not here to criticize the government because that's not helpful and clearly there are some people that do use the system in a fraudulent way," Ridgwell said. "But there's a huge number of other people that really need that money."

The three outlets in the local borough have exceeded capacity, but there are plans to increase the number of food banks to places like Blackheath — which is usually associated with its upscale housing. Greenwich, home of zero degrees longitude, maritime history and the equine events at the London Olympics, is also set to have an outlet.

"Crisis can happen to everybody," Alan Robinson, a food bank director for Greenwich told CNBC.com. "You find that less well-off people can be more resilient to crisis than people in the more affluent areas."

There are people that have lost their jobs, broken up marriages or simply gotten sick and that can put someone in crisis, Ridgwell explained.

"They have no money to stretch, they have no savings," she said. "So, behind the lovely net curtains and the posh facades ... there will be poverty and it's often more difficult for those people to put their hands up and say: 'help'."

There are fears that more people may need these handouts as a new benefits system called Universal Credit begins. It aims to simplify entitlements as the government tries to reduce its deficit.

"The changes being made to the welfare system, which come into effect in April, threaten to drive more families into poverty. It's no surprise that households will become more reliant on food banks and that we'll see more of these and similar projects," a spokesperson for Greenwich Council told CNBC.com.

Research by Coventry University points out that the Trussell Trust's recent media prominence may have contributed to the charity's popularity. The same document says it's also difficult to determine the exact role played by the recession on the increase in food banks.

"The Government already provides a safety net for essentials like food and housing through the benefits system, and we can provide emergency financial help through crisis loans," a spokesperson for the Department of Work and Pensions told CNBC.com.

"Universal Credit will be gradually rolled out over four years from October 2013 and will directly lift hundreds of thousands of people out of poverty, as well as encourage many to move into work with the knowledge they are better off in work than on benefits."

(Read More: Why the UK jobs number may be misleading)

Claimant levels for those seeking work have doubled compared with pre-crisis levels. This reorganization of benefits is likely to hinder rather than help, according to Ridgwell, and combined with more job losses she expects the number of people relying on food banks to increase.

"Sadly the pendulum has not stopped swinging in the negative," Ridgwell said. "Sadly, I think there will be more."

CNBC: Painting a profit: 10-year boom ahead for art?

CNBC: Ministry source: France has no plan for Peugeot stake