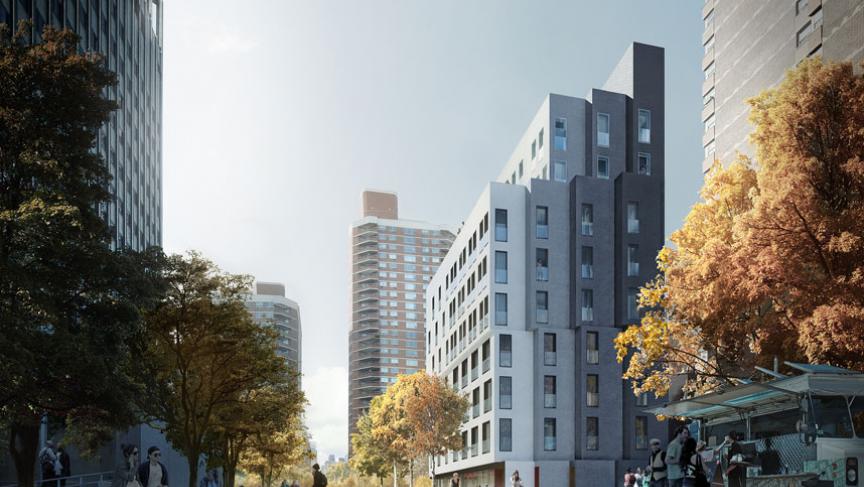 In a city that has 1.8 million one-and two-person households, but only 1 million studio and one-bedroom apartments, it's time to get creative.

The Brooklyn based firm, nARCHITECTS, was part of the developing team for My Micro NY, the contest's winner.

Eric Bunge, co-principal architect with nARCHITECTS, says the units they designed have two general areas, because people need both amenities and freedom of expression.

"We thought it would be best not to overdesign the units, so each unit has what we call the 'toolbox', which is where you have your kitchen, bathroom, storage and 16 feet of overhead storage," he said.

The other portion of the unit, called the 'canvas,' has 9-foot-high ceilings with nothing else, leaving it to the resident to decide what to do with the space.

Having higher ceilings gives a sense of space and allows for overhead storage, Bunge said. But it also gives the feeling of living in a larger volume.

The apartment building will include community spaces and group amenities such as a bike room. On top of the building, Bunge says, there's going to be a community garden or plots for the residents to grow things.

"Underpinning the need for this communal list is this idea that people living in small spaces need to live in expanded senses of community," he said. "There's a little den on every floor, but there's also a very important creative space on the ground floor."

The construction of the modules will only take a matter of weeks because they stack on top of one another. Everything is already built in, ready to go.

"It's going to be a very spectacular moment in Manhattan when suddenly these modules go up in a couple of weeks," he said.

Though the units are recommended for one to two people, Bunge says when he and his wife first moved to New York, they lived in a 350 square foot apartment for four years.

"We managed to do that merely because it's New York," he said. "One of the things people come here for is the life outside the apartment. I think we'll see a very interesting spread of people who might be interested in this."