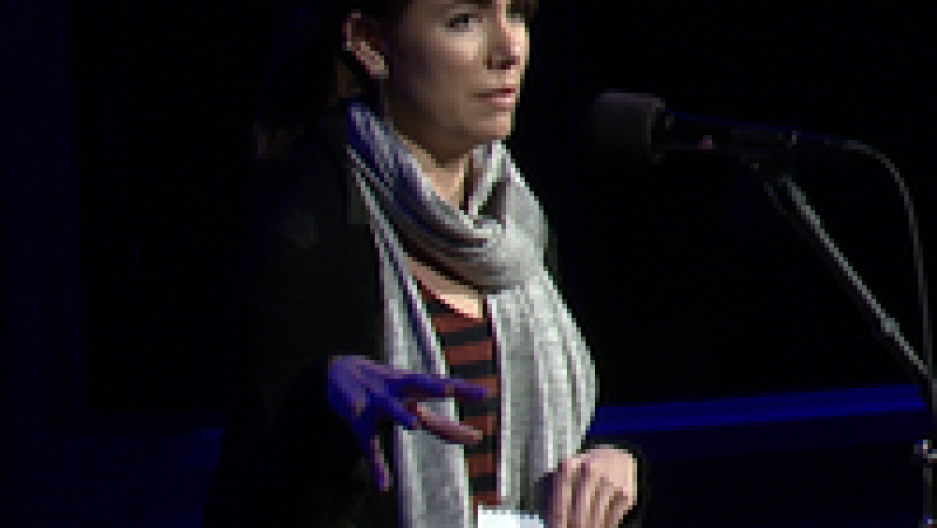 Meehan Crist tells the story of her mom at a storytelling event in New York City. (Photo courtesy of The Greene Space.)

Memory is one the oldest subjects in literature, and one of the hottest topics in current neuroscience.

Meehan Crist, the writer in residence in biological sciences at Columbia University, has been working on a book about traumatic brain injury. Her obsession with the topic started close to home, when her mother suffered a concussion and began forgetting things.

All kinds of things. Where she was driving. How to read.

When she crossed the threshold from one room to another, she would forget where she was and had to sit down to try to recall. Her handwriting changed and the bank called to ask if someone was forging her checks.

But Crist didn’t know this as a child; her mother hid what was going on, and Crist was an adult before she broke family taboo by asking about the injury.

Learning the truth about her mother’s accident led her down a new path of study and research and finally to a dissection lab, where she held a human brain like a relic in hopes of uncovering its secrets.

“If you ask a neuroscientist, ‘How much do we know about the brain?’ they’ll tell you we know about zero to five percent. Which is fantastic, because there’s so much left to learn.”

Editor's Note: Crist's story is one of many told at an event hosted by Studio 360 and the Story Collider. See more stories.