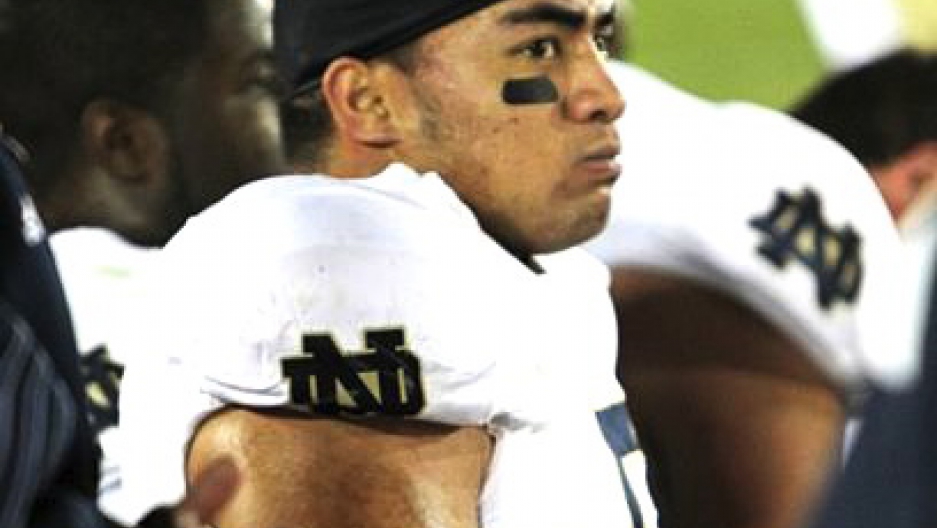 Manti Te'o is a potential first round pick for the NFL draft. (Photo by Neon Tommy via Wikimedia Commons).

Manti Te’o, the star linebacker for the University of Notre Dame, potential first round pick for the NFL draft and a Heisman trophy candidate, was hoaxed.

Or so he says.

In an investigative report by sports website Deadspin, reporters proved that Te’o's girlfriend, who he said passed away from leukemia in September 2012, never existed.

The online romance between Te'o and a fictitious girl named Lennay Kekua went on for years, through a car accident, a coma and, eventually, cancer. Te'o discussed his relationship with her with the media, saying it was a motivating factor in his standout year.

So, when Te'o led his team to victory as his grandmother and girlfriend were both thought to be severely ill, the media ate it up.

When Te'o said he lost both his grandmother, at the age of 72 on Sept. 11, 2012, his girlfriend on the same day, it became a major story and a narrative throughout Notre Dame's season. Only, while his grandmother did die, there was never a girlfriend to begin with.

What remains unclear is who, exactly, knew that she never existed, and when.

Te’o and Notre Dame claim he is a victim of ‘catfishing’, by falling into a relationship with an identity made up on social media.

Amalie Benjamin, sports reporter for The Boston Globe, says Notre Dame knew for quite some time that this was a hoax before they reported it. Jack Swarbrick, the university’s athletic director, said in a press conference he’d known since Dec. 26 that Kekua was made up. He said Te’o and his family had planned to make the story public, eventually.

"But Deadspin reported it and (Te'o's family) had to deal with the fallout in the last 24 hours," she said. "Certainly going forward there's going to be a lot more that we hear about this story."

Benjamin met with Te'o and his father, Brian, in November and spoke with Te’o about his relationship with Kekua.

“They were both very genuine, very sincere,” she said. “Brian Te'o, his father, talked about how he thought (Kekua) was going to potentially be his daughter-in-law. It's very strange to look at that in retrospect — we're still wondering how much did Manti Te'o know?“

Benjamin says there are still things about Notre Dame's hoax claim that don't add up.

Deadspin received a tip about Kekua being a fake and began looking for an obituary for Kekua, or any information proving her existence. Eventually, Deadspin combed through pictures purportedly of Kekua, and traced them back to a different woman from California who'd never met Te'o and had posted all of the photos in question on the Internet.

That so many sports journalists bought into this story of a non-existant girlfriend, has caused a great deal of conternation in journalism circles, as well as in the public.

But Benjamin says, there are times when you have to trust your sources.

"I had two different people talk about this woman and at this point she'd passed away, so it's not possible for me to go find her,” she said. “Perhaps this is something that will make us a little bit more wary about stories like this."

Deadspin pinned the hoax is on someone Te’o knew from growing up in Hawaii. Some have accused Te’o of being involved with the hoax, Benjamin said. Neither story has been proven so far..

A previous version of this story misspelled the last name of Lennay Kekua.