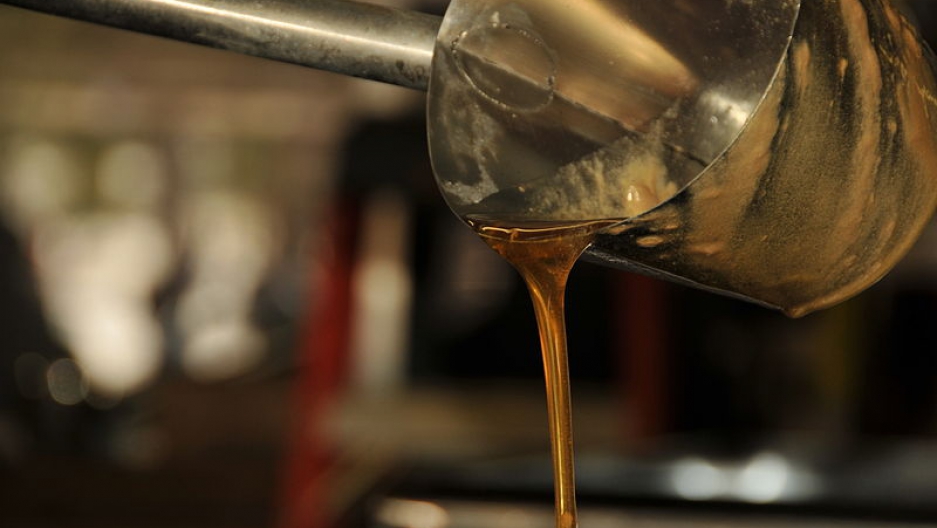 Millions of gallons of maple syrup were stolen last year from a reserve that belonged to the Federation of Quebec Maple Syrup Producers.

If it sounds too bizarre to be true, it's not. The federation stores maple syrup and uses OPEC-style production and sales quotes to ensure a stable price for maple syrup.

The stolen syrup, worth about $18 million, is the largest agricultural theft, ever.

That said, Brendan Borrell, reporter for Bloomberg Businessweek, says maple syrup isn't the most financially important agricultural product in Quebec, but rather a component of national pride. So this theft hit many Canadians where it hurts.

"The Prime Minister takes the best maple syrup when he goes abroad and they've got a smorgasbord of maple products that they're proud of,” he said.

Two hours northeast of Montreal, a large warehouse was filled with barrels of maple syrup. The maple syrup was kept there, Borrell said, because Quebec developed what it called its global strategic stockpile, to help stabilize syrup prices. Part of the problem with syrup, for producers, is there are only about 20 to 25 days at the end of winter where trees are producing sap, Borrell said.

Over the years, producers started banding together to save their syrup, sell it, and dole it out over the course of the year, Borrell said. And it proved to be a tempting target for thieves.

"They had about 16,000 barrels in there from the previous season and it wasn't until they opened the doors this year, they began to realize that there was some syrup missing,” he said.

Some barrels were empty, while others were filled with water. In order to move the approximately six million pounds of syrup that were stolen thieves would have needsome 100 tractor-trailers, Borrell said.

The strategic syrup reserve dates back a deacde. By 2002, producers had started talking about a need for a quota system and a need to be like a cartel, to tightly control their syrup. That's where things began to unravel, Borrell said.

"It's not just that people don't want to be part of the federation, but you can't always be a producer even if you have land with maple trees on it,” he said. “Unless the federation has given you an allocation, you're not allowed to produce syrup."

People who wanted to produce more syrup, or ended up producing extra syrup in the course of the year and needed to unload turned to willing buyers like Etienne St. Pierre, Borrell said.

“Producers there can make as much as they want. And whoever wants to buy it can buy it,” he said.

St. Pierre took advantage of this, Borrell says, and offered an option for producers in Quebec with too much syrup, to bring it over to New Brunswick. He would then buy the syrup, keep their names confidential, give them a great price, and pay them promptly.

But what St. Pierre did is now part of an ongoing legal dispute, Borrell said.

"(St. Pierre) was violating a civil law. The Federation had gotten approval from the Quebec province to be kind of the body that determines the rules and the marketing of syrup,” he said. “They can sue St. Pierre in civil court and he's been battling them for four years now."

But St. Pierre has also become ensared in the investigation into the theft from the strategic syrup reserve. Turns out, St. Pierre ended up with a great deal of the stolen syrup, though, to date, no one has accused him of being involved with theft, Borrell said.

It’s currently unknown how much he knew about where the syrup came from, however, St. Pierre is among those facing charges relating to the theft.