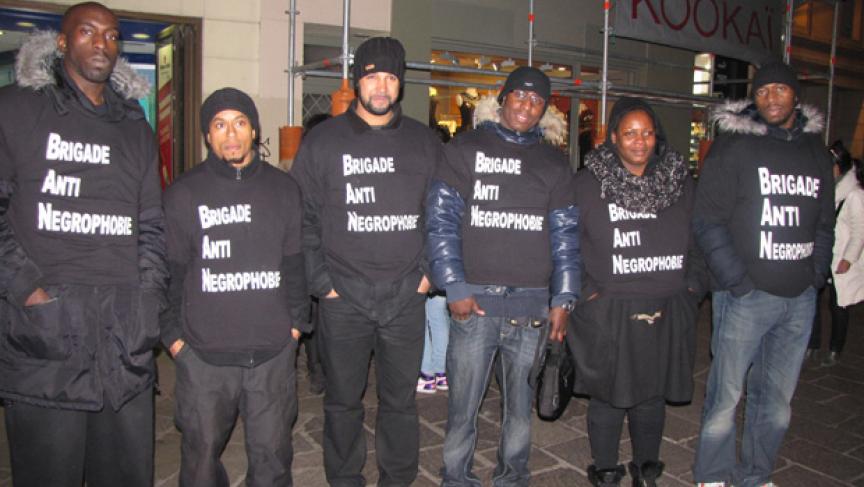 The 'Brigade Against Anti-Black Racism' is conducting street outreach as a part of the Collective Against Racial Profiling, an initiative that emerged from a State Department-funded U.S. trip. (Photo by Amy Bracken.)

Among the plumb posts President Barack Obama is expected to refill this year is the post of Ambassador to France.

The current holder of that position is Charles Rivkin, the former CEO of the Jim Henson Company, in Hollywood, and a major contributor to Obama’s first presidential campaign. He will be remembered for his attention to neighborhoods traditionally ignored by high-level public officials.

When Rivkin once told a reporter he wanted to go where no American ambassador had been before, he was referring to the low-income, ethnically diverse suburbs of Paris. To Villiers Le Bel, a largely West African community that was partly destroyed by riots in 2007, Rivkin paid a visit to inaugurate a mural of Martin Luther King Jr.. After the ambassador’s speech, his delegation sang, “We Shall Overcome.”

U.S. public diplomacy has a long history in Europe. But the 21st century has seen a shift, with stepped up outreach to minority, especially Muslim, communities.

In France, where the policy is carried out by the cinematic Rivkin, it has been well-received in the immigrant suburbs.

Take, for example, the time Rivkin showed up at a minority-run media outlet with actor Samuel L. Jackson in tow.

“I’m a fervent supporter of this approach,” said Editor Nordine Nabili. “It’s not that I love Americans. It’s that we welcome anyone who wants to see what we do and exchange practices. When the ambassador came with Samuel Jackson, when the representative of the most important power comes and spends two hours here, with all the young people, it’s very important symbolically. It’s validating.”

It’s not just splashy visits, though. Rivkin and embassy staff have met with community organizations, they’ve invited young leaders, activists and artists to the ambassador’s residence and they’ve recruited candidates for State Department-funded visits to the United States.

The embassy launched the initiative during the George W. Bush administration, after 9/11.

“They had instructions from the State Department saying, ‘Do something Islam, so they did something Islam,” said Gilles Kepel, a French academic and expert on Islam in the Paris suburbs, known as banlieues.

He says it was more than anti-Americanism among Muslims that concerned State Department officials.

“They sort of thought that the French were characterized by a sort of political elite that was non-mixed, that was too white, too male, too old, and that if the country was not more pluralistic, then it would become weaker, and a weaker France was not good as an ally, so they started to reach out to the banlieues,” he said.

Two U.S. diplomatic cables, revealed by Wikileaks, laid this point out in embarrassing clarity. They slammed the French government for failing to integrate minorities into positions of power.

The Embassy in France declined to comment for this story, but it has posted on its website a long list of activities it’s carried out in the suburbs, as well as information on the International Visitors Leadership Program.

Alumni of that program include elites like current President Francois Hollande and former President Nicholas Sarkozy. But it’s been expanded to include people like Tara Dickman, the French daughter of South African immigrants. Obama’s former campaign manager recruited her for training in community organizing in Chicago, and that trip inspired her to create a group called the Collective Against Racial Profiling.

“Within a year, police profiling went from a sort of topic that didn’t exist to a major political stake,” she said. “Fourteen people went to court to sue the state, and then it became a major issue in the elections, there are three law proposals now ... and this is really thanks to this trip.”

But not everyone is happy with what the U.S. government has been up to in the banlieues. Among the critics is Nicolas Dupont-Aignan, a center-right member of Parliament.

“How will the U.S. government (answer) if the French government decided to go in some suburbs of the United States to say to the people, ‘You are not very well treated by your government, and we are going to help you. You are going to travel in France, be agent for us.’ It is not acceptable. It is not possible,” Dupont-Aignan said.

And he’s not the only one. Benjamin Pelletier blogs about international cultural influence. He says while the French government is not doing enough to reach out to its minority communities, that doesn’t justify the activism of a foreign power.

“What happens when you have a certain segment of the young population that has been influenced by another country acting in its own national interest?” he asked. “Isn’t there a risk of fracturing national cohesion?”

But others say the real problem is that French authorities don’t recognize the potential among suburban, minority youth.

“We’ve got an Arabic proverb that says, ‘When you want to do something, you find a way. If not, you find an excuse,’ and I think that those who accuse the U.S. (of interference) in French affairs, found an excuse,” said Sihame Assbague, a lobbyist for the Collective Against Racial Profiling.

Rokhaya Diallo, who went on a State Department trip to the United States, says American diplomats are, of course, acting in their own interest, but at least they’re paying attention.

“The ambassador of the U.S. is seen in the suburbs more often than the ministers of our own country,” she said. “Why is that? The US is identifying and courting people, while the French government continues to ignore them.”

Diallo believes the American government has caught on to something important: that a future Monsieur or Madame President may well emerge from one of those diverse, underserved suburbs.