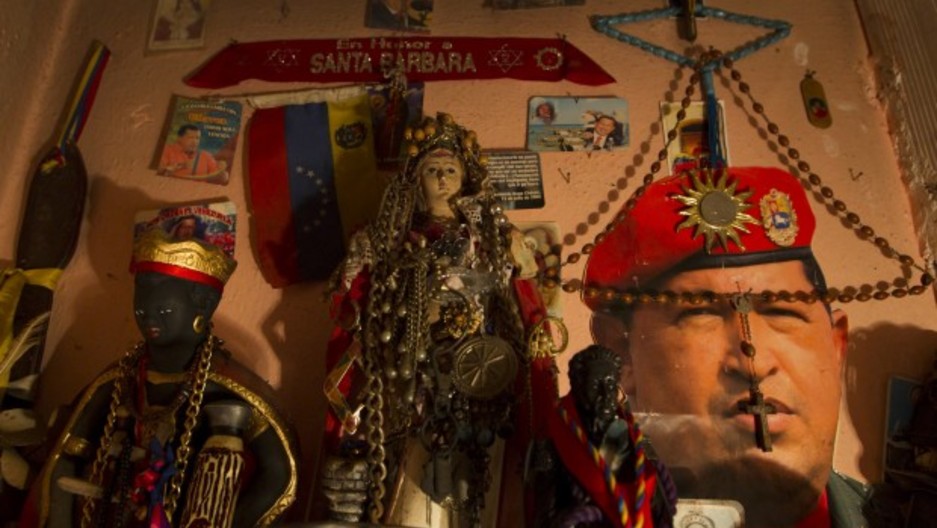 Pictures of Venezuela's President Hugo Chavez are seen at a religious altar in Caracas January 4, 2013. Chavez is still suffering a "severe" respiratory infection that has hindered his breathing as he struggles to recover from cancer surgery in Cuba, the government said on Thursday. The 58-year-old socialist leader has not been seen in public nor heard from in more than three weeks. Officials say he is in delicate condition after his fourth operation in just 18 months for an undisclosed form of cancer in his pelvic area. REUTERS/Carlos Garcia Rawlins (VENEZUELA - Tags: POLITICS HEALTH RELIGION)

Share
In Caracas, Venezuela, there is growing concern for the health of President Hugo Chavez who is reportedly experiencing serious breathing difficulties in a hospital in Havana, Cuba, where he has been undergoing surgeries and treatment for cancer. Chavez is due to appear at a swearing-in ceremony in Caracas on Januray 10th, and it seems unlikely he will be there. Reporter Phil Gunson in Caracas explains the constitutional path ahead in case President Chavez was unable to show up.