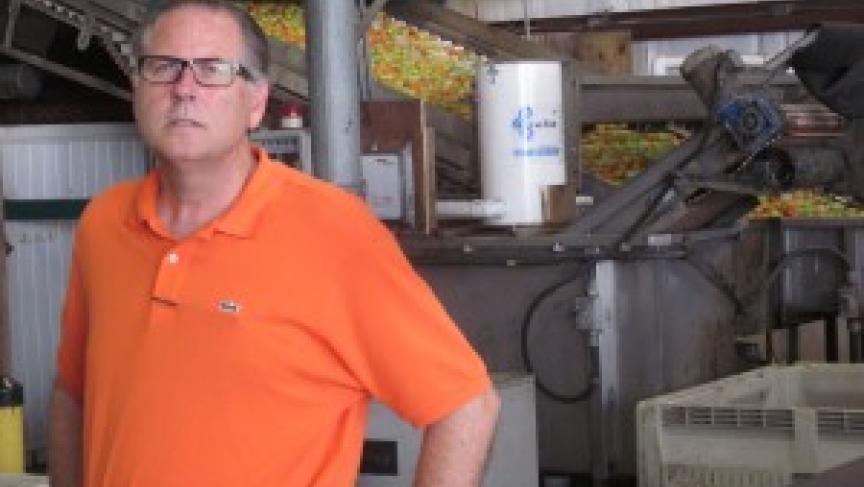 Tomato producer Bob Spencer is president of West Coast Tomato. The family-run business has been around for 70 years. (Photo by Jason Margolis.)

President George H.W. Bush, on Dec. 17, 1992 — some 20 years ago this week — signed the documents that made up the North American Free Trade Agreement.

Though it took a little more than a year to go into effect, because of the ratifications needed in Canada, Mexico and the U.S. Congress

NAFTA was controversial from the start when negotiations began in the mid 1980’s. Many argued NAFTA would bleed American jobs to Mexico. Others said it would be a boon for the American economy.

The trade agreement allowed for the free flow of fruits and vegetables between the U.S., Canada and Mexico. There have been winners and losers on both sides, but among the losers are Florida’s fresh tomato growers.

The state produces the most fresh tomatoes in the nation. But growers there say the free trade agreement has slowly damaged their industry.

Now, tomato growers, like Bob Spencer, are fighting back.

At Spencer’s packing operation, West Coast Tomato in the city of Palmetto, thousands of Roma tomatoes roll by every minute on big leather belts. Spencer pointed out cameras that were taking photos of each tomato.

“That picture is then sent up to these computers and it’s making a determination of the size and color of the tomato,” he said.

Tomatoes were dropping off into different chutes, then seconds later, streams of nearly identical green tomatoes plopped into 25-pound cardboard boxes, bound for the Northeast United States and Canada. Having uniform quality in tomato boxes ensures they’ll all be ripe at the same time.

On a typical day, West Coast Tomato packages about 750,000 pounds of tomatoes. Impressive, no doubt, but they’re running about a half million pounds below capacity. Spencer says their problems began shortly after NAFTA was signed some two decades ago.

“What’s happened is the acreage in Florida has dropped as the competition from Mexico has had a dampening impact on our prices,” Spencer said. “A lot of the people that I would go to conventions with 20 years ago are no longer here.”

According to the U.S. Department of Agriculture, fresh tomato production in Florida has fallen 41 percent since NAFTA went into effect. Meanwhile tomato production in Mexico has gone the other way. Florida tomato growers argue they can’t compete with the lower wages and lesser environmental oversight in Mexico.

Florida growers were concerned when NAFTA was first signed and tariffs on imported tomatoes were dropped. But Spencer said they knew NAFTA’s passage was inevitable, so they lobbied for as much enforcement as they could get. That included a 1996 deal that set a minimum price for imported tomatoes.

“Little did we know that the enforcement we bargained for was really not going to be any enforcement at all. The end result is we had Barney for our policeman; we didn’t have Andy,” he joked, referring to the Andy Griffith show.

Spencer’s point: enforcement of restrictions on prices of imported tomatoes has been weak. So, Spencer and other fresh tomato growers are asking the Department of Commerce to rip up the 1996 minimum price deal. That would then free them up to seek duties on imported Mexican tomatoes.

Florida growers say the old agreement sets the base price too low and hasn’t been updated appropriately to reflect current prices. And further, they accuse Mexican growers of dumping tomatoes onto the market below cost, also known as predatory pricing, to run them out of business.

That’s a difficult accusation to prove though. And one that Mexican tomato farmer Martin Ley said they’re not guilty of. Ley has been speaking on behalf of growers in his country. He said they’re outselling Florida farmers because Mexican farmers are producing a better product, and one that American consumers can get year-round.

“Mexico has brought a tomato that is ripened naturally, is ripened on the plant, is ripened while it’s getting all the nutrients, and all the sugars and plants,” Ley said. “And that’s why it is a good tasting tomato, naturally.”

Ley warns that if the Florida growers get their way, consumers would be the biggest losers — he said we’d have fewer tomato varieties that cost more.

And other American farmers could lose if Florida tomato farmers win. The Mexican government is threatening retaliatory tariffs if the Commerce Department sides with American tomato producers.

Ley said free trade and NAFTA have worked as advertised.

“The transformation of the Mexican tomato industry has been amazing. NAFTA really made things easy for us to bring technology, to bring equipment, to bring new varieties. Now there is all kinds of cocktail tomatoes, heirloom tomatoes, multiple color tomatoes, grape tomatoes, all kinds of stuff that has brought a lot of excitement to the store shelf,” he said.

And this is also not a simple case of Mexicans winning and Americans losing, said trade analyst Claude Barfield with the Washington think tank the American Enterprise Institute. He said Mexican tomatoes sold in American grocery stores are helping employ a lot of Americans.

“We have a very large sector that is dependent on trade — in terms of the support of cross border trade. And it’s not just the good itself, it’s not just a truck, but it’s the person who has to handle the financing, the people that have to handle the communications that bring this back and forth”

As well as lawyers and people stacking produce.

But Florida tomato producer Jim Grainger, owner of the Taylor & Fulton Packing Company asks, what about him? He said the federal government needs to stand behind American growers.

“I don’t want to see a foreign country put us out of business,” Grainger said. “(The federal government) helped the car manufacturers in Detroit for the same reason, or comparable reasons. And we’re just looking for the same treatment. I mean we’re not Detroit, we’re Florida. And we don’t want to be put out of business by the Mexicans or the Canadians. We want to still be in the business of feeding the United States of America, period.”

And for the record, Graninger says his tomatoes are better than the Mexicans ones, anyway.

“I don’t think they’ll ever be better than ours in the state of Florida," he added.

Another Florida tomato grower said the remaining tomato producers can handle two or three more bad seasons, then they’ll all be gone. And if that happens, he said, fresh tomato production in Florida will be gone forever.

Then, he warns, we’ll all be eating Mexican tomatoes, no matter which country’s tomatoes we actually prefer.