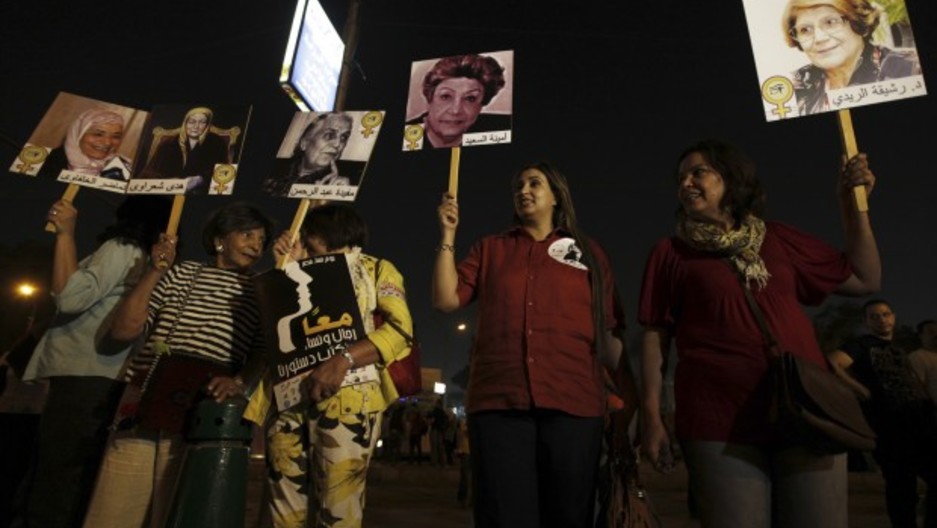 Women shout slogans as they hold pictures of former Egyptian women leaders during a protest against the Muslim Brotherhood and Islamic parties, and in support of women rights in the constitution in front of the presidential palace in Cairo October 4, 2012. REUTERS/Amr Abdallah Dalsh (EGYPT - Tags: POLITICS CIVIL UNREST)

Share
In Egypt, the 100-member panel that is writing the country's new constitution is struggling to create a document that will reflect what kind of country Egyptians want. The constituent assembly has been plagued by internal divisions and is now grappling with the resignation of around two dozen liberal and Christian members who say their recommendations are being ignored. On a recent Friday, around 10,000 Egyptians, most of them men, and many calling themselves Salafis – or ultra-conservative Muslims – rallied in Tahrir Square. Sheikh Hossam el Din is an ultra-conservative Muslim who refers to himself as a Salafi. He and many other Salafis say there's no question that Sharia law, or islamic law, is critical for Egypt,. "God said that if the people fear and believe they will have blessings in heaven and on earth. There will be justice and charity, said el Din. But that view isn't going over well with millions of Egyptians, like Makram-Ebeid, who was a member of the first panel writing the constitution. Makram-Ebeid quit along with other Christians and Muslims, who complained that the assembly didn't represent Egypt's diversity. A court agreed and dissolved it. But Makram-Ebeid says the new one is no better for liberal, secular, and Christian Egyptians. "They are absolutely terrorized. They are very concerned about what could happen because they could be treated as second-class citizens. They could be deprived of their real rights as a full-fledged citizen," she said. Now, members of the second panel are resigning. The role of religion in the new Egypt is a flashpoint issue – but it's not the only one. Many people are having a problem with the draft constitution. Women worry it doesn't give them the same rights as men, and rights advocates condemn its failure to ban torture and human trafficking. An Egyptian newspaper reports that some are upset with the use of "flowery language." In the seaside city of Alexandria, a new non-governmental organization is pushing for an article that guarantees fair treatment of Egyptian dwarves. Political analyst Said Sadek, who teaches at the American University in Cairo, said there are, "urban, rural, Bedouin, upper-class, middle-class, low-class, we have educated, half-educated, no education, and people who believe they are educated and they are not educated." The framers of the constitution appear a little fed up with all the complaints. Manar Shorbaghy, Deputy Secretary General of the constituent assembly, said: "We have been working since June and we're working more than 12 hours a day and it has been a long, exhausting process for everyone. By this time, now, we're all very stressed out. It [has taken] a toll on all of us. Shorbagy is a liberal and sympathetic to concerns, but thinks some of them are overwrought. She pointed to an article of the draft constitution, which has created an uproar. Article 68 says that said Egyptian women will have equal status with men – as long as that does not conflict with Islamic law. "You know, many people think that this article was added in this new constitution. This article has been there in the 1971 constitution. It's the same Xerox of this article. No change in a single word," she said. Yesterday nearly two dozen liberal members of the assembly withdrew from the process casting new doubt on whether the group can meet a deadline of December 12th to produce a final draft constitution. The penalty if they miss the deadline is unclear, but one scenario is that the assembly might be dissolved and the whole process will start all over again.