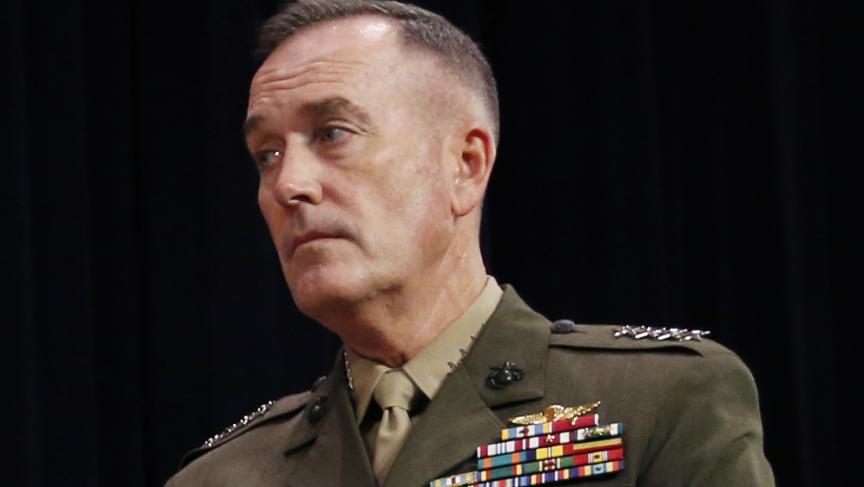 Share
Even before the Petraeus scandal widened, General John Allen's time as top US and NATO commander in Afghanistan was winding down. Last month, President Obama nominated General Joseph Dunford to replace Allen. If confirmed, Dunford would become the sixth American commander to lead the war in Afghanistan since the conflict began 11 years ago. The World's Jason Margolis has more. Very little is known about General Dunford. Unlike other high-ranking generals, Dunford hasn't been much in the public eye. Defense Secretary Leon Panetta has praised Dunford as "an exceptionally gifted strategic leader." President Obama has urged his quick confirmation. I went through my Rolodex of military experts and insiders today, and person after person said they didn't know enough about Dunford to comment. Marine Veteran Paul Kane does know the man though. Paul Kane: "I'm on a first name basis with him: My name is Paul, and his name is Sir." Kane served under Dunford training the first Marines that entered Iraq before the war began. Kane is also a former fellow at Harvard's International Security Program. Kane went on to serve Iraq, along with Dunford, who made his name at least among other Marines. Paul Kane: "He was the commander for the Fifth Marine regiment, which was during that initial part of the war in Iraq one of the most active and involved with some of the heaviest fighting. He has a nickname, he's known in the Marine Corps as fighting Joe Dunford because of that particular command." In 2005, Dunford returned to the Marine Corps headquarters in Washington. He rose up to become the second highest ranking officer in the Marine Corps. Paul Kane: "The role he's had in the Marine Corps is assistant commandant of the Marine Corps, which is essentially the chief operating officer for the Marine Corps, so he oversees the day to day operations of the United States Marine Corps." When Dunford took over that task, the US military was exiting Iraq and surging in Afghanistan. Dunsford has been to Afghanistan, but has never served a tour there. Tom Donnelly with the American Enterprise Institute in Washington says this makes Dunford a curious choice. Tom Donnelly: "The question is not what's right about General Dunford, which there may be a lot, but how come General Rodriguez who is the natural successor to General Allen isn't getting the job?" Donnelly was referring to General David Rodriguez who has spent significant spent time in Afghanistan. Donnelly says he thinks the White House tapped Dunford because he's divorced from the Afghanistan surge and is not emotionally tied into the operation. Tom Donnelly: "So, I think this is at least in part a way of giving the White House a freer hand in designing the policy and then outlining the pace of the drawdown between now and 2014, and in defining whatever the residual force might be." Accurate or not, political scientist Stephen Biddle at George Washington University doesn't see Dunford's lack of experience in Afghanistan as a positive. But… Stephen Biddle: "The administration clearly does not believe that that kind of experience is necessary — General Allen didn't either before taking command in Kabul, nor did General Petraeus for that matter." Biddle has met Dunford once. He describes him as "thoughtful and smart." And Biddle says while Dunford isn't as well-known as some other generals… Stephen Biddle: "Obviously he's had a very accomplished military career, no one reaches this rank and an appointment like this without that." Marine Veteran Paul Kane thinks Dunford is the right man for the job. He described him as a "straight shooter, no nonsense, and loyal." Paul Kane: "I live about 20 minutes from the Bethesda Navy Hospital where there are a lot of very seriously wounded soldiers and Marines. I had a friend who was out there in the hospital, and half the times I would be going into visit him General Dunford would be there, not in uniform, just making the rounds at the hospital to visit these wounded soldiers and their families. So he is an exceptional leader." If confirmed, Dunford would preside over the withdrawal of 68,000 American troops by the end of 2014. And it's highly likely that Dunford's name would be forever mentioned in the history books as the last leader of a full contingent of American troops in Afghanistan.