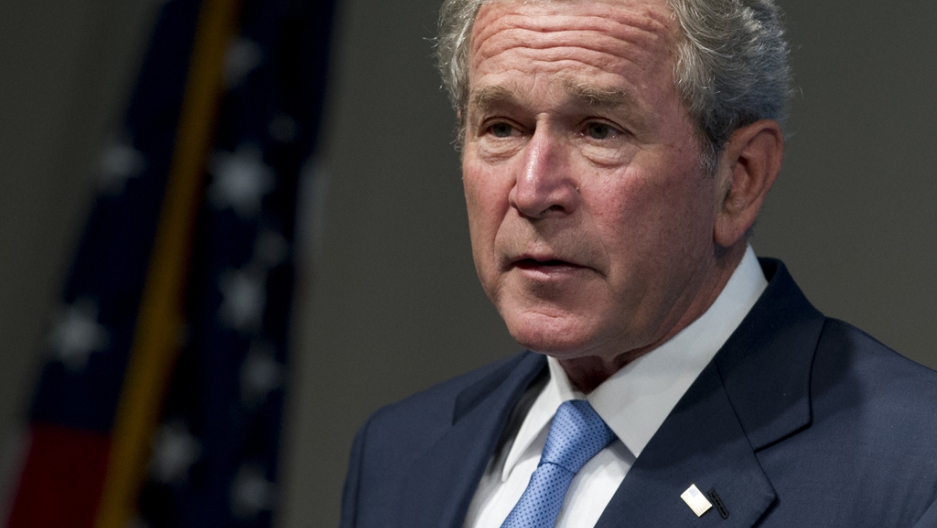 Former US President George W. Bush speaks during an event celebrating the successes of dissidents and activists from around the world, hosted by the George W. Bush Presidential Center in Washington, DC, May 15, 2012.
Credit: SAUL LOEB
Share

OWL’S HEAD, Maine — After eight years of Bush and his failed wars and collapsed economy, it seemed a rational choice for many independent and moderate Republican voters who had supported Bush to vote for Obama. So what is the rationale for many of those same voters switching this year back to the Republicans?

The proclaimed justification is that President Obama hasn't pulled the economy out of the financial collapse that, some seem to have forgotten, occurred as the climax to eight years of a Republican presidency. When Obama was sworn in, the country was in the midst of an unfurling financial crisis that was the worst we had experienced since people were jumping out of their Wall Street windows in 1929.

Have they forgotten it was a Republican president and his policies that nearly finished off our financial system? The conventional reasoning among voters switching to Romney and, as he termed it during the Republican primary debates, his "severely conservative" politics, is that Obama hasn't gotten us out of the recession fast enough. We need to return to the party that created the mess in the first place.

Which is a bit like someone suffering for years under the care of a lousy doctor. The patient ultimately collapses, ends up near death in the emergency room, begins the long road back to health under the care of a reputable physician — and then decides what he needs for a speedier recovery is to return to the quack who was the original cause of his problems.

True, Romney isn't Bush? Or is he? He's switched suggested remedies for what he sees as ailing us so often that it's anyone's guess what he would actually do. One thing we know for sure, his economic fix — tax cuts, defense spending increases, and deregulation — won't work: the numbers don't add up. No wonder he's refused to give us a road map to get there.

Not only did Obama's economic remedies — specifically the $800 billion-plus stimulus bill — work, they did so in spite of Republican intransigence. Republicans denounced the bill; it only managed to squeak into law with a handful of Republican votes.

It's usually impossible to compare actual programs against ones never adopted. So the Republicans can blather on about the explosive federal debt under Obama without having to compare Obama's recovery program to a viable alternative. But unfortunately for Romney, there is a perfect example of an undertaking by Obama versus a preferred Romney approach: General Motors. Romney was against what has been an overwhelmingly successful government bailout to revive General Motors and the tens of thousands of jobs associated with it. Romney would have let it go into bankruptcy, after which, he says now, private investors would have come to the rescue. A complete fabrication: no private investors would have stepped up to the plate at that time with the economy in free fall.

Similarly, without the actions Obama took, our unemployment rate would still be in double digits, and our economy, like those of European countries who opted for the austerity route, would be slipping back into recession.

But if the stimulus was a success, Obama can be legitimately criticized for his failure to react favorably to the recommendations of the Simpson-Bowles commission, which he created with a bipartisan mix of Republican and Democratic congressmen, professional economists, and businessmen. The beauty of the commission's recommendations — which had bipartisan support (and bipartisan opposition) among its 18 members — was it required a mixture of spending cuts and tax increases. Everyone's sacred cow got gored.

The approximately $3 in cuts for every $1 in additional tax revenues offended liberal Democrats and conservative Republicans equally: all three Republican House members, including vice-presidential nominees Paul Ryan, voted against it, but so did two Democratic congressmen and a Democratic senator. By contrast, all three Republican senators were supporters. Unfortunately, with only 11 of the 18 commission members in support, and a super-majority of 14 required, the commission did not approve its final report. However, rather than taking the report as the starting point for a serious discussion on how to deal with our debt — "how to achieve fiscal sustainability over the long run" as Obama had charged the commission with when he created it — he bowed to the liberal elements of his base and ignored the commission's finding altogether.

But Obama's failure does not hide the fact that under a Republican administration, such a comprehensive package of tax and debt reform would be out of the question: Romney enthusiastically supports — or so he has pledged in the past — Republican extremist Grover Norquists's “no tax increase” pledge; like all the other Republican candidates, he publicly announced he would refuse to consider raising even $1 in taxes for $10 in spending cuts.

One can argue that Romney has pulled a 180 on everything else, so why not on this? Quite apart from the inanity of voting for someone who you hope turns out to be a liar, the no-tax pledge, signed by over 90 percent of Republican House members, is something that even a new, new Romney would not take on.

On foreign policy, as on the domestic front, Obama has had serious successes at a time of great upheaval in the Arab World — the killing of bin Laden, the overthrow of Qaddafi, the exit from Iraq, the 2014 planned departure from Afghanistan — policies that the new Romney apparently supports. Obama has had no success in resolving the Palestinian-Israeli stalemate, but then, neither has any other president over the last 45 years.

Romney has made it clear, repeatedly, that under his presidency, whatever Israel wants, Israel will get, regardless, apparently, whether or not it is in the best interest of the United States. With Arab countries in turmoil, seeking to free themselves from decades of dictatorship, a Romney presidency would cement a wedge between the US and hundreds of millions of Arabs and close to a billion Muslims worldwide, in support of an Israeli intent on indefinite occupation of millions of Palestinians.

It's hard to understand why independents and moderate Republicans who voted for Obama for his first term would now prefer a president who would turn his back on our climb out of the Bush recession while pursuing international policies that would severely damage our foreign relations with a large part of the developing world.

And that's without considering that the next president will probably get two Supreme Court appointees: an opportunity, on the one hand, to lock the court into a far right mindset for decades; or, on the other, to bring it back to the constructive center. Indeed, taking a long-term view, this may be the most compelling reason to vote for Obama.

Finally, even Republicans are appalled at two of their Senate candidates' approach to rape, be it the so-called "legitimate" variety advocated by one, or the requirement, citing God, that raped women who become pregnant must bear the rapist's child. Some Republicans have more in common with Taliban mullahs than with mainstream America.

Incidentally, "Inherit the Wind," the great Spencer Tracy/Fredric March movie was on television the night Hurricane Sandy was teaching us something about the effects of global warming. The movie was a fictional rendering of the famous Scopes "monkey" trial in Tennessee in the 1920s in which a high school scientist teacher was jailed for teaching Darwin and evolution. They may not be putting teachers in jail any more, but local school boards in Republican red states are making sure evolution is not taught in their public schools. Do we need more of this?

Putting Romney in the White House will move this country further backwards, economically, internationally, and socially.

Mac Deford is retired after a career as a foreign service officer, an international banker, and a museum director. He lives at Owls Head, Maine and still travels frequently to the Middle East