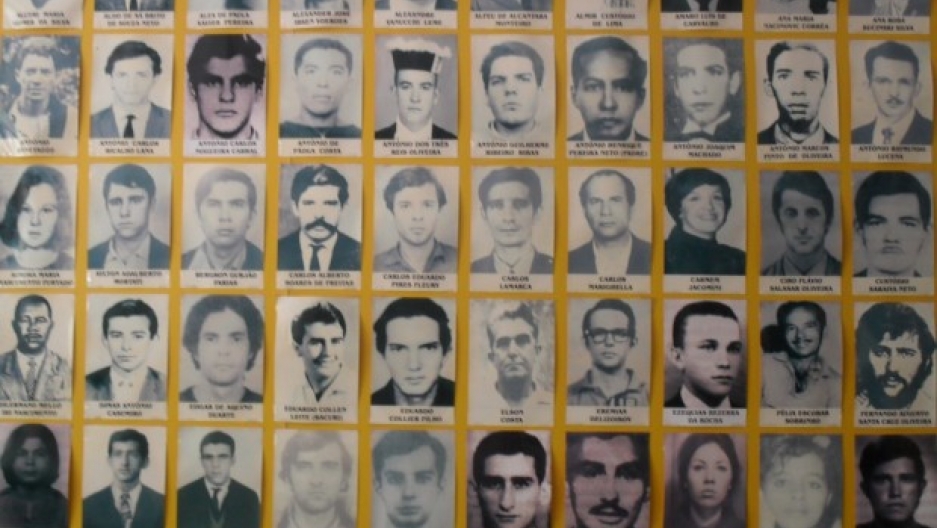 At the Torture Never Again office in Rio de Janeiro, one of the walls is filled with photos of Brazilians who disappeared during Brazil's military dictatorship, 1964-85. (Photo by John Otis.)

Between 1964 and 1986, hundreds of Brazilians were killed and thousands tortured under a military dictatorship.

Among the torture victims was Brazil’s current president, Dilma Rousseff.

Now, a government truth commission is investigating these abuses. But the commission has come under fire from military officials, as well as from torture victims themselves.

Cecilia Coimbra is one of them. In 1969, Coimbra provided a safe house for Marxist guerrillas who briefly kidnapped the U.S. Ambassador. Soon afterwards, Coimbra was arrested.

She says interrogators shocked her with electric wires. At one point, she says, intelligence agents removed her clothes and placed a small crocodile on top of her.

“I can still feel its cold skin,” she said.

Brazil is a world economic power today, but the country lags far behind its neighbors when it comes to examining its dark past. In Argentina, Chile and Uruguay, hundreds of military officers have been convicted of human rights abuses that occurred during their so-called dirty wars. In contrast, not a single Brazilian military officer has ever been charged with torture or assassination. They’re protected by a 1979 amnesty law.

But legal and political pressures are mounting. In March, a huge protest broke out in front of the Military Club in Rio de Janeiro when retired officers gathered to celebrate the 1964 coup that ushered in the dictatorship.

The Inter-American Commission on Human Rights recently ruled that Brazil’s amnesty law doesn’t apply in cases of gross human rights violations. Brazil did not comply with the ruling, but last year, President Rousseff announced the formation of a truth commission.

It was an emotional moment because Rousseff, a former Marxist guerrilla, was captured and tortured by the military in 1970.

The truth commission began work in June. But its seven members have just two years to investigate decades of human rights violations by both the military and Brazil’s now defunct guerrilla groups.

What’s more, there won’t be any legal consequences because the amnesty law remains in place. There won’t even be public hearings that might have allowed torturers to come clean about past abuses.

Coimbra and other victims say the truth commission is a sham, designed to polish Brazil’s image abroad.

Victoria Gabois, who heads Torture Never Again, a group that lobbies on behalf of torture victims, says Rousseff would have preferred a stronger truth commission, but she bowed to pressure from Brazil’s still-powerful military.

“Brazil’s former companions in the armed resistance are making deals with the military and the oligarchs of Brazil,” Gabois said.

Without the Inter-American court ruling, there would be no truth commission in Brazil. Still, some military officers see the commission as a threat. They fear it could be the first step toward repealing the amnesty law, which is the only one of its kind still on the books in Latin America.

According to Navy Admiral Ricardo Veiga, president of the Naval Officers Club in Rio de Janeiro, the military’s past abuses were a natural reaction to a growing guerrilla threat. The fact that a former guerrilla is now president, he says, proves that Brazil has overcome the trauma of those years.

Even among average Brazilians, there is little interest in digging up the past. Many are too young to remember the dictatorship. Plus, the number of people killed or tortured was far lower than in most other Latin American nations. Many of the perpetrators are now elderly or have died.

Coimbra, who is now 71, says achieving closure doesn’t necessarily require trials and prison sentences. She would simply like her interrogators to show their faces and publicly admit they tortured her.