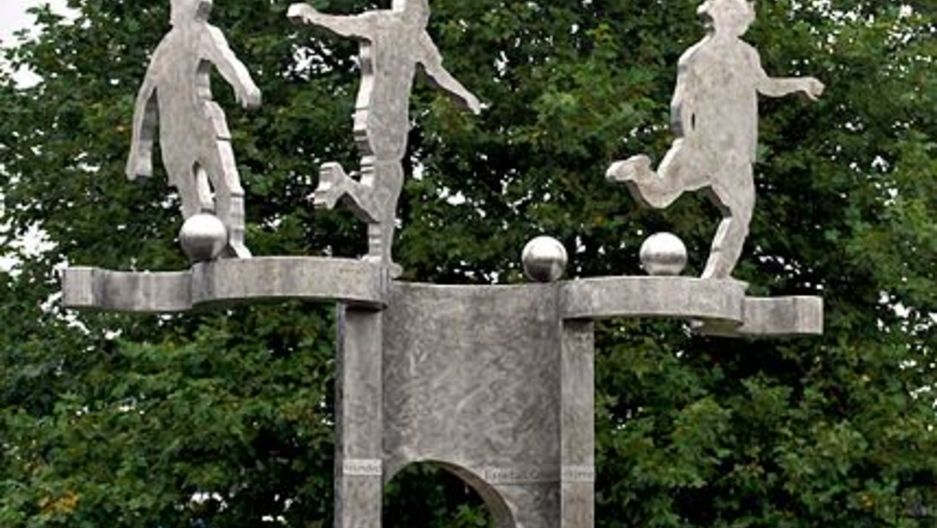 Commemorative sculpture for the old Baseball Ground in Derby, England.

Share
Okay. A bit of strange one Friday for our geography quiz. We're looking for an unlikely baseball hotspot. No, don't look south of the border. Instead, turn your attention across the Big Pond, to England. Baseball, America's Pastime, has actually been played in Britain since the 1890s. That's thanks to a local businessman who brought the game back after a visit to the United States. Our mystery location is the English city where baseball first took hold. Look to the East Midlands, and try to find a city of about 250,000 people. One last clue – this city's old soccer stadium was called, for more than a century, the Baseball Ground. That stadium has been torn down, but a commemorative sculpture, which admittedly has nothing to do with baseball, still remains. Got it? The Baseball Ground once stood in the English town of Derby. Now, some Brits still love baseball. In fact, the BBC is doing live broadcasts of every World Series game. Friday, I got the chance to listen to the broadcasts, and interview Simon Brotherton and Josh Chetwynd, the BBC's play-by-play man and color commentator respectively. And you do have to give Simon Brotherton serious credit. He's a veteran BBC sportscaster, and as such he's spent most of his career broadcasting things like English soccer, and the Tour de France. But he's got baseball play-by-play down pretty well. "Baseball is one of my great loves. It's my hobby, and has been for years," Brotherton says. "Football, soccer, is something that I grew up with…it's part of who I am, whereas baseball is something that I do still need to to think about." Still, when you listen to Brotherton call a game, it's clear he's gotten the nuances. He uses terms like "hit-and-run" and "small ball" fluidly. Maybe that's because of his buddy in the booth. "It's all about getting your head around not just the terminology, but also where you need to be looking at the right time," says Josh Chetwynd, who is the BBC's color commentator for American baseball. Chetwynd was born in Britain, but grew up in the US. He played college baseball here, and spent some time in the minors. Then he returned to Britain to play for the National Baseball Team. Chetwynd eventually ended up in broadcasting, and found that baseball had a loyal fan base in Britain. "I think loyal is the key word. It's not huge. It's not a sport that rates with the big three in the UK – cricket, rugby and football, what we call soccer – but the people who care about it, care deeply about it," Chetwynd says. Brotherton and Chetwynd make a good team for the BBC. Brotherton handles the drama, while Chetwynd fills in the blanks. And they can chat about almost anything, including the pros and cons of the person singing the National Anthem. Brotherton says the key is remembering the audience back in Britain. "Don't forget that the World Series is going out the middle of the night. People who can't sleep, people on night shifts, people driving around in the middle of the night. We have to engage with those people who really don't know what's going on, and explain to them what's actually happening," he says. Brotherton's actually en route back to Detroit for Saturday night's Game Three. He was last there in 2006, when the Tigers lost to the St. Louis Cardinals. Brotherton rightly notes the Tigers now have a lot of work to do. "You know, they just haven't got started yet at all. And if they're not careful, the World Series will be over before they know it," he says. Look out Tim McCarver…sounds like Simon Brotherton is angling for your chair.