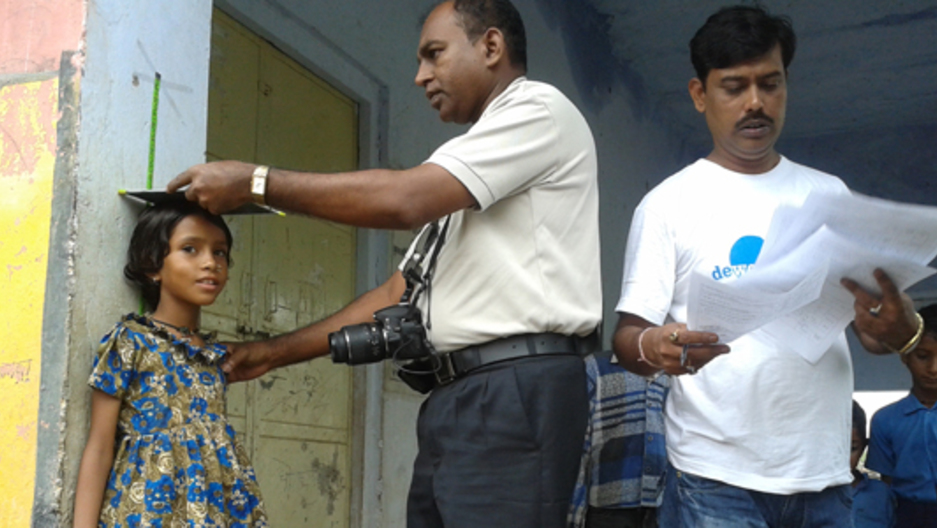 N.K. Gunawardena, an expert on instestinal worms measures the height of each student volunteer after theyre turned in their stool sample. (Photo: Rhitu Chatterjee)

Share
The Indian state of Rajasthan is about to launch a large-scale program to treat intestinal worms among its public school students. The idea isn't simply to make the kids healthier, it's to enable them to study harder and get ahead in life. Some visitors have arrived at a public school in the village of Deoli, in the western Indian state of Rajasthan. They gather in a classroom with a group of first- through fifth-graders and give each child a small, yellow plastic bag. One visitor, a young man named Dayanand Keshri, addresses the kids. "Now, look at what's inside your bags," he says. "Take out each item one by one." The kids remove the contents of the bags: a square piece of newspaper, a slim wooden spatula, and a small plastic jar with a screw cap. Soon, the presentation takes an awkward turn. Another visitor, a man named Ayan Chatterjee, holds up a piece of newspaper, places it on the floor, and squats over it. "You'll poop in the fields tomorrow morning, right?" he asks the children. Only a few people in the village have access to toilets. Most villagers relieve themselves in the open. "Just keep the paper under you like this, so you can poop on it, okay?" he says. The kids nod, but they look uncomfortable. A few exchange glances. They're unsure where this request is headed. In fact, they're being asked to collect stool samples and bring them back to class. It's all part of a program to help lift these kids out of poverty. Improving Health to Improve Education These public schools cater to some of the poorest children in India, and kids in poor communities are often heavily infected with intestinal worms — whip worms, hook worms, and round worms. The visiting team here is with a non-profit called Deworm the World. "We do an initial assessment of how many kids have worms, what worms are around the state, what the general prevalence is," says Ruth Dixon, the group's technical coordinator. And that's what the stool samples will reveal. Dixon says the government will then use that information to come up with a plan to treat kids in infected areas. But what does giving medication to kill parasitic worms have to do with improving the economic prospects of these children? A lot, it turns out. Kids with long-standing worm infections are lethargic and anemic, and often miss class. And that means de-worming children can dramatically improves their education, says Dixon. "We see increased attendance at school, increased concentration, and a lot more educational years in children who're regularly de-wormed," she says. In the long run, she says, this can help the children get ahead in life. Lasting Benefits Economist Michael Kremer of Harvard University has demonstrated the economic benefits of de-worming in a long-term study in a poor and rural area in western Kenya, near Lake Victoria. In 1998, a non-profit began treating all school children in the area for worm infections. The de-worming program was launched in stages. It was only by the third year that it was able to deliver medication to all schools. So by the time the program was fully launched, kids who were treated in the first year had had more than two years of worm-free existence compared to those treated last. Kremer says that the benefits of those additional worm-free years persisted for those children, who are now adults. "They have better self-reported health, they consume more meals each day, they're more likely to grow cash crops," he says. "They spend more time in entrepreneurship — more likely to start businesses." The success of this program led the government of Kenya to launch a nationwide de-worming effort. Other countries followed suit. In fact, the largest ever de-worming program was conducted in Bihar, one of India's poorest and most populous states. The Indian state of Rajasthan is the latest to join the trend. Preparing to Treat the Children Back in the village of Deoli, the team from Deworm the World has returned to the school the day after making its awkward request to the kids. The students stand in a line, ready to turn in the yellow plastic packets. A team of technicians collects the bags and hands each child a bar of soap and a biscuit, as a token of thanks. Ten-year-old Manjeet Meena has just turned in his sample. One of his teachers, Tulsi Ram Meena, asks him if the exercise was a hassle. "Yes," the boy replies. His teacher, Tulsi Ram Meena, laughs at his own skepticism the day before. "Well, initially I wasn't sure if the kids would cooperate [and bring back samples]," he says. But he's pleased that the students complied. And he's glad they will get free medication. "This will have a long-lasting effect on their health and their IQ," he says. Starting next week, these children and their fellow students across the state will receive their de-worming medication: a single pill that they'll need to take every six months. It will cost the government less than 50 cents per child. But those behind the program are hoping it will enable the students to move up the economic ladder. Twelve-year-old Lokesh Meena, the son of a farmer, envisions a more prosperous future for himself. I want a job, he says, with a computer.