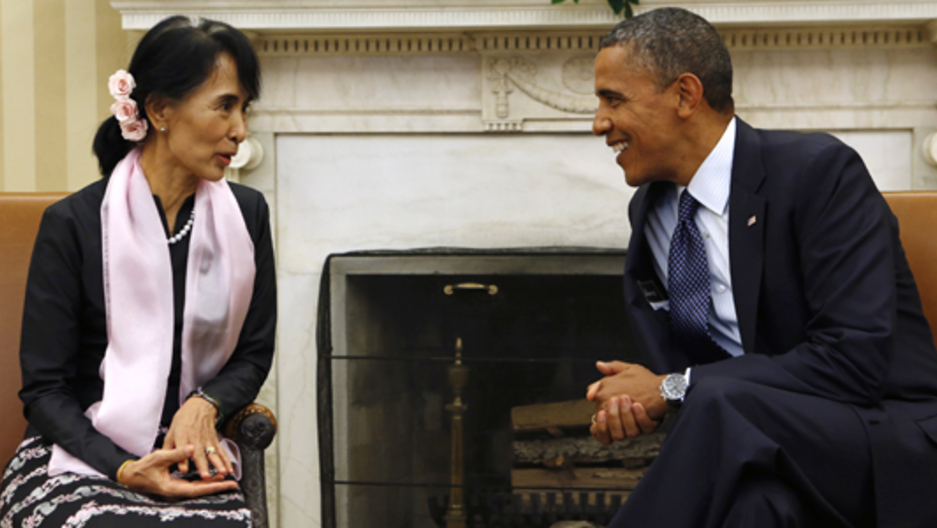 Share
Nobel Laureate and Myanmar opposition leader Aung San Suu Kyi has played a lot of roles in her 67 years: hero's daughter, Oxford academic, opposition leader, democracy icon. In April she added a new one. "I am now a member of the legislature," she noted on Tuesday, in her first public remarks during her US trip. Suu Kyi talked about the transition she and several other Burmese democracy activists are making as they settle into seats in parliament. "We are finding our way," she said. "We are beginning to learn the art of compromise – give and take – the achievement of consensus." One big part of finding her way is figuring out how to share public and political space with Myanmar President Thein Sein. Their evolving relationship has had some friction. Her trip to the World Economic Forum in Bangkok in May was so highly publicized that, at the last minute, Thein Sein canceled his trip there. Suu Kyi has also spoken out against one of Thein Sein's main goals: an end to US sanctions on Myanmar. "I think it's a relationship in progress," says Suzanne DiMaggio of Asia Society, a host of Suu Kyi's talk on Tuesday. "Let's keep it in perspective: he was a member of the military regime that had essentially imprisoned her all those years." This week, Suu Kyi modified her stance on US sanctions. She's now calling for an end to the few that are still in place. DiMaggio says this is one of several public moves Suu Kyi has made that helps lay the groundwork for Thein Sein's visit. "Not only did she endorse further easing of sanctions, but she also endorsed him, and his government," she says. In her speech, Suu Kyi said: "We must also remember that the reform process was initiated by President Thein Sein. I believe that he is keen on democratic reforms." And that point – that Thein Sein deserves credit for setting reforms in motion – is a crucial one, says David Steinberg, a Georgetown professor and longtime Myanmar watcher. He says it's getting lost in the fanfare surrounding Suu Kyi's visit. "Having them come at the same time, approximately, I don't think was a good idea," he says. "To my mind they need each other to make the reforms inside the country work. And I don't want to see their relationship jeopardized by her overshadowing him." Suu Kyi received Congress's highest civilian honor yesterday in Washington. She then met with President Obama. The meeting was announced quietly and there was only a brief photo-op for the press. That choreography seemed intended, in part, to avoid further overshadowing Thein Sein's visit. It remains to be seen if Thein Sein will have a similar meeting with Obama on the sidelines of the UN General Assembly next week. The decision could have implications for the still nascent relationship between the US and Myanmar, and the relationship between Aung San Suu Kyi and Thein Sein. Murray Hiebert, at the Center for Strategic and International Studies, says it could also have implications for Thein Sein's standing with the more hard-line elements in his own party. "It's very important for him to be encouraged, so that when he goes back…his opponents can't say, 'So you did all these reforms, you freed political prisoners, you opened the press, you opened the internet, and what do you get for it? President Obama refuses to see you when you go to New York,'" Hiebert says. Of course, the mere fact that people are discussing these issues of diplomatic nuance is testament to how much Myanmar has changed in the past year.